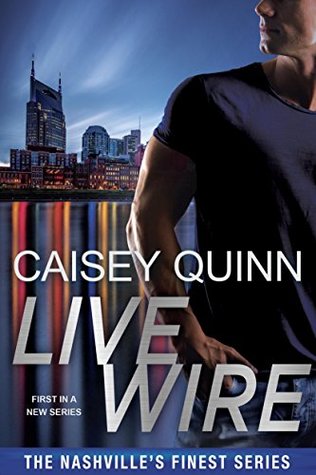 HE’S NOT AFRAID OF ANYTHING…

Explosive ordinance disposal specialist Chase Fisk never breaks a sweat defusing even the most complicated of explosives. So when a homicidal maniac threatens to set off military-grade IEDs during Nashville’s largest music festival, Chase is the man to take him down. But with the reappearance of a woman he thought was long dead, everything he thought he knew is blown away.

EXCEPT LOSING HER AGAIN.

FBI operative Vivien Montgomery is an enigma to everyone around her. So when a deadly threat lands her in Nashville and paired up with the only man she’s ever loved, she isn’t looking forward to an emotional reunion. She’s only here to get the job done and get out. But when the madman behind the chaos targets her for death, the one man she left behind might be the only person she can count on to save her life...

I’m not even gonna lie, I started off wanting to throw this book (or more specifically my iPad with the book on it) across the room. My jaw hit the floor when I read Vivien was dead. I was furious. I quickly closed it out, went to Goodreads and read the blurb and realized that I wasn’t going to have to give the book up after all. Vivien was alive and well, even if Chase didn’t know it yet. But boy, did that first chapter get my heart beating. (That’ll teach me not to read the blurb before starting the book.) Silly me. I should’ve known Caisey wouldn’t do her characters like that.

Once I got past my initial freakout, I loved this book. As addicting as Chase and Vivien were in Lit Fuse, they were ten times that in this book. I knew a romance between these two was never going to be easy and I definitely understood Chase’s feelings of betrayal, but there was more to all of it than met the eye. (And it totally crushed me at one point, too.) Vivien was dealing with her own demons and it was going to take some work for these two to find their way back to each other — where they belonged. It wasn’t easy, but it was passionate and had plenty of feels. And oooooh boy, the sexy times. These two had some seriously intense chemistry and the time apart did nothing to lessen it. I was cheering hard for the two of them because they were just so very perfect for each other.

The romance never took a backseat to the Music City Bomber situation, but I’d be lying if I didn’t tell you how much I got sucked into that storyline as well. I love when I read a book about a city I’m familiar with — and honestly love — because it makes me feel that much more like I’m right there. It made it easy for me to get the lay of the land as they were discussed various locations around Nashville, so I felt like I was living the story with the characters. Though thankfully MY time in Nashville hasn’t been THAT intense. I was on the edge of my seat as Chase and Vivien struggled against the clock to find the suspect and keep anyone else from getting hurt or killed, all as they tried to battle their feelings for each other. Live Wire gave great romance, but it also gave wonderful suspense. SO GOOD.

I loved everything about this book! I just can’t wait to see what Caisey gives us in the next Nashville’s Finest installment, Deadly Retribution. If it’s anything like the first two books, I’m going to love it.

“There was one thing, one thing I wanted to hold onto forever but couldn’t. So this was my reminder. My small piece of something I lost.”

“I told you before. I’m not sweet.”
“You’re still the sweetest thing I’ve ever tasted.”

“I’ve been trying to pretend to live when I’ve been dead inside since the day I thought I lost you.”

“I wanted to make love to you. But I’m going to die a thousand deaths if I don’t move faster and fuck you right now.”

Do you enjoy police officer heroes (and heroines!) as much as I do?
What are some of your favorite books featuring the men and women in blue?