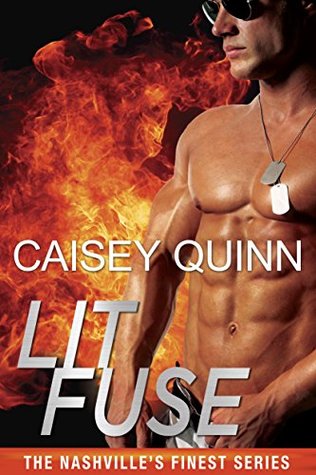 When Chase Fisk enrolled in the United States Army, it was mostly to escape a dead- end job working with his alcoholic father. The military provided him with a sense of belonging, and his brothers in arms became the family he never thought he’d have. He’s ready to embrace his promotion to Commanding Officer over a group of new explosive tech recruits—but he isn’t ready for her.

Vivian Brooks grew up in a military family and is unlike any woman Chase has ever met. The recently enlisted recruit is beautiful, tenacious, and as steady with her hands as any EOD technician he’s ever seen. She tempts him in every way possible, challenging him at all turns and taunting him with a body that haunts his waking moments and most of his sleeping ones. But as their forbidden romance could threaten their careers if it’s discovered, Vivian’s buried secrets threaten to destroy them both.

I’ve been waiting to see what Caisey Quinn would give us since I finished her Neon Dreams series in 2015. When I learned it was a military romance series set in Nashville, I couldn’t have been more excited. Now that I’ve read the novella, I’m even MORE excited… and anxious to get my hands on the first full length book! I need more of Chase and Vivian. Like, ASAP.

Chase and Vivian. Boy, did I love those two. First of all, Chase was hot AF. (I do have a thing for men in uniform. But, who doesn’t?) Vivian was all kinds of awesome on her own. I love a good kickass heroine and she was absolutely that. I read a lot of books, but I don’t stumble across many women in the military — and especially in a field as dangerous as bomb diffusing. That alone makes me want to be best friends with her. The fact that she was strong, smart and totally willing to go after what she wanted made me love her even more.

Together? Chase and Vivian were explosive. (Yeah, I went there.) They had intense chemistry from the very start. Their hookup was HOT. Of course, it was just supposed to be one night… but that was before they realized Chase was Vivian’s CO. Did I mention forbidden romances are one of my favorite tropes? Even as things progressed and they were determined that it be only physical, I wanted more for them myself. They were so well-matched that I can’t help but want, no NEED, for them to work out.

Caisey’s Nashville’s Finest series is off to a great start. I loved the characters. There are some great secondary characters I can’t help but be intrigued by, too. Lit Fuse was SEXY AF and there was some great suspenseful moments, too.  There is a fairly wicked cliffhanger at the end of this one — my heart starts pounding just thinking about it — so I definitely have all kinds of grabby hands for Live Wire.

This was something else, an insatiable hunger. A craving for a taste of something specific he wasn’t supposed to have.

Chase Fisk could burn her alive and reduce her to ashes. He’d lit the fuse that night and now she was a ticking time bomb waiting to detonate. Needing to explode. Soon. The blast wave could destroy them both, destroy their careers, their common sense.

Have you read any of Caisey Quinn’s books?
Do you have a favorite?