Welcome to my stop on the feature tour for JLA’s latest, Fire in You! I’m so happy to be participating today. 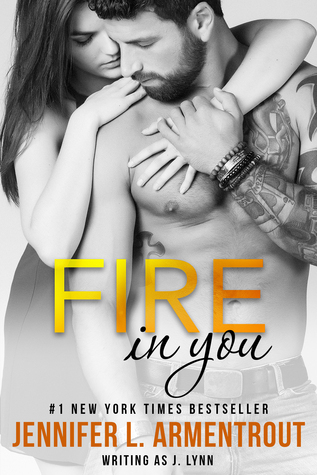 Fire in You by J. Lynn
Series: Wait for You #6
Genres: New Adult, Contemporary, Romance
Publication date: November 28, 2016
Publisher: Self-Published
Format: eARC, 360 pages
How I got it: From the author
Add it: Goodreads
Buy it: Amazon | Barnes & Noble | iTunes
My rating:

From the # 1 New York Times and International bestselling author, Jennifer L. Armentrout writing as J.Lynn, comes a richly moving story about heartbreak and guilt, second chances and hope. Full of familiar, fan-favorite characters and no two people more deserving of a happy ending, Fire In You will burn bright beyond the last page…

Jillian Lima’s whole world was destroyed in a span of a few hours. The same night her childhood love, Brock ‘the Beast’ Mitchell, broke her heart, her life was irrevocably altered by the hand of a stranger with a gun. It takes six years to slowly glue together the shattered pieces of her life, but Jillian is finally ready to stop existing in a past full of pain and regret. She takes a job at her father’s martial arts Academy and she’s going out on her first date since a failed relationship that was more yuck than yum. Jillian is determined to start living.

She just never expected Brock to be a part of her life again. But he’s firmly back in her life before she knows it, and not only is he older, he’s impossibly more handsome, more teasing and more everything. And when he sees Jillian, he’s no longer capable of thinking of her as the little girl who was his shadow growing up or the daughter of the man who gave him a second chance at life. He sees the woman who’d always been there for him, the one person who believed in him no matter what.

Brock knows she’s the one he should’ve made his, and what begins as a tentative friendship quickly turns to red-hot chemistry that sparks a flame that burns brighter than lust. Falling for Brock again risks more than her heart, because when the past sorrow-filled and guilt-ridden past resurfaces, and a web of lies threatens to rip them apart, the fallout could lay waste to everything they’ve fought to build together, and destroy the dreams of those they care most about.

Top 5 Books That Have Impacted Me
by J. Lynn

I gotta be honest, I’m feeling very sentimental as I sit down to write this review. I’ve been a fan of the Wait for You series since day one and I’ve laughed and cried my way through the series — sometimes reading the books even more than once — so it’s a little hard to say goodbye to it now. But, it went out just the way it should’ve… with Jillian and Brock’s story. It’s one I’ve wanted for so very long and it couldn’t be more perfectly timed.

Jillian did not disappoint. I loved her. It made me happy that she was moving on from her past and trying to really live again. She was a strong, amazing heroine. I wanted her to be happy, no matter how that happiness came. Brock, on the other hand, I wasn’t a HUGE fan of. (He did grow on me, though.) I held his past against him more than Jillian did. For someone who was supposed to be a friend, he treated her pretty shitty when they were younger. It wasn’t that he didn’t return her affections, it was just that he, um, behaved like a boy. So I tried not to hold that against him TOO much. I think a lot of guys his age spend more time thinking with … other parts … than with their brains or hearts. If Jillian could overlook it and move forward, I suppose its only right I do the same.

Despite my initial reservations about Brock, I really liked him and Jillian together. I liked who Brock was with Jillian back in his life. I’m a total sucker for friends to lovers books, so it’s really no surprise I enjoyed the two of them together. Their story felt real. I never doubted what was building between them. It didn’t feel fake or forced. It was natural… like these two were coming home to each other after all that time apart. It was obvious how much they cared for each other, so swooned right along with Jillian.

Fire in You was such a great book. I didn’t want to put it down once I started. Jen’s trademark humor and heart, as well as some steamy sexy times, made this one virtually unputdownable for me. I felt the feels and fell in love with the characters. I really can’t ask for more than that! What a great end to a series that I loved so very much. I feel a series reread coming on… soon.

“I want to let it all go. I do. And this is still scary as hell for me, but I want to start really living. I want to take risks and I … I want you.” 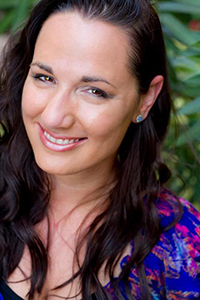 A pseudonym for Jennifer L. Armentrout.

All the rumors you heard about her state aren’t true.

Well, mostly. When she's not hard at work writing, she spends her time, reading, working out, watching zombie movies, and pretending to write.

Have you read any of Jen’s Wait for You series?
Which is your favorite?

One response to “Feature Tour, Author Top Five, Teasers, Review & Giveaway: Fire in You (Wait for You #6) by J. Lynn”