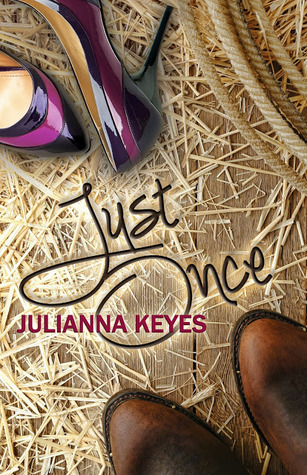 Although her kitchen/cabin staff is lacking and the workload never relents, Kate’s main challenge is Shane Maddox, the ruggedly handsome and doggedly stubborn ranch foreman. Instantly at odds, they battle over everything from ceiling fans to bothersome bats—studiously ignoring the sparks they generate with each confrontation.

They can’t explain their explosive physical chemistry, but after a few frustrated weeks they can’t deny it either. Their solution? Just once. They’ll get past their inconvenient lust and move on.

Kate’s been trying to think with her head instead of her hormones, but is this just another bad decision in a lifetime of careless choices? Has she really changed at all?

Set in the striking and serene hills of southern Colorado, Julianna Keyes’ debut novel offers a sizzling and satisfying tale of unexpected chemistry and the power of second chances. Her characters will get under your skin and into your heart. Just once may not be enough for you either.

I picked Just Once up after reading and falling in love with Julianna’s AMAZING new adult book, Undecided, a few months ago. It sat on my iPad for awhile because other books took precedent, but I was definitely excited when it was picked as the winner of My TBR List poll for November. It wasn’t a total hit, I had some issues with the book, but overall I enjoyed it. Mostly.

If you’d ask me my favorite thing about this book, it’s a toss up between Kate, the friendships and camaraderie between characters, and the setting. I adored Kate. I thought she was a great, strong heroine… except at times where Shane was concerned. I found her easy to relate to. I loved that, despite being a “rich girl” that you would expect to be STAYING at the ranch and not WORKING there, she fit in perfectly. She was hard-working and dedicated. I liked the friendships she formed with other members of the staff. I loved how she grew over the course of this book in pretty much every way. I found her easy to root for.

I really enjoyed the side characters in this story — well, most of them anyhow — and liked seeing them interact in different ways. If Julianna ever decided to write books about Hailey, Lisa, Pete and Brandon, I’d be all over them. In fact, the more I think about it, the more I’m borderline obsessed with the thought of a reunion. But I digress. I’ve been in the mood for more country/western settings lately and Just Once nailed that. A couple weeks ago, a book series made me want to move to Montana. This one made me want to go to Colorado. The world Julianna built around the ranch was easy to visualize and I wished I was there!

I only had one issue with this book, but it was a big one. I didn’t like Shane. Only a couple times did I even consider him partly swoony. I’m all for prickly, but he was a straight up ass for the bulk of the book. I liked the dirty talking, obviously. There absolutely was chemistry between Kate and Shane. The sexy times were super hot. I liked watching as they went from “just once” to “more please” but I never got fully behind Shane. Until the end, anyhow… but by then the damage had been done. He had his issues and I tried to respect those. The back and forth was a bit much for me, to be honest. Plus there was that whole thing that happened with the other woman. If you know me, you know I can’t stand that. It left a bitter taste in my mouth, even as he explained it away later.

In all honesty, this one is closer to 3.5 stars than 4 stars, but I don’t give half stars so I decided to round up. It pained me to think of giving a book only 3 stars when SO MUCH was right about it. Not liking the hero shouldn’t affect the rating that much… right? *sigh* All said, I’m still looking forward to reading even more of Julianna’s back list as I can make time to do it.

Sex with Shane isn’t a game or a story to tell my friends, it’s a need. A basic, elemental craving that won’t go away with time or denial.

“What happened to just once?
“I wasn’t expecting to like it so much.”

Have you read any of Julianna’s books?
Do you have a favorite?

2 responses to “In Review: Just Once by Julianna Keyes”