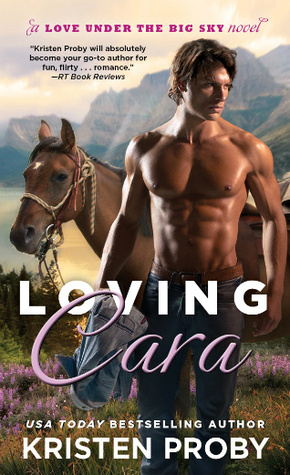 Josh King is an expert at running his family’s multi-million dollar ranch in Montana. (And all that outside manual labor has done wonders for sculpting his six-foot-three body, too.) But as sure footed as he is when it comes to the ranch, Josh doesn’t know anything about how to deal with an adolescent boy—so when his twelve-year-old nephew, Seth, is dropped off on his doorstep, looking scared and acting surly as hell, Josh knows he needs help in straightening him out.

Cara Donovan loves her quiet life as a teacher in her sleepy hometown, so she jumps at the chance to make a little money over the summer as a tutor. But when she learns she’ll be teaching Josh King’s nephew, Cara’s sweet summer job gets a little bit hotter. Cara tries to focus all her attention on tutoring Seth, but Josh proves to be a delicious distraction, while Josh’s memories of the shy girl he once teased in high school are nothing like the beautiful woman he’s facing now. Can he persuade her that there’s more between them than a summer fling?

Can someone please tell me why I haven’t read more of Kristen Proby’s books? Seriously? They’re just so… swoony and sexy and perfect. Loving Cara’s been on my bookshelves for ages. I honestly wasn’t sure it would be for me because Western romance reminds me an awful lot of the books my mom used to read when I was growing up. I’ve been proven wrong. These books ARE for me. Maybe it’s because it’s contemporary Western? Maybe it’s because Kristen wrote it? I have no idea, but I loved it. And I want MORE.

While Loving Cara isn’t really a second chance romance, I loved that the hero and heroine knew each other prior to being put face-to-face in this book. Josh was super swoony and sexy and rugged. He definitely made me want to find a rancher of my own. I just don’t think there are many of them over here on the east coast. Cara was a great heroine. She was smart and kind and easy to like. The chemistry between the two of them was immediate and, of course, slightly messy because she was tutoring his nephew, Seth. Thankfully it never really proved to be a problem. If anything, she actually helped the situation with sullen Seth. This kid’s story broke my heart. It also led to major feels once his father, Zack, was back in the picture.

Loving Cara was a fun, sexy and mostly drama free read. And, because you know I like my romance with some feels attached, I have to say that while there really wasn’t MUCH drama, I did feel like I’d been punched in the feels a time or two. (And I liked it.) It was wonderful to escape into the world Kristen built here. I absolutely adored the characters and plan to devour each book in the series as quickly as possible.

“Because this isn’t a one-night stand for me, Cara. I don’t know where this will go, but it’s not a quick fuck against the wall by your front door.”

“I need to feel alive. I don’t need soft and slow. I need to remember that I’m alive and I need you to fuck me.”

“What I feel for you is so big, Cara. No more doubts.” He tips my chin up to look me in the eye. “You’re with me because there’s nowhere else I want you to be. Got it?”

Do you have a favorite Kristen Proby book?
How about a favorite western romance?

2 responses to “In Review: Loving Cara (Love Under the Big Sky #1) by Kristen Proby”