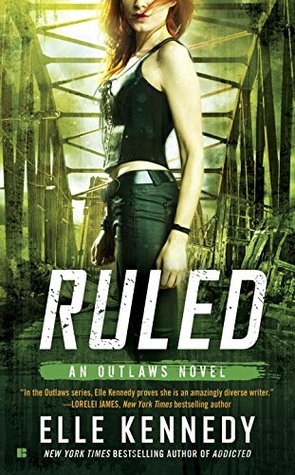 In the latest novel in the series with the “sexiest, baddest, hottest”* outlaws around, one woman must choose between the two men who want to claim her...

Despite his magnetic personality, Rylan can’t seem to seduce Reese, the deadly leader of their town of outlaws. Winning her over is a welcome challenge, but her indifference isn’t the only thing standing in his way. If he wants Reese, Rylan must also win over Sloan, her stoic protector...

Sloan has always loved Reese, but their painful past has stolen his chances of a future with her. Rylan’s interest in Reese only intensifies the tension—until Sloan begins to wonder if the reckless man might be the one person who can bridge the distance...

The last time Reese fell for the wrong man, she had no choice but to kill him. Now, she desperately wants to take what both Rylan and Sloan are offering. But if she makes the wrong call again, she risks losing them both.

I dropped everything to read this book when I got the ARC in the mail way back in August. I’ve not even been able to get it out of my mind since I finished. I’ve tried to think about how to review it and do it justice, but every time I sat down to put my thoughts out in the world, it never seems like enough. The truth is, this book and the entire Outlaws series will forever be among my favorites. Books like these are why I love reading so much. They’re not just words on a page, they’re a total experience.

Ruled FINALLY gives us Reese’s story. It’s the one that has been building the longest and, truth be told, one I was most intrigued by. Despite her position as leader of the group, she was super mysterious. We got bits and pieces of her backstory, as well as of things that happened with her now dead husband, Jake, but I wanted the full story. I got it… and it was surprising in a number of ways. Through the first novels in the Outlaws series, she’s rarely been seen without her right hand man, Sloan, and she’s been the focus of Rylan’s obsession. I couldn’t wait to see how the story with these three unfolded — and I just hoped it wasn’t a triangle. (Spoiler alert: It was not. Holy shit was it ever not.)

Reese, Sloan and Rylan were combustible together. The chemistry between these three was insane. (And the chemistry between any combination of them together was pretty great too — sexually and otherwise.) I’ve read books with threesomes before, but this is the first time I’ve read what I consider to be a menage. I was a little iffy going in because it’s a new concept and one I was unsure I’d be able to believe in, but Elle made a convert of me. I thank her for opening my mind up, as well as for an incredible book. Ruled is, hands down, one of the hottest books I’ve ever read. Jaw-droppingly hot. Text your friend who has read the book with reactionary emoticons hot. Just wow. Sometimes three are better than two… and sometimes things are just as hot when you mix up the pairings a little bit. *fans self*

Along with all the sexy times, there was plenty of action and answers. There were moments when I was literally on the edge of my seat with suspense. There were feels and swoons. I fell in love with each of these three characters and couldn’t wait to see how things would work out for them. Fans of the Outlaws series will be very well pleased with this book. Of course, I loved getting more of my favorite characters from earlier in the series. The characters are so complex and interesting, I just can’t get enough of them.

Despite all the attention I’ve paid to them, let me just say that this book is about so much more than the hot AF sexy times, but I’d be lying if I didn’t say those were an important part of the book. Those sexy times definitely aren’t the only reason I loved Ruled and the rest of the Outlaws series, but they’re a big part. If you’re not open to hot and dirty, these books aren’t for you. But if you’re cool with reading about a society in which sex is one of the last true indulgences and conventional relationships have, for the most part, gone by the wayside, look no further. That, combined with the incredible world that Elle has built, has made this series a favorite. I can’t wait to see what’s next… assuming it’s continuing beyond three books. (Oh please oh please oh please.)

“Open your throat, sweetheart. Man wants to fuck your face. Let’s see what he’s got.”

“The real kicker would be taking you at the same time. Can you imagine how tight you’d feel? How full? There’d be no room in your head for any kind of guilt or worry or concern. There’d only be me and Sloan and every goddamned sensation we could wring from your body.”

“Look, you and I… we’re a lot alike. I don’t think either of us believes in love. We can care about someone. We can owe our loyalty to them, but we can’t give them more than that.”

Are you reading Elle’s Outlaws series?
Are you as addicted as I am?

One response to “In Review: Ruled (Outlaws #3) by Elle Kennedy”