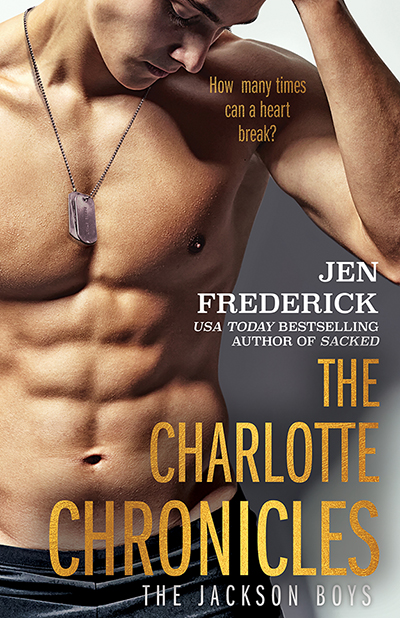 Publication date: December 8, 2014
Publisher: Self-Published
Format: eARC, 356 pages
How I got it: From the author
Add it: Goodreads
Buy it: Amazon
My rating:
Heat level:

Charlotte Randolph was only fifteen when she fell in love with her best friend’s gorgeous older brother—but she wasn’t foolish enough to hope he could ever love her back. Nate Jackson always viewed her as a pesky kid…until the day she got sick. The one bright spot during her illness? He realized she was all grown up. But just when she allows herself to believe that dreams can come true, Nate disappears from her life, taking her heart with him.

Nate knows he lost more than his best friend when he deserted Charlotte to enlist in the Navy. He thought he was doing the right thing, sparing the girl he loves from the shame and humiliation of his actions. Nine years later, it’s time to right his wrongs. He returns home determined to win back his first love…only to find that Charlotte's moved on without him.

But if there's one thing that being a Navy SEAL has taught Nate? Never give up, even when all hope seems lost. And Nate's never going to give up on Charlotte. Ever.

I’ve been a big fan of Jen’s books since I picked up the very first Woodlands novel forever ago. I’m not entirely sure how I missed this book when it first came out, but I’m ashamed of myself. When I recently received an offer to review a copy, I jumped all over it. I didn’t even realize it was a Woodlands spinoff! I’m embarrassed to admit all this, but there you have it.

So now that I got that out of the way… I really enjoyed this book. I mean, Charlotte, Nathan and Nick are the children of some of my favorite characters from the Woodlands series. How could I not love them as much? (Plus, you know, it was damn nice to see Grace and Noah and AnnMarie and Bo as adults and learn that they’re just as in love as they were when I read their respective books. *swoons*) This book grabbed me from the very beginning. I liked Charlotte, I was torn on Nathan and I was all wrapped up in every bit of angst and drama. My heart broke for Charlotte as she fought not only her illness, but her feelings for Nathan and the fact that he might not see her as she saw him. When she realized he did and then she felt like he was holding himself back because of her, I was equal parts proud of and annoyed with her for the decisions she made. The early chapters of the book put me through all the emotions. There were even tears, which isn’t probably all that surprising to you.

My favorite parts of the book, of course, came once Charlotte and Nathan were reunited later in life. But that shouldn’t surprise you either, because y’all know I love my second chance romances. This one certainly put me through the wringer as these two tried to find their way back to each other. A lot had changed since they were kids. The one thing that didn’t was their feelings for each other. I was hit with major doses of feels as the wrongs from the past were righted and all those broken pieces – in Charlotte, Nathan and me – were put back together. It wasn’t an easy road back to each other, but it was worth it all in the end.

I really enjoyed The Charlotte Chronicles. Of course, I found myself totally intrigued by Nick as well. I saw on Goodreads that there’s supposed to be a Lainey’s List as book two in this series and I can’t help but hope it comes with a Lainey/Nick pairing… and after typing that I did another search and realize that Jen’s been posting updates to this story on her website. So I think I’ll run off and read those now. 🙂

Charlotte was meant to be mine. I knew it when she was born. Nick is her brother, but I’m her protector. I’ve let her down this time, but never again.

“Promise me it will always be me,” he says fiercely. “I promise.” How could I not promise? I’ll never want another person to touch me in this way. Never. But a fierce surge of possessiveness washes over me. “And you’ll never have another besides me?” I demand. “Never,” he vows. “It will always be Nathan and Charlotte.”

It’s not that I don’t believe in love. I just don’t believe it’s for me. I had my one great chance at love, but when it was exposed to a few harsh conditions, it collapsed like a shitty ass umbrella in the Windy City.

Can I come from just a touch, a look, a word? Perhaps. If the touch is Nathan’s, if the eyes are his, if the words come from his mouth.

Have you read any of Jen’s books?
Do you have a favorite? (Or multiple favorites?)

3 responses to “In Review: The Charlotte Chronicles (Jackson Boys #1) by Jen Frederick”