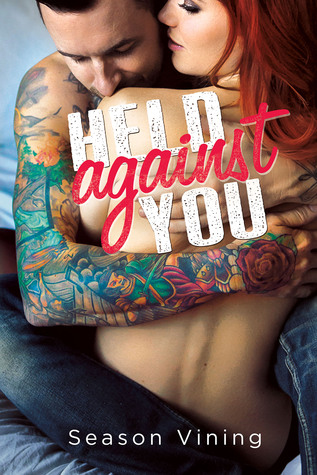 Held Against You by Season Vining
Genres: New Adult, Contemporary, Romance, Suspense
Publication date: January 13, 2015
Publisher: St. Martin's Press
Format: Paperback, 276 pages
How I got it: I bought it!
Add it: Goodreads
Buy it: Amazon | Barnes & Noble | iTunes
My rating:

Accused of a horrible crime and on the run, Kat has been rejected by everyone she loves. She’s a fugitive from her past, flitting from town to town with nothing but the clothes on her back. Until she meets a man who literally stops her in her tracks.

This notorious bounty hunter, with his stunning good looks and powerful instincts, never fails to capture his prey. But there’s something about his newest mark that gets under his skin–and it’s not just the naked innocence he sees in her eyes. Behind his ice cold demeanor, he has his own secrets... and now his lively, vulnerable captive is about to crack him wide open.

As they drive across the country together, neither of them can deny the spark of attraction between them. Will their journey force these two passionate opposites together…or will their dangerous secrets be too much to bear?

Held Against You was the winner of my September “pick a book from my TBR for me to read” poll and I’m really glad it was. It’s been sitting on my shelf since I bought it from BookOutlet sometime last year and I’m happy y’all gave me the kick in the pants I needed to pick it up and read it.

I really enjoyed this book. It was a quick read that was full of romance, suspense and even humor and feels at times. There were enough twists and turns to keep me guessing – and that’s going to make it fairly difficult to review without running the risk of spoilers. I’ll keep my review as vague as possible!

Held Against You brought together two broken in totally different (yet surprisingly similar) ways people, Kat and the mysterious, nameless (for most of the book) bounty hunter that’s been sent to capture her. Kat refers to him as “Steel” for a good portion of the book – after trying out a string of other nicknames – so I’m just gonna go with that in my review. I liked both of the characters, even though I spent the biggest part of the book trying to figure them both out. There was a lot of mystery surrounding each of them. They both had complicated pasts.

One of my favorite things about this book was the way these two characters came together and how they opened up and began to trust each other over the course of the story. It seemed so natural, but it had to have been tough considering the situation each of them was in. They really were kindred spirits and I felt like they were so much stronger together than they would ever be apart.

This was my first Season Vining book. I don’t want to say I was “pleasantly surprised” because that seems like a backhanded compliment, but I’m happy I enjoyed her writing as much as I did. Several friends have pushed me towards her books telling me how well-written and unique her books are and, after this one, I have to agree. I also know that I’m likely going to need more of her books in my life.

“We’re all fucked up. Some of us are just better at pretending.” 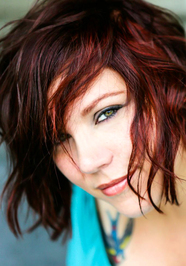 Season Vining is an author, a designer, a philanthropist, a bookworm, a cook, inked, and a night owl. She loves John Hughes films, tattooed boys, and celebrating anniversaries of her 29th birthday. She lives in Louisiana, where she likes to spend time with her corgi, Chap.

Season is a graphic designer by trade and adores all form of art. She's a fan of live music, vintage cars, and people who know the difference between their, there, and they're.

Have you read any of Season’s books?
Would you recommend any of them?

One response to “In Review: Held Against You by Season Vining”