I’m such a fan of Jen Doyle’s books! I’m so glad to be participating in the virtual tour for her latest, Called Up, today. Thanks for stopping by! 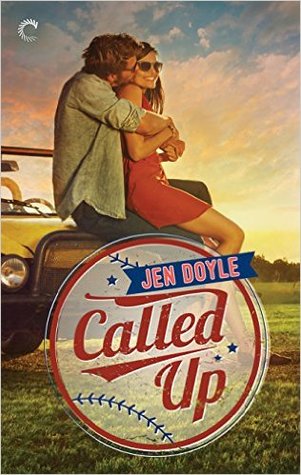 There's one thing Max "Deke" Deacon can always count on besides his old high school teammates: Angelica "Fitz" Hawkins. But no matter how much Deke might secretly fantasize otherwise, a relationship with his best friend's sister is off limits. Until one unexpectedly smoldering encounter has Deke and Fitz giving in to the feelings they've both been fighting for far too long.

Fitz knows for a fact that it is not better to have loved and lost. After losing her parents, she'd rather lock up her heart and throw away the key than endure that kind of pain again. If that means giving up any hope of a lasting relationship, then so be it.

But with Deke, Fitz feels dangerously close to falling in love. She can't risk another broken heart—especially if it means losing one of her best friends for good. Now it's up to Deke to convince her that the safest place she could ever be is right here with him.

“Hey, Dorie,” she heard from above her. “Do you know where Fitz wants these bottles of water?”
Speak of the devil. Fitz brought her head up a little too suddenly, banging it on the underside of the table. “Ouch!” Her hand going to the back of her head, she came up frowning, and…
Oh, God, was he this gorgeous before? Had he always smelled amazing?
Doing everything she could to keep herself immune from his physical charms, she spun on her heel. “Back here.”
Very specifically not looking in Deke’s direction so that she didn’t give anything away, she forced herself to act exactly as she always did around him. Except she suddenly couldn’t quite remember how that was. Did she flirt with him? Did she flat-out ignore him? Did she generally just go around in a state of low-level irritation? Because right now she had absolutely no clue.
She had even less of a clue as she bent down to open up the lid to the cooler and he crouched down next to her, his head so close all he’d need to do was turn it slightly to the left and his mouth would be on her breast.
And was that…?
Oh, hell, no, her nipples had not just hardened. She slapped her arms over her chest.
Because they had. And Deke, with his superhero sex god extra sensory perception, had definitely noticed. He at least had the decency to look down at the ground as he grinned.
“It’s the cold,” Fitz snapped. “From the cooler.”
Pushing the bottles down into the ice, Deke just answered, “You’d be amazed at all the bits and pieces I can warm up with my tongue.”

She has an M.S. in Library and Information Science and, in addition to her work as a librarian, has worked as a conference and events planner as well as a Communications and Enrollment administrator in both preschool and higher education environments (although some might say that there is very little difference between the two; Jen has no comment regarding whether she is one of the "some").

Have you read any of Jen’s books?
Will you be reading this one?

One response to “Virtual Tour, Excerpt & Giveaway: Called Up (Calling It #2) by Jen Doyle”