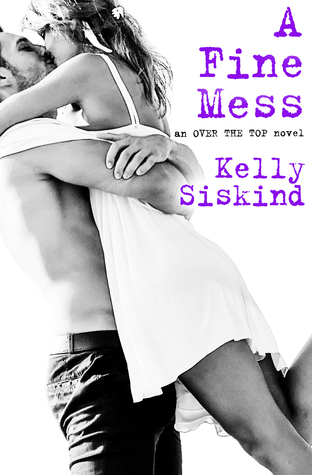 Some guys should come with a warning label...

Sawyer West is Mr. One-Night Stand. He doesn't do relationships or promises or feelings. He's never cared enough to get involved. Until Lily Roberts. She's sweet and shy and sexy as sin, and resisting her is testing his self-control. She believes Sawyer can be a better man, and for the first time in his life, he wants to be. But change isn't easy, and Sawyer would do anything to protect Lily from his past self. Even break his own heart...

I read A Fine Mess immediately after finishing My Perfect Mistake. It made for a great binge. I was totally into the world and the characters, so jumping right into the second book made perfect sense. I’m glad I did, even though the wait for the third book is going to be kinda brutal. Totally worth it… and it’s not like I can’t just reread these first books before going into the third one. Both of them are certainly reread worthy.

I was already half in love with Lily and Sawyer before I even picked this book up. I loved their chemistry when they first met in My Perfect Mistake. I loved how close they became after that. Of course, you had the messiness of Lily already having a boyfriend and Sawyer being, well, a manwhore. (Which you all know is NOT my favorite…) But somehow it worked. The more I learned about him, the more I understood where he was coming from. I could defend his manwhoredness. (Yep, just making words up.) Fortunately, once he and Lily decided to give things between them a try – which took some time because they were both afraid that if things went wrong it would ruin the friendship they’d built – his other ways were left (thankfully) behind. While I don’t like manwhores, I DO love watching the previously commitment phobic guy go ALL IN for one woman once he’s fallen. THAT makes my heart happy.

There was maybe a little more back and forth than I would’ve liked in this book, but it all worked in the end. I might not’ve liked some of the back and forth, but I got it. Their friendship was very important to both of them and this attraction/chemistry/lust threatened it, in a way. I’m not sure either of them would’ve bounced back from it fully. The romance was great. It gave me humor, hot sexy times and feels galore. The characters were far from perfect, but I really liked how their imperfections, pasts and vices were handled and how they helped each other grow into stronger people. I was totally addicted to these characters, the romances and the friendships. I’m more than a little in love with each of the characters in this series and, honestly, with the author for giving me such fresh storylines and amazing, engaging writing.

“I’ve seen what happens when a man hurts a woman. I’ve lived it. And us, this thing we have, it’s strong enough that if I hurt you, I could do some real damage. I’m not sure it’s worth the risk.”

“Looks like your dry spell has ended. I predict a rainy season. Monsoons. Hurricanes. I hope you’re prepared.”

“If I let myself love you, my heart’s not yours to throw away. I won’t go through that again.”

“Thing is, Lil, you’re my sun. You’re the start of everything. Nothing works without you. I lose you, and the rest is chaos.”

A small-town girl at heart, Kelly moved from the city to open a cheese shop with her husband in northern Ontario. When she’s not neck deep in cheese or out hiking, you can find her, notepad in hand, scribbling down one of the many plot bunnies bouncing around in her head. She laughs at her own jokes and has been known to eat her feelings—Gummy bears heal all. She’s also an incurable romantic, devouring romance novels into the wee hours of the morning.

Have you read any of Kelly’s books?
Does this one sound like something you’d enjoy?

Tags: 5 Star Review, A Fine Mess, In Review, Kelly Siskind, Over the Top

2 responses to “In Review: A Fine Mess (Over the Top #2) by Kelly Siskind”