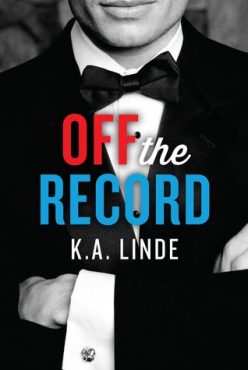 Off the Record by K.A. Linde
Series: Record #1
Genres: New Adult, Contemporary, Romance
Publication date: March 11, 2014
Publisher: Montlake Romance
Format: eBook, 445 pages
How I got it: I bought it!
Add it: Goodreads
Buy it: Amazon
My rating:

Liz Dougherty has no idea a single question is about to change her life.

Her first big reporting assignment for her North Carolina college newspaper has her covering a state senator’s impromptu press conference. Brady Maxwell may have everything it takes to be a politician—a winning pedigree, devastating good looks, a body made to wear suits—but his politics rub Liz the wrong way. When Liz’s hard-hitting question catches the upstart senator off-guard, it impresses Hayden Lane, Liz’s editor who feels she’s headed for a promising career as a reporter.

But Liz is also headed into a secret romance with Brady that could destroy both their ambitions. Though he’s a bachelor, potential voters might frown on Brady cozying up to a reporter. And Liz isn’t sure sneaking around is enough for her—especially when things between her and Hayden might be less platonic than she thought.

Sleek, sexy, and smart, Off the Record ventures into a high-stakes campaign and an even higher-stakes affair to answer the question: When politics and love collide, can there ever be a winner?

Off the Record was the winner of my “pick a book from my TBR for July” poll right here on the blog. (Thanks to everyone who voted!) Of course, if you’ve ever read this book you have to know that there was no way possible I could stop after reading it. I proceeded to very quickly binge the two following books because I HAD TO KNOW ALL THE THINGS. But, I digress. I just wanted to let you know what your pick led to. Today I’m just going to talk about Off the Record though. The following books are other reviews for other days.

I’d read the warnings about how addictive this book/series was and how brutal the cliffhangers could be. I won’t get into all that, but I will say I’m glad I had the next two books queued up and ready to go so I could binge. Believe me when I say I needed to. The cliffhanger at the end of this book was probably the worst in the entire series for me. Addicted only begins to scratch the surface of how I felt about the Record series. But then, it’s a romance set in Washington, DC (at least partially) so you had to know I’d be all over it.

Both Liz and Brady were flawed. If I’m honest, it took me a little bit of time to like them. Well, Brady especially. I found Liz a little easier to connect with. Brady was sexy as hell and, trust me, I got the appeal… but I just didn’t trust him. We all know politicians lie, so I was predisposed to question his motives and actions… and not necessarily believe him when he would defend himself. I probably wasn’t fair to him, but I wasn’t ready to go all in until I made sure he really was a good guy. That alone made me keep turning pages – nearly frantically at times.

What can’t be denied is the chemistry between Liz and Brady from the beginning. Or, you know, the nearly forbidden aspect of the relationship between a statesman and a reporter. You just know that’s going to be juicy if anyone gets their hands on it, especially considering Liz wrote about politics. It’s not like she was doing restaurant reviews here. There was a definite conflict in interest. Either way, their connection was real. The sexual tension was palpable. When it all came to a head, it was hot AF. *wipes brow*

This was a great book, a super quick and SEXY read. (Great pick, y’all! I should let you pick more of my reads.) As high as it was on the hotness scale, it was probably equally as high on the angst scale. Not my usual type of read these days, but damned if I didn’t get into that as much as I did the romance and the politics. K.A. Linde hooked me. It’s that simple. I couldn’t stop reading and I couldn’t stop at just one book. As it is, I’m still looking forward to reading the fourth and fifth books in the series. I’m also really happy they’re not about Liz and Brady because, as much as I wound up loving them, I don’t think my heart could take any more of their angst.

Life after Brady was like watching a film in black and white. It was really quite beautiful, but it felt like something was missing.

“You’re the only person I’ve ever met who so completely disarms me. I feel like sometimes you aren’t looking at me, you’re looking through me. Life you know every secret in my existence… like you know exactly what I’m thinking. That was exactly what I meant that very first day we met, when I told you that you were my airplane. You totally fuck me up, Liz!” 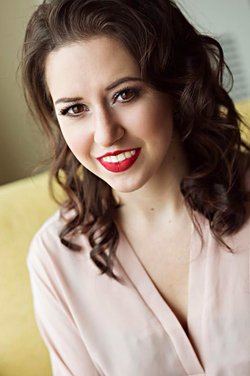 K.A. Linde is the USA Today bestselling author of the Avoiding series and the All That Glitters series as well as seven additional novels. She grew up as a military brat traveling the United States and even landing for a brief stint in Australia. She has a Masters degree in political science from the University of Georgia and is the current head coach of the Duke University dance team.

Have you read this book? Any of K.A. Linde’s books?
Thoughts?