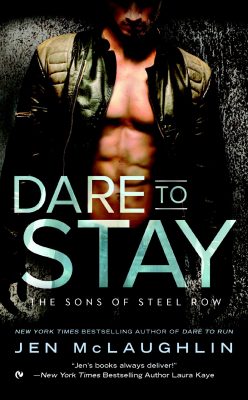 Bruised and bloodied on Boston's mean streets, Chris O'Brien is reeling from the loss of his childhood best friend. But after barely escaping a hit placed on his head, Chris is desperate to live. A safe haven comes to mind - the home of the perfect girl from his childhood, Molly Lachlan. Before he has fully considered what it would mean to involve her in his mess, he finds himself on her doorstep.

When Molly agrees to let Chris inside her home, she realizes she's also letting him into her life. Danger and desperation are coming off him like steam, and yet she can't bring herself to turn him away. His bad boy charm always had a hold on her, but now there's a soulfulness and sorrow in him that she's never seen before. And despite the heart-stopping risk of helping him, she hopes against all reason that he'll stay...

Ok, first off… you should know that if you haven’t read Dare to Run yet, you probably shouldn’t continue reading my review. I don’t think there’s any way to talk about this book without referencing some pretty big spoilers from the first book. If you’ve not read Dare to Run, go run and do that. Then come back here and let me tell you why you will NEED TO read Dare to Stay. (Though I don’t think you’ll need me to convince you.)

When I finished Dare to Run, I remember having a conversation with my friend who’d also read it. Most of that conversation revolved around us wondering if/how Chris would be able to be redeemed after his actions. I held out hope that Jen could pull it out, but I was concerned going in. I’m all for an antihero but I wasn’t sure someone could betray their best friend on the level he did and still win me over when it was all said and done. I was right to trust my initial instincts. Not only did Chris win me over, but I think he even edged out Lucas and became my new favorite in this series. (And one of my favorite of Jen’s guys, period.) I know. I’m shocked, too.

I had so many Chris-related feels I didn’t even know what to do with myself while I was reading this – and afterwards. He’s not a good guy. He’s a gun runner. He’s murdered people. He’s not the guy you’d call swoony and take home to meet your parents. I hate to play the “he’s not to blame for his actions” game, but when it all comes down to it, he’s a product of his environment. He’s done what he’s needed to so he could survive the streets of Boston. My heart absolutely ached for him as he struggled to accept the feelings Molly had for him, to realize he was deserving of love, to understand that he’s worth so much more than he’s always seemed to accept. Even a broken prince can still be a prince. The way he fought for redemption during this book made me realize there’s so much more to him than meets the eye and it’s what won me over the most.

I could go on and on about Chris forever. I loved his character, broken and flawed as he was. But Molly was amazing in her own right. A teacher whose own father was murdered on the same streets that Chris fights, she seems like a very unlikely match for Chris. However, I can’t think of anyone more perfect for him. Not only was she a strong woman with a good heart, she had so much love to give and no one to really give it to. Chris needed that to pull himself out of the darkness. As unlikely as they might’ve seemed, there’s no doubt they had a connection. (And a bit of a backstory, but I won’t get into that… because spoilers.) Their chemistry was electric. The passion and heat jumped off the page. So did the feelings. What was between them was so much more than physical.

Not only does Dare to Stay have great characters, believable romance and HOT AF sexy times, but it had plenty of feels and action. There were times when I was quite literally on the edge of my seat, half afraid to turn the page for fear of what I would read there. Because of Chris’ desire to redeem himself for the situation with Lucas, I was really concerned about how things would wrap up in this book. Would he come out safe on the other side? Was I rooting on a love story that was destined for heartache? Was Molly going to have HER heart broken once again because of the loss of someone she loved? Well, you know I’m not going to tell you all that. What I’m going to say is read the book. Experience it for yourself. You won’t regret it.

I’m addicted to the Sons of Steel Row. I don’t read a lot of darker romances with antiheroes like what I’ve found in this series, but I’m loving this one. I’m ready for Scott’s story in Dare to Lie, even if it won’t be here until February 2017. I’m definitely anxious to see how this series wraps up.

I received a copy of this book from the publisher, via NetGalley, exchange for an honest review.

Sometimes you’ve got to take a look at your life—a good, hard, brutally honest look—and admit that somewhere along the way, you fucked up big-time.

I’d just have to make sure to play it safe. I lived by one rule in my life: Never let anyone in too close. Never care about them enough to let them have power over me. Never love anyone so much that their death would leave a hole in my heart. I already had one of those. I didn’t need two.

My life didn’t need to be all murder, guns, and meaningless sex. It could’ve been more—if I’d been born into another family. Another life. But I hadn’t been.

In his arms, I felt special. Unique. One of a kind. Like a princess. And he was my tarnished prince… Whether he liked it or not.

“You can press those sweet little thighs together all you want, but it won’t change a damn thing—you need me to ease that ache you feel deep inside of you. You need my cock, driving deep into your pussy, until you forget everything and everyone but us.”

Jen McLaughlin is a New York Times and USA Today bestselling author. She writes steamy New Adult books for the young and young at heart. Her first release, Out of Line, came out September 2013. She also writes bestselling Contemporary Romance under the pen name Diane Alberts.Since receiving her first contract offer under the pen name Diane Alberts, she has yet to stop writing. She is represented by Louise Fury at The Bent Agency.

Though she lives in the mountains, she really wishes she was surrounded by a hot, sunny beach with crystal clear water. She lives in Northeast Pennsylvania with her four kids, a husband, a schnauzer mutt, a cat, and a Senegal parrot. In the rare moments when she’s not writing, she can usually be found hunched over one knitting project or another. Her goal is to write so many well-crafted romance books that even a non-romance reader will know her name.

Do you read romances with antiheroes?
Any favorites I should check out?

One response to “In Review: Dare to Stay (The Sons of Steel Row #2) by Jen McLaughlin”