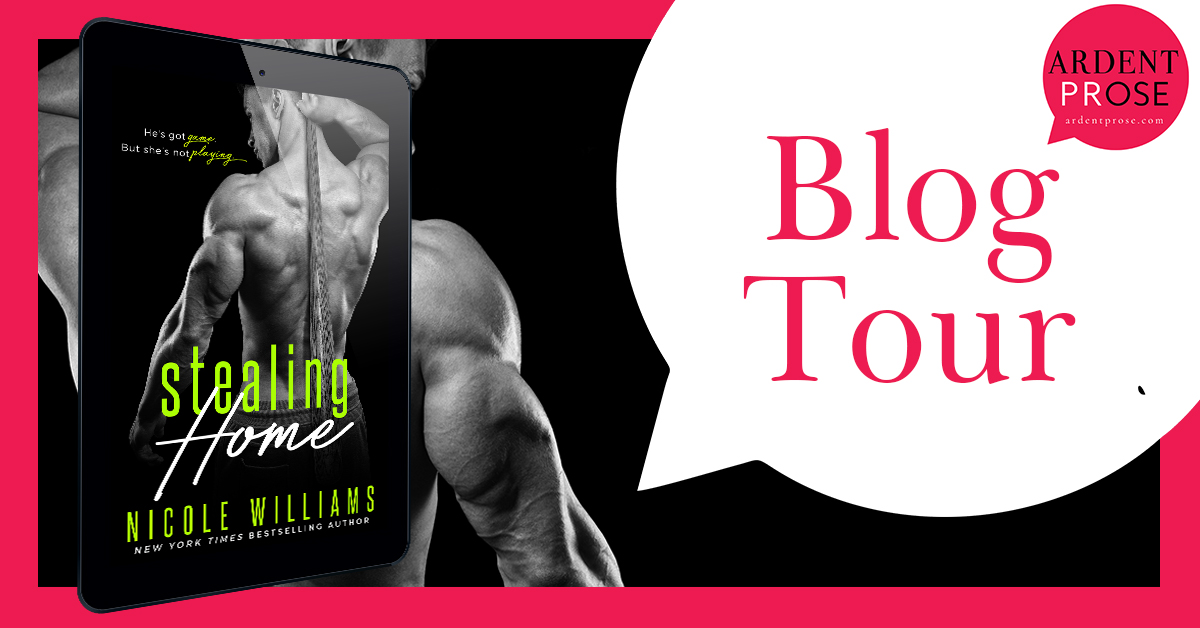 I’m so happy to be participating in the blog tour for Nicole Williams’ latest, Stealing Home. Thanks for stopping by! 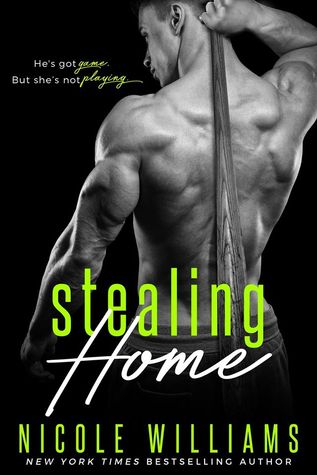 Being the only woman working for a professional baseball team isn’t easy. As the San Diego Shock’s newest athletic trainer, Allie knows all about long hours, endless travel, and warding off players’ advances. Given she’s already the subject of a handful of rumors about how “lucky” she was to have earned such a coveted position, she can’t so much as flutter an eyelash a player’s way if she wants to be taken seriously.

But number eleven is doing more than fluttering eyelashes Allie’s way. Far more. Luke Archer is at the top of his game and doesn’t let the fear of striking out keep him from swinging. This is a motto he applies both on and off the field, but Allie appears immune, seeming to view Luke as nothing more than caution tape on legs.

He’s a player, and in Allie’s experience, they’re all the same. She won’t risk her job or her heart to another one, no matter how different this one claims to be. But as Allie gets to know him, she discovers the number eleven the public thinks they know is very different from the real Luke Archer. He seems too good to be true.

And maybe he is.

Allie will have to confront the stories attached to a player of Luke Archer’s stature and decide who she’ll put her faith in—The man she’s falling for? Or the rumors?

I enjoyed Stealing Home so, so very much. Of course, I’m not surprised because I’ve enjoyed each of Nicole’s books when I’ve read them.

Allie was ridiculously easy for me to identify with. This might be because, once upon a time, I wanted nothing more than to be an athletic trainer. (Oh the things we want to do when we’re young… and where we ultimately end up. Do they ever match up? But I digress.) Allie was living her dream job. Then it just happened to get even dreamier – and more complicated – when Luke, the star of the team she worked for, turned his attentions on her. It might’ve seemed to come out of nowhere – we learn later that’s not really the case – but Luke was relentless in his pursuit. And I loved it. I loved even more learning that you can’t always believe the playboy image thrust upon someone in the spotlight. Luke was SO MUCH MORE than a baseball player and a much better man than what you might believe, if you believe everything you read.

Allie and Luke couldn’t have been more perfectly matched and I couldn’t have loved them more together if I tried. They got each other. They knew the demands of each’s career. They had wicked chemistry and I loved their banter, too. When they were together, sparks basically flew off the page. The sexy times were SUPER hot. *fans self* And, more than all that, they made each other better. It took a little bit of time to dig through Luke’s history – and I was surprised by some of the things I learned – but the book wasn’t too angsty. There were feels for sure, but they were (mostly) of the good variety.

Stealing Home is a perfect summer read. It’s smart and sexy, with characters you just can’t help but root for. It was a super quick read that did leave me wanting more. I don’t know if there are any plans to write books for some of the secondary characters in this book, but I’d be all over them. Luke’s sisters might be a little young now, but maybe fast forward a few years? Any of Luke’s teammates? I’d take it. Whatever “it” is.

“I’m good with my hands, know what to do with a big stick, and am used to getting dirty.”

“I can’t promise you forever. I can’t promise any length of time actually, but I can promise honesty and commitment. The rest, I don’t know. We’ll just have to wait and see.”

One taste. One touch. And he owned me.

“I want to mark you as mine. Everywhere. Anywhere. Every day. Every night. I want part of me on or in some part of you every fucking minute of every fucking day.”

“Shouldn’t you buy me dinner first or something?” Archer smirked at me when he lifted up onto his elbows as I tugged his sweats down his legs.

“Tell you what,” I replied after I gave one last pull, freeing the dark gray sweats from him. After handing him a towel, I waited for him to drape it over his lap. Instead he curled it up and tossed it across the hotel room. “How about I draw you a nice, soothing, relaxing bath? Full of ice.”

As I came around the side of his bed, it took all of my concentration to focus on the compress I needed to unwrap instead of what was resting just a little higher. At least he had underwear on, but it wasn’t like they provided much coverage. Especially when what was tucked inside them looked about ready to burst free.

And dammit. I’d looked. From the way I could feel him watching me, he knew I’d looked too.

“Another ice bath. Sounds perfect. Since my balls aren’t already blue enough.” Archer spread his legs open farther as I reached down to unwind the compress circling his upper right thigh.

“Yeah, well, that’s what you get for not listening to the recommendation of your athletic trainer to take it easy.” I unwound the bandage slowly, not wanting to further inflame the area. “Every three hours, we’ll alternate fifteen minutes of ice and heat.”

“Yay.” He cleared his throat when my fingers brushed his inner thigh as I unwound the last of the compress Shepherd had wrapped back in the locker room after his first ice bath. “Since you got to decide on the ice option, how about I decide on the heat option?”

From the low notes in his voice, I knew exactly what he meant. “The plan is to calm the tear. Not further aggravate it.”

“Ideas that involve what you have in mind and not using your groin muscles?” My gaze wandered back to that part of his anatomy. Right before moving onto a different part of it. Holy shit. Something about knowing he wanted me and wasn’t concerned with hiding that desire made me dizzy. “Good luck with that.”

Archer watched me as I disappeared into the bathroom to turn off the water filling the tub. “Never underestimate the ingenuity of a desperate man.”

After testing the temperature of the bath, I grabbed one more bag of ice and dumped it in. I’d arranged to have four new bags arrive every few hours through the night so I could mitigate the damage Archer’s pulled groin muscle would have on his season.

The team doctor had done an exam in the locker room and assured Coach Beckett that with aggressive care these first twenty-four hours, Archer should be able to play the game in New Orleans three days from now.

From my own exam, I knew the doctor was giving Coach a serious case of lip service. The only way Archer would be able to play the Shock’s next game was if we injected him with every illegal substance in this sport and on the market in general. It was a class two pull—no amount of walking off would fix this in a couple days’ time.

“Are you hungry, Doc?” Archer called from the other room.

“That depends on the context of that question.”

His laugh carried into the bathroom. “You know me too well. However, in this instance, I’m referring to hunger as in for food. The room service type specifically. I can order something for us so we can eat once you’re done cryogenically freezing my gonads.”

Wandering back into his room, I dried off my hands with a towel. “Hey, this isn’t my fault—I warned you to take it easy.”

I ceremoniously waved my arms toward the bathroom, feeling nervous. I’d given so many ice baths I could have filled an entire ocean with them, but this one was different. It was for Luke Archer. In his hotel room instead of the locker room. Plus, back there, the entire coaching and medical staff had been present, pow-wowing a plan of treatment. No one else was here now though.

Just me. Just him. And a locked door.

“Dinner?” Archer waved the room service menu at me.

“I’ll order it for us. We need to get you in the tub before you get any more swollen.”

Archer’s gaze swept down his body, landing on the very part of him I was trying not to inspect. “I can think of something to help with the ‘swelling.’”

Crossing my arms, I gave him an unfazed look. “I’m here to see to your leg. Not your dick.”

“True. Ice baths are up to the task of tending to torn muscles and swollen dicks. So let’s get started.”

Archer lay stretched out in bed for another minute, calling my bluff, but when I made no move to throw myself at him, he sighed. “The ice bath it is.”

Will you be reading Stealing Home?