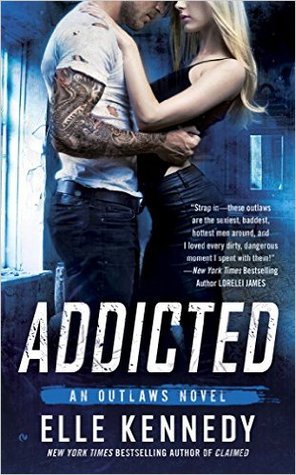 Lennox used to live in a paradise on earth with his best friend Jamie, in a place where visitors came and went, allowing their desires to run free. But everything changes when a deadly attack forces them to take up with Connor Mackenzie’s band of Outlaws. Lennox knows Jamie is hung up on someone else, but he’s always believed he’s the man for her—and won’t let her go without a fight.

Even though Jamie is well aware that Lennox is one hot specimen of a man, she refuses to let sex ruin the most important relationship in her life. But when the object of her interest spurns her, she indulges in a little pleasure-filled revenge with her very magnetic, very willing best friend. One thrilling night with Lennox is enough to awaken Jamie’s unexpected desires for him. And now that she’s had a taste, she’s not sure she can ever give him up...

You guys. Let’s be real here for a minute… I have absolutely no idea how to review this book and do it justice. I read it two months ago and thumbed through it again more recently looking for quotes and every time I sit down to write my review, pretty much all that comes out is incoherent babble. So, I’m just gonna go with it. I don’t want to spoil any of the MAJOR HAPPENINGS for you anyhow. And believe me, there are plenty of them.

It’s quite possible I loved this book even more than the first in the series. (Which, you know, is saying a whole lot because I had huge, major love for Claimed.) Addicted fit in so nicely with the storyline already established in that book, but this time it was a friends to lovers book and those are, like, my book crack. I can’t get enough of them. It was wildly sexy, HOT AF and kept me, quite frankly, totally addicted from the first page. Lennox and Jamie’s story was so good and it pushed all of my buttons – in a good way. From the “we want each other, but we can’t cross that line because we’ll lose each other” in the beginning to the “we can’t hold back anymore and what does this mean for our friendship” in the middle and the eventual understanding that they could never go back and nor would they want to, I was in it with them. I wanted to see them find a way to make it work in this seriously messed up world in which they live.

I expected this book to be sexy. No, strike that. I expected this book to be HOT AF because the first one was that and then some. This series “goes there.” In a society where orgasms are a form of trade, power and, honestly, one of the only rewards, there are no lines. You can expect threesomes, M/M, F/F and more. It will leave you fanning yourself, but you’ve got to be open-minded enough to read it first. What I didn’t expect from this book, but got in spades was FEELS. Freaking feels. Feels for days. I cried. Like, legit sobbed. And it was so so so good – even if I was left a little devastated by some of the turn of events. (But I won’t say any more about that. Just read it.)

Long story short: Elle did it again. She continues to blow my mind with this Outlaws series. I might be terrified to see what happens next in this series, because it is a dystopian after all, but I am waiting with grabby hands for Ruled. (I *need* Reese’s story.) All I can do is hope that the majority of the characters I have really come to love will make it out in one piece when this series is over. I think I’ll stock up on wine and ice cream just in case though.

She was really the only thing that mattered, if he was being honest. He could be living in a volcano inhaling ash and bathing in hot lava, and he’d be perfectly content with it as long as Jamie was by his side.

She was one of the rare people who got to experience the gentle Lennox. The sweet Lennox. She would’ve missed out on that if the two of them had gotten sexually involved, because going to bed with Lennox would’ve come with a choice: sex or friendship. Times like these, when he ran a tender hand over her cheek and gazed at her as though she meant the world to him, she was glad she’d never been forced to make that choice.

Orgasms were one of the few rewards in this dangerous, fucked-up world. Made living in it a bit more tolerable.

“That’s what men do. They yell and grumble and pound their fists against their chests and do whatever they can to protect their women. And we protect them. Trust me, they know that. They know they need us, even if they don’t always say it.”

Have you read any of Elle’s Outlaws books?
Do you think you might?

3 responses to “In Review: Addicted (Outlaws #2) by Elle Kennedy”