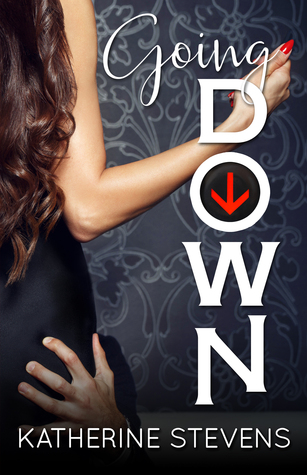 Going Down by Katherine Stevens
Series: Elevator #1
Genres: Adult, Contemporary, Romance
Publication date: June 20, 2016
Publisher: Self-Published
Format: eARC, 200 pages
How I got it: From the author
Add it: Goodreads
Buy it: Amazon
My rating:

The plan for Cici Carrington was to steadily climb UP the corporate ladder, and hopefully do so without her skirt tucked into the back of her underpants. Unfortunately, there was no contingency plan for the aftermath of spending a night trapped in an elevator with a suit-wearing Elevator Sex God named Cole Danvers. A one…or two-time dalliance wouldn’t normally throw off the course of someone’s life…unless you find out you have to work together the next day.

To further complicate matters, Cici’s best friend is also her Human Resources Director. She has to hide her secret from every person she knows. Her only confidant is her one-eyed cat, and his loyalty is tenuous at best. Toss in an accidental mugging, a bungled disguise, secret meetings, and unintentional arson, and Cici’s beautiful, careful plan has fallen by the wayside.

Perhaps there aren’t any hard and fast rules in life. Sometimes you can have your cake and eat it too. Sometimes following the rules doesn’t get you ahead.

And perhaps sometimes you can get off between floors…

Are you looking for a romance that will make you laugh out loud and swoon? Look no further. Going Down is the book you want. I enjoyed this debut novel as much as have books from other funny ladies like Alice Clayton and Penny Reid in the past.

I went into this book thinking it would be just another romance (and, you know, I’m ok with that because kissing and sexy times) but I could tell right away it wasn’t going to be. The romance is great, don’t get me wrong. I really liked Cici and Cole, so following along with them as they explored this thing between them and got it on all over the office (and then some) was great. But what really made the book stand out for me was how funny it was. From the descriptions of Cici’s cat Leroy and his coke nail (LMAO) to the very colorful descriptors for Cole’s, ahem, manhood, I found myself literally laughing out loud as I read.

I love a good office romance and Going Down definitely gave me that. From their first moments stuck in an elevator, before they even knew who the other was, Cici and Cole had amazing chemistry. Of course things had the potential to get just a bit (or a whole hell of a lot) messy once their true identities were revealed – you know, her being his boss and all that. It didn’t even matter to me. All of that other stuff was secondary to the chemistry, passion and banter between these two characters. I just knew they’d find a way to make it work and I was happy to read along as they figured it all out.

Not only was this a wonderful, funny and swoony debut novel, but it was a great start to a new series I’m looking forward to following. If Katherine’s sophomore novel is half as good as this one, she’ll have a fan for life right here.

“Also,” I began, “in the interest of full disclosure, it’s been awhile since I’ve had the sex, and I’m a little afraid some tumbleweed or a barn owl could come popping out of there.”

His manhood stood at attention directly in front of my face. I mentally saluted it. Before today, I would’ve said if you’ve seen one penis you’ve seen them all. Sure, size, shape and color vary, but they pretty much all look like newborn, hairless weasels. This one was different. This one should’ve made a sound each time it was unsheathed. But that would make for some awkward conversations at the urinal, I suppose. It was what I thought penises would look like before I saw a real one. I don’t think trumpet fanfare would have been out of order.

When Katherine Stevens isn’t writing, she can usually be found opening juice boxes and looking for lost shoes. Her kids keep her quite busy and always zig-zagging across the line of sanity. She is a lifelong Texan with a terrible sense of direction and even worse memory. She thinks life is entirely too hard if you don't laugh your way through it.

As a child, she dreamed of being the most sarcastic astronaut in history, but her poor math skills and aversion to dehydrated food kept her out of the space program. Now she writes to pass the time until NASA lowers their standards. Your move, NASA.

Do you like a little (or a lot) of humor with your romance?

4 responses to “In Review: Going Down (Elevator #1) by Katherine Stevens”