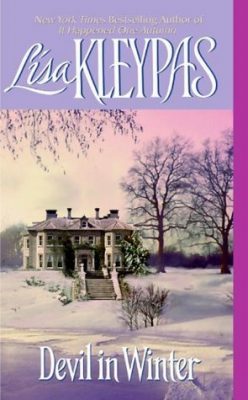 Devil in Winter by Lisa Kleypas
Series: The Wallflowers #3
Genres: Historical Romance
Publication date: November 30, 2010
Publisher: Brilliance Audio
Format: Audiobook, Length: 10 hours and 6 minutes
Narrator: Rosalyn Landor
How I got it: I bought it!
Add it: Goodreads
Buy it: Amazon
My rating:

Easily the shyest Wallflower, Evangeline Jenner stands to become the wealthiest, once her inheritance comes due. Because she must first escape the clutches of her unscrupulous relatives, Evie has approached the rake Viscount St. Vincent with a most outrageous proposition: marriage!

Sebastian’s reputation is so dangerous that 30 seconds alone with him will ruin any maiden’s good name. Still, this bewitching chit appeared, unchaperoned, on his doorstep to offer her hand. Certainly an aristocrat with a fine eye for beauty could do far worse.

But Evie’s proposal comes with a condition: no lovemaking after their wedding night. She will never become just another of the dashing libertine’s callously discarded broken hearts —
which means Sebastian will simply have to work harder at his seductions…or perhaps surrender his own heart for the very first time in the name of true love.

Hey there! This review is for a book I read as part of the Re-Read Challenge and it’ll definitely look different than many of the reviews you’ve read here previously. 🙂

It’s not been all that long since I read this book the first time, so I think I remembered nearly everything about it. It’s from a series I love, by an author who is among the best of the best in her genre and features some of my favorite characters of all time.

I always knew I would reread this at some point, but with the recent announcement that Sebastian and Evie’s son would be starring in an upcoming book, I couldn’t get the characters out of my mind. I knew that meant it was time for a reread… and making myself ONLY allowed to listen to it at the gym also provided some extra motivation to get my butt moving. But when it all comes down to it, I reread this because I loved it so much the first time. It’s pretty much the perfect HR book and it was the most surprising in the series for me, because I was so anti-Sebastian after It Happened One Autumn.

Not that I was in danger of forgetting, but I was reminded why I loved Sebastian and Evie as much as I did. This book was so sweet and sexy. It also had some really funny and heartwarming parts. I had to fight back tears on the elliptical at least a couple times. I also realized I wouldn’t be happy until I reread the other books in the series sometime soon. I’ve not read A LOT of HR, but The Wallflowers is the best of the best in my opinion. In fact, I might’ve loved this book even more the second time around!

Yes. Yes. Yes. As soon as I finished it, pretty much wanted to start the entire series over again and, yes, even listen to this one a second time. I have a feeling I’ll be rereading this book – as well as Lisa’s other books – for years to come.

“If your concern is that I may be overcome with manly ardor and ravish you in a moment of weakness… I may. If you ask nicely.”

“It’s impossible,” he snapped.
“Why?”
“Because I’m Sebastian, Lord St. Vincent. I can’t be celibate. Everyone knows that.”

“A man’s vanity is more fragile that you might think. It’s easy for us to mistake shyness for coldness, and silence for indifference.”

Mysteries of attraction could not always be explained through logic. Sometimes the fractures in two separate souls became the very hinges that held them together.

“I want to fill every part of you, breathe the air from your lungs and leave my handprints on your soul. I want to give you more pleasure than you can bear.”

Lisa Kleypas graduated from Wellesley College with a political science degree. She is a RITA award winning author of both historical romance and contemporary women's fiction. Her novels are published in fourteen different languages and are bestsellers all over the world. She lives in Washington State with her husband Gregory and their two children.

What are some of your favorite historical romances?

4 responses to “Re-read Review: Devil in Winter (The Wallflowers #3) by Lisa Kleypas”