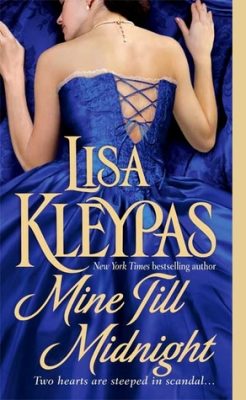 Mine Till Midnight by Lisa Kleypas
Series: The Hathaways #1
Genres: Historical Romance
Publication date: October 2, 2007
Publisher: St. Martin's Paperbacks
Format: Paperback, 376 pages
How I got it: I bought it!
Add it: Goodreads
Buy it: Amazon | Barnes & Noble | iTunes
My rating:

When an unexpected inheritance elevates her family to the ranks of the aristocracy, Amelia Hathaway discovers that tending to her younger sisters and wayward brother was easy compared to navigating the intricacies of the ton. Even more challenging: the attraction she feels for the tall, dark, and dangerously handsome Cam Rohan.

Wealthy beyond most men’s dreams, Cam has tired of society’s petty restrictions and longs to return to his “uncivilized” Gypsy roots. When the delectable Amelia appeals to him for help, he intends to offer only friendship—but intentions are no match for the desire that blindsides them both. But can a man who spurns tradition be tempted into that most time-honored arrangement: marriage? Life in London society is about to get a whole lot hotter...

After doing a reread of my favorite Lisa Kleypas book, Devil in Winter, last month, I decided it was high time to read another historical romance. Since she’s my favorite HR author, I decided to grab the first book in one of her series that I’ve not yet read from my shelves. The cover for Mine Till Midnight pulled me in and when I realized it was Cam’s book, I knew I HAD TO read it. I only wish I’d read it sooner. Truthfully, if I’d realized it was Cam’s story, I probably wouldn’t have waited this long. I was totally intrigued by him in The Wallflowers series, so I was obviously over the moon to get more of him here. And boy, did I ever.

Amelia and Cam were the best. I absolutely adored them. I enjoyed watching her try to resist him as he pursued her relentlessly. Amelia was strong and smart and, at 26, a spinster. Cam, as you know if you’ve read Devil in Winter, was half Roma Gypsy/half Irish and all delicious man. He was romantic and passionate. I loved him every bit as much as I suspected I might when I started. He was such an interesting character – torn between his Gypsy and Irish roots and, now, also wanting this woman who has entered his life. Amelia was no slouch either. Her first priority was her family and she showed it in nearly every action. She and Cam had oodles of chemistry, wonderful banter and tons of passion. I couldn’t get enough of them.

The other thing(s) I couldn’t get enough of? The other members of the Hathaway family and the dynamic between them. They’re all such richly imagined characters that they just jumped off the page. The lot of them might’ve been the secondary characters in this book, but they never truly faded into the background. I’m happy about that, too. They each have such interesting personalities and quirks and I can’t wait until I get happily ever afters for every single one of them. (As of the time I wrote this review, I’ve binged on the first three books in the series and I’m absolutely itching to continue on, but … work.)

Mine Till Midnight was a glorious start to a new historical romance series I know is going to wind up as one of my favorites. I’ve not read what I’d consider to be a lot of historical romance, but I have read a fair few. This is the first where the hero was part Gypsy and I’ve really liked learning more about that culture. I’ve been truly fascinated by the differences between their culture and the typical characters in HR. This book was funny, sexy and romantic. I even got smacked in the feels a couple times along the way. And the cameos from some of my Wallflowers series favorites? Absolute perfection. I couldn’t have been happier with this book. I also couldn’t be more addicted to this family.

“I believe in magic and mystery, and dreams that reveal the future. And I believe some things are written in the stars … or even in the palm of your hand.”

The fact was, Amelia was his, whether he stayed or left, whether they walked the same path or not. They could live on opposite sides of the world, and she would still be his.

“You’re not like any man I’ve ever known. You’re not even someone I could’ve dreamed. You’re like someone from a fairy story written in a language I don’t even know.”

Lisa Kleypas graduated from Wellesley College with a political science degree. She is a RITA award winning author of both historical romance and contemporary women's fiction. Her novels are published in fourteen different languages and are bestsellers all over the world. She lives in Washington State with her husband Gregory and their two children.

What are some of your favorite historical romances?

Tags: 5 Star Review, In Review, Lisa Kleypas, Mine Till Midnight, The Hathaways

4 responses to “In Review: Mine Till Midnight (The Hathaways #1) by Lisa Kleypas”