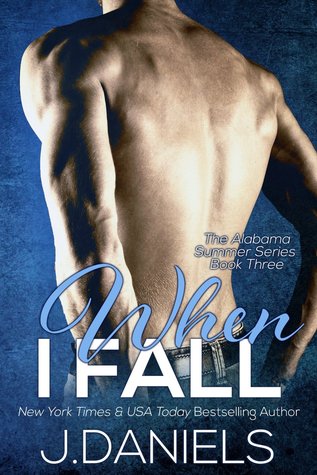 When I Fall by J. Daniels
Series: Alabama Summer #3
Genres: Adult, Contemporary, Romance
Publication date: March 17, 2015
Publisher: Self-Published
Format: eBook, 321 pages
How I got it: I bought it!
Add it: Goodreads
Buy it: Amazon | Barnes & Noble | iTunes
My rating:

For the past nine years, I’ve kept my heart as far away from my dick as possible.

Those two can’t be anywhere near each other. They don’t play nice, and one of them undoubtedly winds up getting hurt.

Not my dick. My dick is good.

The women I take home know exactly what they’re getting from me—sex. Nothing more. At least, that’s what’s supposed to happen. The sweet brunette from Kentucky I set my sights on tonight shouldn’t have been any different. I had her right where I wanted her. Where I needed her. But when my past comes walking into McGill’s pub, the woman in my arms decides to take things to a whole new level, putting me into a situation I never saw coming.

My heart is about to get fucked. My dick can sit this one out.

I’m pretty sure I’ve said this when reviewing each book in the Alabama Summer series, but I’m gonna say it again here… I’m enjoying this series so freaking much. The setting, the characters, the stories, the swoons, the hot AF sexy times? It’s all so good. (Which should be pretty apparent considering I read the first three books in a little under two days. #noregrets.)

Reed has been lurking in the background of the series so far and I was so excited to learn he was getting his own book. He was pretty much my favorite type of guy in books – the one where no one else exists for him once he falls for the heroine. Reed was a no strings attached, good time only guy at the beginning of the book. (The kind of guy I do not like quite as much.) I mean, he has his reasons as I learned later, but still. I do love watching that kind of guy get knocked on his ass though, and that’s exactly what Beth does when she gets to town. (Yay!) What begins as an “I have to have her” thing turns into a “I can’t be without her” thing and it was perfectly imperfect.

Beth’s had a rough past. My heart hurt for her. Naturally I wanted only good things for her when she got to Alabama, where she moved in with her aunt and uncle. She was a strong woman, a survivor and she deserved good things. I wasn’t sure Reed would be able to give her those good things, but as the story all played out, I’m convinced no one else could’ve done it better. From their first night in the bar to the way she insisted he allow her to pretend to be his girlfriend during his (evil) ex’s engagement party and even further into the story, I loved these two. I loved how she pushed him and how he did the same for her. Of course, there were a couple times where I wanted to shake sense into both of them, but that’s just part of the angst, right? I had a tough time putting this book down once I started reading it. I couldn’t get enough of Reed or Beth or what was playing out between them.

Where I Fall was super hot. Reed had an incredibly dirty mouth and, well, y’all know how I like that. It also had some scenes that had me swooning all over the place and even a few that had me literally laughing out loud. You’ll know them when you get to them. Mia, Ben, Tessa and Luke all play a part in this book, too, and it was wonderful to see what they’ve been up to since I finished their book. Life’s progressing nicely for each of them and that just makes my heart happy. Such a great series. I’m really looking forward to CJ and Riley’s book in What I Need. Come on, June. Get here.

This is just sex, and the only thing this chick needs to know is how I fuck, not why I fuck the way I do. I’m not getting personal. My dick is. End of discussion.

“Just because there’s a bunch of filthy sex in it, doesn’t make it any less sweet. Stories should feel real. Wanting something wild and romantic at the same time feels real to me. I think relationships need both.”

“If you think kissing is the best part of being with a man, then you’ve been with the wrong ones.”
“I think kissing is a very important part of it. It connects you to the other person in a way that sex can’t, in my opinion. And I’m honestly not sure how you can sleep with someone and not want to kiss them. Isn’t that one of the things that draws you to the other person? Wanting to see how they kiss?”

“Love should be unpredictable. I want it to hit me and like, knock me on my ass. And I don’t want it to take me years to realize that’s what I was feeling.”

Being a lover of books has its perks. There’s always a story waiting to be read. A hero to fall in love with. A heroine to adore. Sometimes I think I should change genres and actually give the potential men in my life a chance. My expectations of love are dangerously unrealistic.