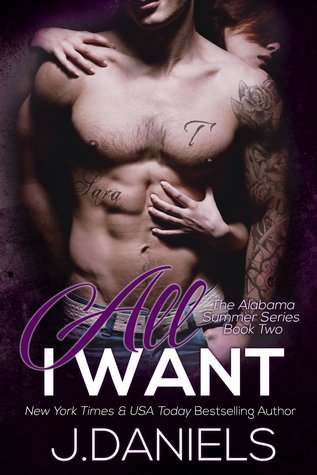 Luke Evans is a heartbreaker.
I didn’t want to give mine to him. Not when he kept me out.
He gave me enough, just enough to make me fall in love with him. I say this to convince myself. But I know the truth.
I would’ve fallen in love with him at a distance.
Handing my heart over to Luke was the easiest thing I’ve ever done. I was naive when I wished for more, when I hoped he wanted the same things I did.
I try to hate him. I try to forget him.
But it’s not that easy.
Love is a ruthless bitch, and I’m her latest victim.

Tessa Kelly is a man-eater.
When she sets her sights on you, she doesn’t just consume your heart, she goes for your soul.
What we had was perfect, real, and all I would ever want.
But she destroyed it.
She destroyed us.
I try to hate her. I try to forget her.
But it’s not that easy.
Love is for people who have hope, and I have none.

Warning: this book contains adult themes. 18+. All I Want is a standalone novel, but to fully appreciate the f****ed-up mess that is Luke & Tessa, pick up Where I Belong first.

I have to admit I was super nervous about reading this book. I have this “thing” about manwhores in book. The “thing” being that I don’t like them very much. Since it was obvious at the end of Where I Belong that Luke was going down that path in an effort to make Tessa jealous, I was a little put off before I even started the book. I’m glad I didn’t let that stop me though, because while this was a REALLY tough and emotional read at times, it’s my favorite of the series.

Luke and Tessa. Good lord. These two. They just go to show that friends with benefits won’t always stay that way for long. After their brutal split in Where I Belong, they allegedly hated each other. Except it’s ridiculously obvious they didn’t hate each other at all. They pushed each other’s buttons. They tried to make each other jealous. But, at the end of it all, they loved each other and were hurt over the split and the events that led up to it. I simultaneously loved them and wanted to shake some sense into them.

All I Want was basically made of feels. It was angsty and messy and made me feel all the emotions. It was downright painful to read at times. It left a mark. I know these are two characters I won’t forget for a long time to come. Don’t worry though, it wasn’t ALL emotional; there were plenty of funny and sexy moments along the way. It was easy to get completely wrapped up in Luke and Tessa and the mess they created for themselves. Silly, stubborn characters! *shakes fist* We also got to see some great scenes with Mia, Ben and Nolan, so that helped lighten things up a bit, too. (Plus, you know, I loved seeing them again.)

I’m really enjoying J. Daniels’ Alabama Summer series! I still have one review to write so I won’t get ahead of myself, but I will say I binged the first three books in the matter of a day and a half. I’m sorry I waited so long to take this series off the shelf (so to speak, since it’s on my eReader) but I’m glad I did it now. I have a “thing” for sexy and swoony southern boys and strong and sassy southern women. “Thing” is a good one in this instance, though. I love them. 😉 This series ticks all the boxes for me and I can already say I’m eagerly anticipating the fourth book in the series, What I Need. Thankfully it’ll be released next month, so the wait is pretty bearable.

Love is great when you’re with someone. It’s better when it’s reciprocated. But it fucking sucks when that shit is one-sided.

You can hate someone until you’re blue in the face, but that doesn’t take away the desire that brews in your gut at the mere sight of him or her.

It’s possible to hate someone, to look at them and wish you weren’t aware of their every move, and to want them more than you’ve ever wanted anything in your life.

Time didn’t soften his voice in my head. The pain I feel at the very thought of him doesn’t prevent memories from resurfacing. The hate I have for him doesn’t touch the part of me that loved him. And I’m afraid it never will.

Because when you fall in love with someone exactly the way they are, how do you convince yourself they aren’t enough for you?

“I love you. Those words are yours. I’ll never say them to anyone else.”