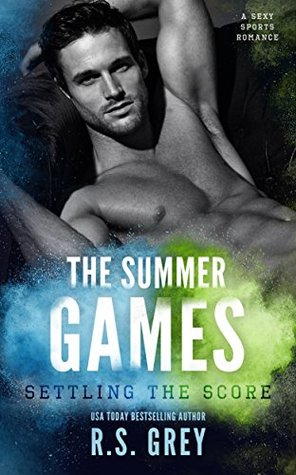 Settling the Score by R.S. Grey
Series: The Summer Games #1
Genres: New Adult, Contemporary, Romance
Publication date: May 3, 2016
Publisher: Self-Published
Format: eBook, How I got it: I bought it!
Add it: Goodreads
Buy it: Amazon | Barnes & Noble
My rating:

As an Olympic rookie, Andie Foster has spent far more time in her cleats than between the sheets. For 21 years, her Friday nights have consisted of blocking shots rather than taking them. But now that she's landed in Rio, she's ready to see for herself if the rumors about the Olympic Village are true:

• The athletes are all sex-crazed maniacs...
• The committee passes out condoms like candy...
• The games continue long after the medals have been handed out...

As Andie walks the line between rumor and reality, she's forced into the path of Frederick Archibald, a decorated Olympic swimmer and owner of a sexy British accent—too bad he's unavailable in a way that "it's complicated" doesn't even begin to explain.

In other words: off limits.

It doesn't matter that he has abs that could bring peace to the Middle East and a smile that makes even the Queen blush; Andie fully intends on keeping her focus on the soccer field. But the Village is small. Suffocating. Everywhere Andie goes, Freddie happens to be there—shirtless, wet from the pool, and determined to show her a whole new meaning of the phrase "international affairs".

Lately I’ve been in the mood for books that are funny, sexy and sweet and that WON’T make me cry. Tear up is fine. I like feels. I just haven’t been in the mood for the onslaught of emotions tougher reads can bring. When I saw R.S. Grey had a new book coming out, I knew I needed to buy it. When I read the synopsis and realized it was a book set during the Olympics AND it was a spinoff of Scoring Wilder (WHICH I LOVED), I bought it and bumped it to the top of my list. I couldn’t get enough of it one I started. I mean seriously. I spent my lunch and gym time reading this one. This book was straight up addictive.

I adored Andie from the very start. I loved her attitude, determination and general spunkiness. Her friendship with Kinsley and Becca (from Scoring Wilder) was fantastic. Not only were they genuine and supportive, they were hilarious with each other. The banter was LOL-worthy. (And I did LOL. Literally. Lots.) Freddie was wonderful, too. So sweet and sexy. He was a great guy that was under a lot of pressure and in a bad situation thanks to his family. Of course, it goes from bad to worse over the course of this book, but I’m not going to get into all that. What’s important here is the connection between Andie and Freddie and it was undeniable. I loved their chemistry and banter and everything else. It was easy to cheer them on – on and off the field (or in the pool, for that matter). Even the drama felt like it was realistic, given the situation and the players involved. It was a fun book to read and pretty much exactly what I needed right now. It wasn’t without a few feels, but they weren’t overwhelming.

I just can’t recommend this book highly enough. I thoroughly enjoyed the world that was built around the Olympics in Settling the Score. In fact, I already have grabby hands over the second book and August just can’t get here soon enough for me. Gymnastics and forbidden romance? Yes, please. I’m ready for Out of Bounds.

“Damn,” Nina whispered, clawing her fingers into my arm so she could push herself up for a better view. Damn didn’t begin to cover it. Damn was a word for ugly peasants. This Freddie? The sight of him begged a rousing “good heavens” with a polite undertone of “new pair of panties, please”. His face was so handsome I blinked three times before letting myself believe I was looking at a real live human.

“I forget,” Becca said, turning around to look at the three of us in the backseat. “Is it ‘The British are coming’ or ‘The British are making me come’?”
Kinsley laughed. “We never should have declared independence. Do you think we can take it back?”

Then, like a dirty little habit, I started thinking about Freddie again. I closed my eyes, imagined what it would have been like if I’d slipped my hand past his belt and tried to affect him as much as he’d affected me, and yes, I couldn’t help it; I touched myself at 8: 02 AM. Obviously, I’m a terrible person. I’d had two orgasms and no breakfast and I was showering again and hating Freddie for making me crazy.

I hated his beauty. I hated the way his attention made my heart race and my palms sweat. I could tell myself to look away, but deep down, I knew that until he was done with me, I’d never be done with him.

Have you read any of R.S. Grey’s novels?
What are your favorites?
Do you plan to read this one?

7 responses to “In Review: Settling the Score (The Summer Games #1) by R.S. Grey”