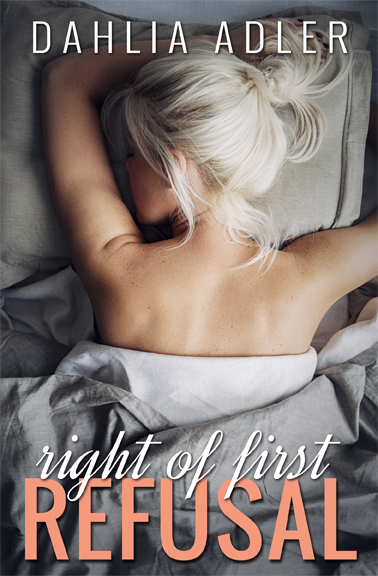 On the lacrosse field, Cait Johannssen gets what she wants. Off the field is another story. Because what she wants is the school's hot new basketball student-coach, Lawrence Mason, who also happens to be the guy who broke her heart in sports camp two years earlier.

But it's Cait's new roommate who's got him.

Cait and Mase agree it's best to keep their past a secret, but she doesn't expect him to completely ignore their history...or how much it'll hurt when he does. So when a friend on the basketball team asks her to pose as his girlfriend for a night, Cait can't turn down the opportunity for distraction. (Okay, and a little spite.) But what starts as an evening of fun turns into a fake relationship with more lies than the usually drama-free Cait can handle, and it's only keeping her from the one truth that's nagged at her for years: Why did Mase cut her out of his life to begin with?

And is it really too late to get him back?

Dahlia Adler has done it again. Right of First Refusal is everything that is right about new adult in one addictive little package. I’ve pretty much been waiting for this book since I finished Last Will and Testament AGES ago, before I really even knew who or what it would be about because I just honestly loved Dahlia’s writing and take on the genre so much. The wait was long, but totally worth it.

I was a little worried about the whole love triangle thing when I first started Right of First Refusal. Unlike some readers, I’m not adamantly against love triangles… as long as they’re realistic and well-written. I mean, it happens in real life. Why should books be any different? But I digress. This was a good love triangle, if you even want to call it that. It’s messy, sure. I mean, how awful would it be to be in Cait’s shoes and realize your new roommate’s boyfriend is a guy you not only have a past with, but “the one”? I felt for her. Seriously. There was no way this was going to end in a way that didn’t hurt someone. And truthfully, I didn’t even know exactly what I wanted to happen. It’s easy to root for the main character to get her way, but sooner or later you start thinking about what it’s like to be the other character, too. But, I’m not gonna go any further down that road right now. You can do it when you read this book. Which you should.

I liked Cait. I really liked Mase. The secondary characters were wonderful and I love the friendships. I LOVED the diversity and the fact that it’s not totally in your face. It just … is. It didn’t need to be more than what it was. It was perfect as is. More than anything, I loved that it wasn’t a point of conflict in the novel. It’s 2016. An interracial relationship shouldn’t be looked at any differently than any other relationship. (I don’t know if any of this makes any sense… it does in my head.) Dahlia’s novels always have some amount of diversity in them and I really appreciate that.

I’m not going to say a whole lot more here except that Right of First Refusal was just a fantastic book all the way around. It was funny, sweet, sexy and even punched me in the feels a couple times. I found it easy to get lost in the characters and their story and the way everything connected. I didn’t want to put this book down once I started… in fact, I got a little growly when I had to. I’m looking very much forward to Frankie’s story in Out on Good Behavior. I’ve got my fingers crossed it really does come out in June. It’s not been long since I left this world, but I’m ready to dive back in regardless.

“The thing about the stars, about everything that’s bigger than us, is they never fucking change. The Big Dipper looks the same here as it did in Indiana as it did in Stone Creek as it did in Philly.”

It’s impossible to tell who comes first, impossible to be aware of anything at all except that the world suddenly seems full of stars.

Have you read any of Dahlia Adler’s books?
If so, what did you think?
If not, do you plan to?

3 responses to “In Review: Right of First Refusal (Radleigh University #2) by Dahlia Adler”