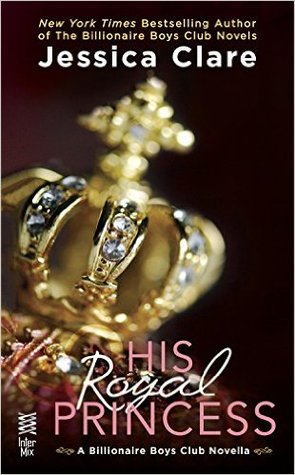 Their romance led to a royal wedding in Once Upon a Billionaire. Now see how it all began for Princess Alexandra of Bellissime and American actor Luke Houston in this novella from New York Times bestselling author Jessica Clare.

As heir to the throne of Bellissime, Princess Alexandra is supposed to be cool and calm...not crushing on a movie star. When she hears that Luke Houston is filming a scene for his next movie in her tiny country, however, she can’t resist sneaking onto set to get a glimpse of the Hollywood hunk.

When Alex is almost caught on set by the press, she ducks into the first available hiding place—only to find herself in Luke’s private trailer, and getting much more than just a glimpse of him. It’s an up close and personal encounter that sets her heart aflutter, and sets her mind on some very unladylike plans to get to know him better...

In His Royal Princess, we are treated to a look at the whirlwind romance that led to the royal wedding in Once Upon a Billionaire. It was a wonderful little bite-sized delight! I’m a sucker for regular person/famous person pairings, but this might be the first time I’ve read about two famous people – from admittedly VERY different backgrounds – getting together though. Who knew reading about an American actor and a European princess could be so much fun?

When I read Once Upon a Billionaire, I couldn’t help but be intrigued by the circumstances that brought these two together. I was thrilled to learn there would be a novella that told their story. Alex and Luke were the “fall for immediately” type of characters.Alex was wonderful. She was a smart and strong, if fairly well sheltered, character. (And, unlike her cousin Griffin from OUaB, she was NOT snobby and elitist. I loved that she rose above that.) Luke was hot and charming. He was also a really good guy. They clicked from the start – even though there was a lough out loud HILARIOUS misunderstanding that led him to believe she was a hooker – and it was easy to see something real building between them in each of their interactions. Despite being from completely different backgrounds, they just worked. Of course their relationship had some challenges, but they were adults and addressed them as such. And, because this is a novella, there wasn’t a lot of time spent on the drama and it definitely wasn’t angsty. It certainly left me with a big, cheesy grin on my face.

This was a wonderful addition to the Billionaire Boys Club series. It was a super quick read, but it still had all the funny, sweet and sexy moments I’ve come to expect in this series. Though it was just under 100 pages, I felt like I got a pretty good handle on both Alex and Luke’s characters and I was definitely sucked into the story. His Royal Princess is definitely a must-read for anyone who is a fan of the Billionaire Boys Club series. It’s a fun bonus you’ll be really happy you read. And, again, if you’re NOT reading this series, you should be. So get on that!

One response to “In Review: His Royal Princess (Billionaire Boys Club #3.5) by Jessica Clare”