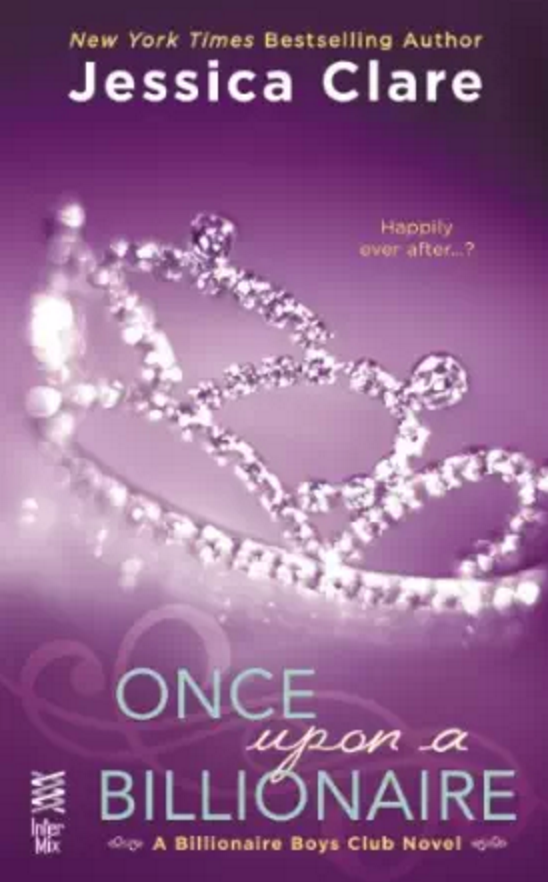 Once Upon a Billionaire by Jessica Clare
Series: Billionaire Boys Club #4
Genres: Adult, Contemporary, Romance
Publication date: April 15, 2014
Publisher: Penguin/InterMix
Format: eBook, 263 pages
How I got it: I bought it!
Add it: Goodreads
Buy it: Amazon | Barnes & Noble | iTunes
My rating:
Heat level:

As a member of the royal family in a small European country, Griffin Verdi’s presence is requested at the wedding of the century. The scholarly billionaire feels out of his depth in social situations, so a good assistant is required—especially when dealing with royal etiquette.

Unfortunately for Griffin, he’s stuck with Maylee Meriweather, a pretty, charming, and thoroughly unsuitable woman who doesn’t know a thing about high society—but she sure can kiss. Her lack of polish may sink Griffin, because after all, even his money can’t buy class. But through Maylee’s eyes, he’s starting to appreciate the simple things in life—if simple means the most complicated woman he’s ever met.

Once Upon a Billionaire sounded like a fantasy come true when I first read the blurb. Small-town, southern girl gets a chance to be an assistant for royalty all while attending a royal wedding overseas? Um, yes. I was all over it. I definitely enjoyed it, even if *maybe* not quite as much as the others in this series. That said, it was still a really good, four star read for me.

Maylee was totally over the top and I can see how some people might be put off by her. I wasn’t. I found her bumbling, rambling southern self absolutely charming. She was so far out of her element, but I loved that she still tried. She was stronger than she appeared and that became obvious the longer the book went on. I was NOT a huge Griffin fan in the beginning. He was so snobby and often downright rude, even if he did try to hide it under the guise of his upbringing. I wanted to smack him several times for the way he behaved towards Maylee. I don’t care if she was hired help or not… his behavior was tough to take at times. What I will say is that his flaws definitely paved the way for some serious character growth and I was singing his praises by the end of the book. I might not have liked where he started out, but I like where he ended up.

Because of my initial issues with Griffin’s character, it made it tough for me to root for anything between him and Maylee at first. I liked her. I wanted her to be happy. I just wasn’t sure he was the guy who could or would give that to her. Sure, he was attracted to her. They had a quiet kind of chemistry that intrigued me, but it really took awhile before I started to truly “ship” them. Before it was all said and done, I was firmly in their court and hoping they could work things out… mostly hoping that Griffin would put his preconceived notions aside and be the guy he could be for Maylee. Because that guy? That guy was a good guy. He was easy to like.

Once Upon a Billionaire might not have been my favorite book in the series and I definitely had some issues with it at times, but when it was all said and done, it was a book I really enjoyed. After some time, it was easy to get lost in the fairytale and shut out some of the character flaws that bothered me. Much like the other books in the series, this one was funny, swoony and even smokin’ hot at times. I liked and appreciated Griffin’s character growth and the romance was fun once it really started. All in all? A really good addition to the Billionaire Boys Club series.