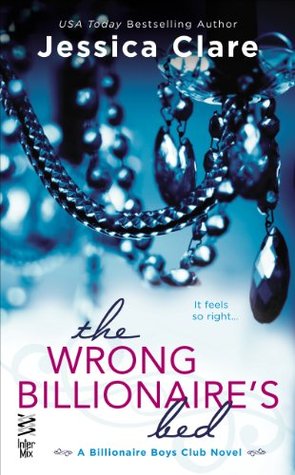 Publication date: April 7, 2015
Publisher: Berkley
Format: Paperback, 304 pages
How I got it: From the publisher
Buy it: Amazon | Barnes & Noble | iTunes
My rating:
Heat level:

Audrey Petty’s always been the responsible one. The good twin.  Successful, dependable, and trustworthy–that’s Audrey. She’d be the perfect girlfriend for her childhood crush, billionaire Cade Archer…except that she’s pretty sure she’s not even on his radar. But when fate (and her chaotic twin) come together, Audrey finds out that she’ll be spending the next month with Cade at his remote cabin retreat. It’s a dream come true…

Until she meets her worst nightmare.

Billionaire playboy Reese Durham is used to seducing women to get what he wants. But when stiff, too-proper Audrey bursts into the private mountain lodge and scares his companion out the door, it’s time for a little revenge. It’s clear that Audrey’s in love with his buddy, Cade…and it’s clear to Reese that blackmailing Audrey with this information can get her to agree to just about anything. Like furtive kisses in the dark, or a secret rendezvous in the woods. Audrey may think she knows what she wants, but Reese is determined to show her what she needs.

And as Reese discovers the volatile minx behind the buttoned-up exterior, he starts to think maybe she’s just what he needs, too.

I read The Wrong Billionaire’s Bed a couple weeks ago when I decided to binge the entire Billionaire Boys Club series. It’s the third book in the series and definitely one of my favorites. (Though, let’s be real… I enjoyed each and every one of them.)

When I started The Wrong Billionaire’s Bed, I wasn’t sure how it was all going to flow for me. I’d been introduced to all the players at this point and I knew Audrey had it bad for Cade. I suspected Cade had eyes only for Audrey’s (evil) twin Daphne, but I wasn’t sure. I didn’t know if I’d still be wishing for an Audrey/Cade pairing once the book got started or if I’d be firmly in the Audrey/Reese camp. I just went in with an open mind and waited to see what happened.

I liked Audrey from when I’d seen her in the earlier books, but I really connected with her in this book. Who hasn’t been the victim of an unrequited crush at some point in their lives? I got her and could relate to her storyline with Cade. Her relationship with her sister and the devotion she had to her was a completely different story though. I didn’t like Daphne. At all. (Still don’t after finishing the series.) She was manipulative and took advantage of the people who loved her. Audrey would’ve done anything for her sister and Daphne didn’t give a damn. I know she’s her sister, but I wish Audrey had, for lack of a better way to say it, “grew a pair” a little earlier when it came to Daphne.

If I’m being totally honest, Reese didn’t win any points with me in the very beginning. Thankfully it didn’t take long before I was singing his praises. There were definitely things about his player ways that I didn’t like so much, but there was a whole lot more to him underneath. He was a good guy, even if he made some questionable decisions. I LOVED him with Audrey. They pushed each other’s buttons and their banter was brilliant. They had intense chemistry and some seriously scorching hot scenes together. Cade definitely faded into the background when they were together. I barely thought about him or Daphne because Audrey and Reese were the stars of this book. I couldn’t put it down once I started reading because I was so invested in them and their story.

The Wrong Billionaire’s Bed was a fantastic read. It was funny, sweet and HOT. I think I’ve said it in my review for the other two books in this series, but I’m going to say it again… if you’re a romance reader and you’re NOT reading this series, you’re missing out.