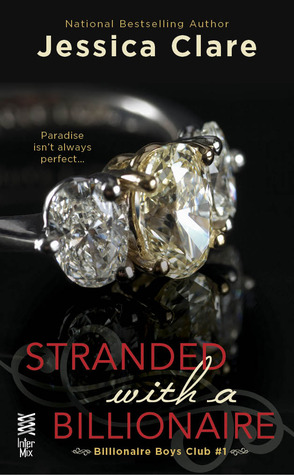 The Billionaire Boys Club is a secret society of six men who have vowed success – at any cost. Not all of them are old money, but all of them are incredibly wealthy. They’re just not always as successful when it comes to love…

He’s had a rough time after the death of his father and the betrayal of his fiancée. But with a visit to a recent business acquisition—a private island resort in the Bahamas—he has a chance to mend his broken heart.
When a hurricane blows in, a misplaced passport and a stalled elevator bring Logan together with an unusual woman named Bronte. She’s unlike anyone he’s ever met—down to earth, incredibly sensual, and even quotes Plato.

She also has no clue that he’s rich…

Bronte Dawson, a waitress from the Midwest, is stranded with the hotel’s domineering yet sexy manager Logan. What’s the harm in a little fling when it’s just the two of them, alone in paradise? But after several steamy island nights in Logan’s arms, Bronte’s ready to give her heart—and her body—to the man in charge.

But she soon discovers there’s more to Logan than he’s told her…a billion times more. Now, Bronte’s caught in a whirlwind affair with one of the world’s most powerful men. But can their love endure their differences or will it all just blow over?

Jessica Clare’s Billionaire Boys Club series has been on my radar for awhile now. I even owned three of the books in paperback. But, as tends to happen, I’d just not made time to read them. Well, last week when I was at the Berkley offices in NYC, her publicist talked about how she’d recently binged them and all her raving made me decide it was finally time to take the leap. Oh, am I glad I did. There are six books in this series (and an upcoming novella… and a spinoff series…) so I’ve got quite a bit of reading ahead of me. The good news is, at the time I wrote this post, I’ve devoured the first five books in this series… in less than a week. And you know what? I regret nothing.

Stranded with a Billionaire was a great book that definitely captured my attention and got me hooked on these characters. While I wouldn’t ever want to be stuck in an elevator (or on an island during a hurricane), no matter how hot the guy I was with is, I love the “trapped” trope when it comes to books. There’s something about the way characters get to know each other and connect during a time when they’re stuck that is real and holds my attention. In this case, it was fun to watch Billionaire Logan and waitress Brontë come together in what had to be really scary circumstances on the island. I won’t even talk about the elevator because just thinking about that scenario damn near gives me a panic attack. Of course, it was made more interesting by the fact that the reader knew the full truth about Logan’s situation and Brontë was clueless. I knew without a doubt it would cause some drama when the whole story came out, but I couldn’t wait to see how it would all unfold. I was totally hooked on these characters and their chemistry. Getting a chance to watch them grow was worth any of the drama that resulted from him keeping his situation secret.

Despite not being a huge fan of the billionaire trope in general, this book really worked for me. I adored Logan and Brontë. The secondary cast of characters were intriguing and definitely made me want to continue reading so I could get their stories as well. It was super sexy, but still sweet and funny at times, too. I love romance and I’m definitely hooked on this series.

Have you read the Billionaire Boys Club series?
What’d you think?

What’s the last series YOU binged?