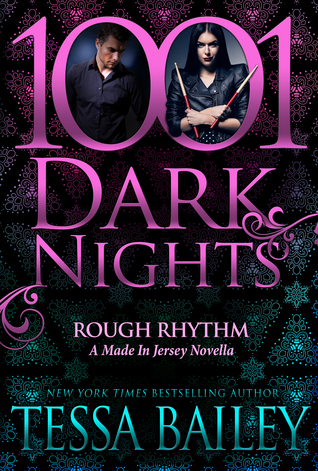 Rough Rhythm by Tessa Bailey
Series: Made in Jersey #1.5
Genres: Adult, Contemporary, Romance
Publication date: March 8, 2016
Publisher: Evil Eye Concepts
Format: eARC, 118 pages
How I got it: From the author
Add it: Goodreads
Buy it: Amazon
My rating:
Heat level:

Band manager James Brandon never expected to find the elusive satisfaction he’d been chasing, let alone stumble upon it in some sleezy Hollywood meat market. Yet the girl’s quiet pride spoke to him from across the bar, louder than a shout. Troubled, hungry and homeless, she’d placed her trust in him. But after losing the grip on his dark desires that one fateful night, James has spent the last four years atoning for letting her down.

This time I’ll finally crack him.

Rock band drummer Lita Regina has had enough of James’s guilt. She wants the explosive man she met that night in Hollywood. The man who held nothing back and took no prisoners—save Lita. And she’ll stop at nothing to revive him. Even if it means throwing herself into peril at every turn, just to get a reaction from her stoic manager. But when Lita takes her quest one step too far, James disappears from her life, thinking his absence will keep her safe.

Now it’s up to Lita to bring James back…and ignite an inferno of passion in the process.

So, funny thing about this review… I thought I’d written it already! It wasn’t until I sat down to write my review for Thrown Down, the next book in Tessa’s Made in Jersey series, that I realized I’d never written this one! I have no idea why I hadn’t posted this review yet. Believe me when I say it has nothing to do with how I enjoyed this book. At all.

I’ve been interested in Lita and James’ story since I read Crashed Out. I was excited to learn they would get the honor of the second book (er, novella… whatever) in the Made in Jersey series. I was even more excited to see it was a 1001 Dark Nights book. While the reader advisory might’ve made some leery of this book, it did just the opposite for me. It’d been awhile since I read a darker book and I trust Tessa to give me exactly what I need, no matter the subject. And boy did she ever.

Tessa packs quite a punch into Rough Rhythm. It may come in at only a little more than 100 pages, but it’s a full story with plenty of character development and, as you would expect, HOT AF sexy times. James and Lita have a past that includes more than just him being the manager for the band she’s in. It’s an interesting one, but their present is what I really loved most. Watching James struggle to balance his dark desires for Lita with his fear of turning into his father made this book for me. Of course, I also loved how Lita pushed him to realize she WANTED what he was interested in giving. This made them a powerful pair and one I’m not going to forget any time soon.

I’m the first to admit this book won’t be for everyone. If you’re put off by even the idea of fantasies of non-consensual sex, don’t even try this one. But if you’re open to it and willing to give two flawed characters a chance, you should. While this was definitely a complete story, I really wish it would’ve been a full length book. I loved James and Lita and I would’ve loved to see more of them. I’ll just keep hoping they pop up in the other Made in Jersey books because I’m really not ready to give them up just yet.

“All this time, you’ve treated me like a protector.” He pushed her thighs open. “But I was the one you should have been afraid of.”

He’d left before she could get a handle on her runaway desires, what they meant, how to voice them. If he’d just given her a minute, she would have begged for more.

How could he feel such protectiveness for Lita and want to dominate her in such a way? It was as though his two urges went hand in hand. Protect and punish. Cherish and … imprison. Keep her still and make her take.

Have you read any of Tessa’s books?
What are your favorites?

2 responses to “In Review: Rough Rhythm (Made in Jersey #1.5) by Tessa Bailey”