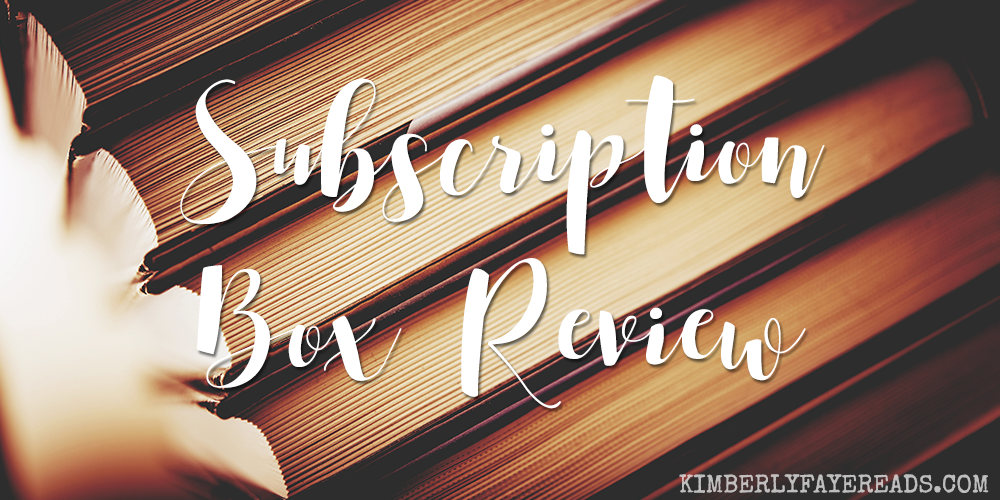 I know there are a ton of monthly subscription boxes out there. You can get everything from clothes to accessories to makeup and even books in one of these subscriptions. I’ve never been intrigued by the clothing or accessories boxes. I subscribed to a couple of the makeup boxes a few months ago, but after a month decided I was too picky (and not at all daring) to allow someone else to pick out what they think would be good for me. (I did keep the Julep Maven box, however. I’m just not sure for how much longer. I do love that you can actually edit the box and pick items you want, but I seem to always choose nail polish. How much nail polish do I really need?!)

The bookish boxes, of course, have always appealed to me, but I didn’t decide to jump in and subscribe to any of them until about a month ago. (Well, except for the Bookworm Box, which I was obsessed with for a few months in the beginning but no longer subscribe to because of the cost and the fact that I was getting duplicate books. But I do love that the proceeds go to charity.)

I decided to subscribe to OwlCrate, Book(ish) Box and Uppercase Box just to see what the fuss is all about. I’ve now received one of each of them. I was pleasantly surprised by the packages when they came in – who DOESN’T like getting surprises in the mail? (I mean, even if you’re paying for it.)

Now, let’s take a look at my latest boxes! 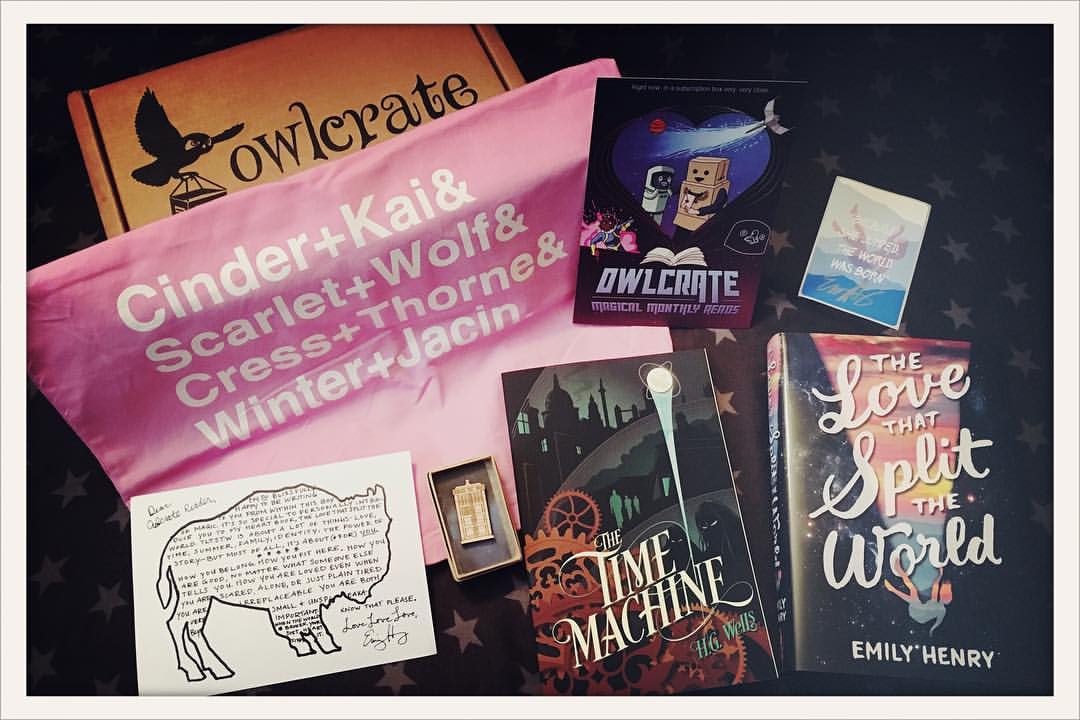 I gasped when I opened my first OwlCrate box. First, I’d been waiting to read The Love That Split the World forever. Of course, because of this, I had pre-ordered a hardcover of the book already. So, duplicate book. (Insert sad trombone noise.) The one I’d purchased from Amazon didn’t come with a signed bookplate, so that was a definite bonus. Being totally honest, the tote bag (from OwlCrate Shop) was my favorite part of this box. I mean, LOOK AT IT!!! (Insert all the heart eyes emojis.) That bag alone made me decide to do one more month of the box to see what they had up their sleeve for March. (The Dr. Who Brooch – from Vector Engraving – was cute, too, but I don’t watch the show so I didn’t flail over it as much as others might. I’m still glad to have this awesome artist brought to my attention though. Their Etsy shop has all kinds of cute things.) 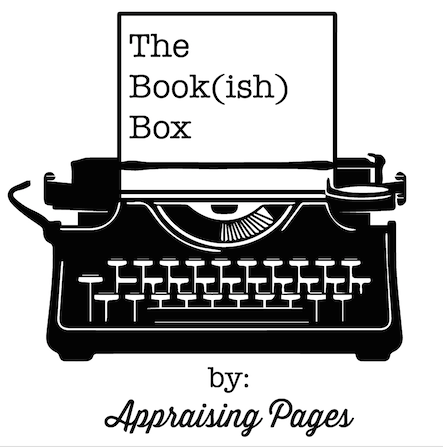 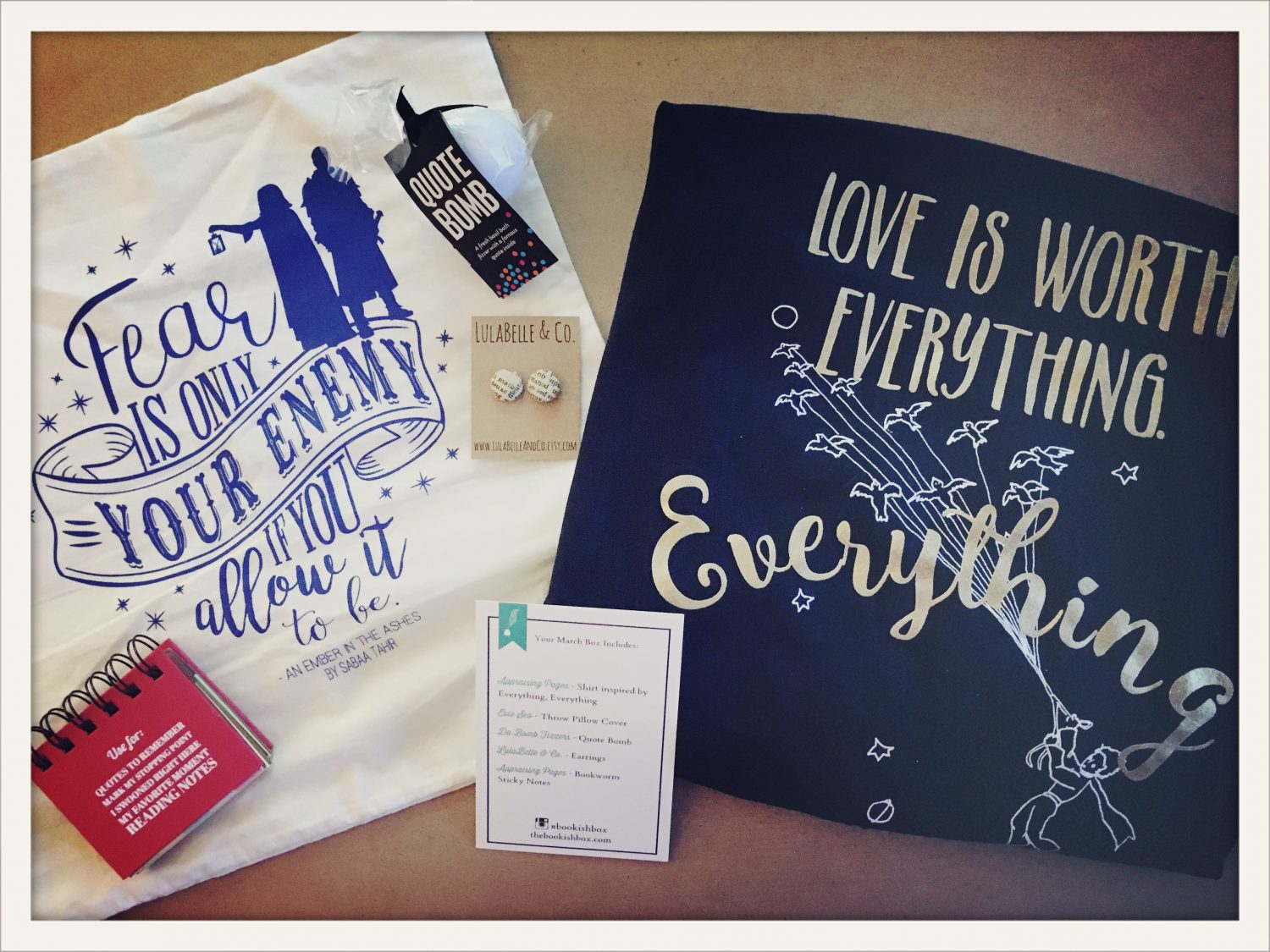 Can we talk about how much I LOVED my Book(ish) Box?! I recently decided I needed more bookish/nerdy t-shirts in my life and this one Appraising Pages one Everything Everything was a HUGE WIN. (I loved that book so damn much.) The earrings, from LulaBelle & Co., were freaking adorable. The little notebook of post it notes (also from Appraising Pages) will come in handy and the pillow case (designed by the amazing Evie Seo) is fantastic, even though I’ve not read An Ember in the Ashes Yet. The only thing that was a miss for me personally was the quote bath bomb (from Da Bomb Fizzers), but that’s just because a) I’m not a bath person and b) I can’t use scented bath products because of my psoriasis. I still love the idea behind it though.

The Book(ish) Box has several options and plans. I love the fact that they offer MANY size options. It stinks when us curvy girls can’t get the cute shirts, etc. that others can. That’s definitely not a problem with the Book(ish) Box. (Ok, you have to pay a couple dollars more for a larger size, but I am more than ok with that.) There are month to month and 3/6/12 month prepays for this subscription. (I’m just going to outline the regular price for the boxes, not the additional charges for larger shirts. Though, I pay $32 a month plus shipping for a 2X shirt.) At the time of my post, the Month to Month plan is $29.99, the prepays are $84.99/$164.99/$321.99, which breaks down to $28.33/$27.49/$26.83. (Prices do not include shipping, of course.) You’ll see the prepay savings are a little more here, but I’m not sure they’re worth dropping that big a chunk of change at the beginning. They aren’t for me, personally. This box was chock full of awesomeness and I think it was worth every penny. (Which was $37.50, including shipping.) 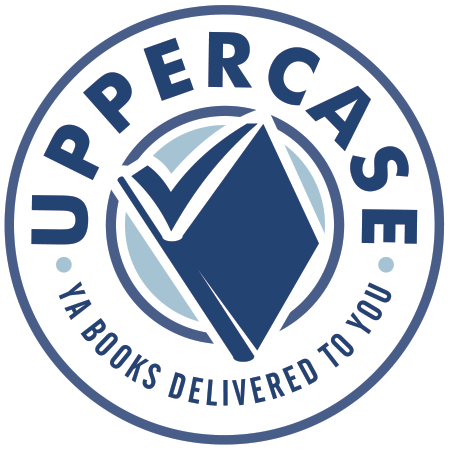 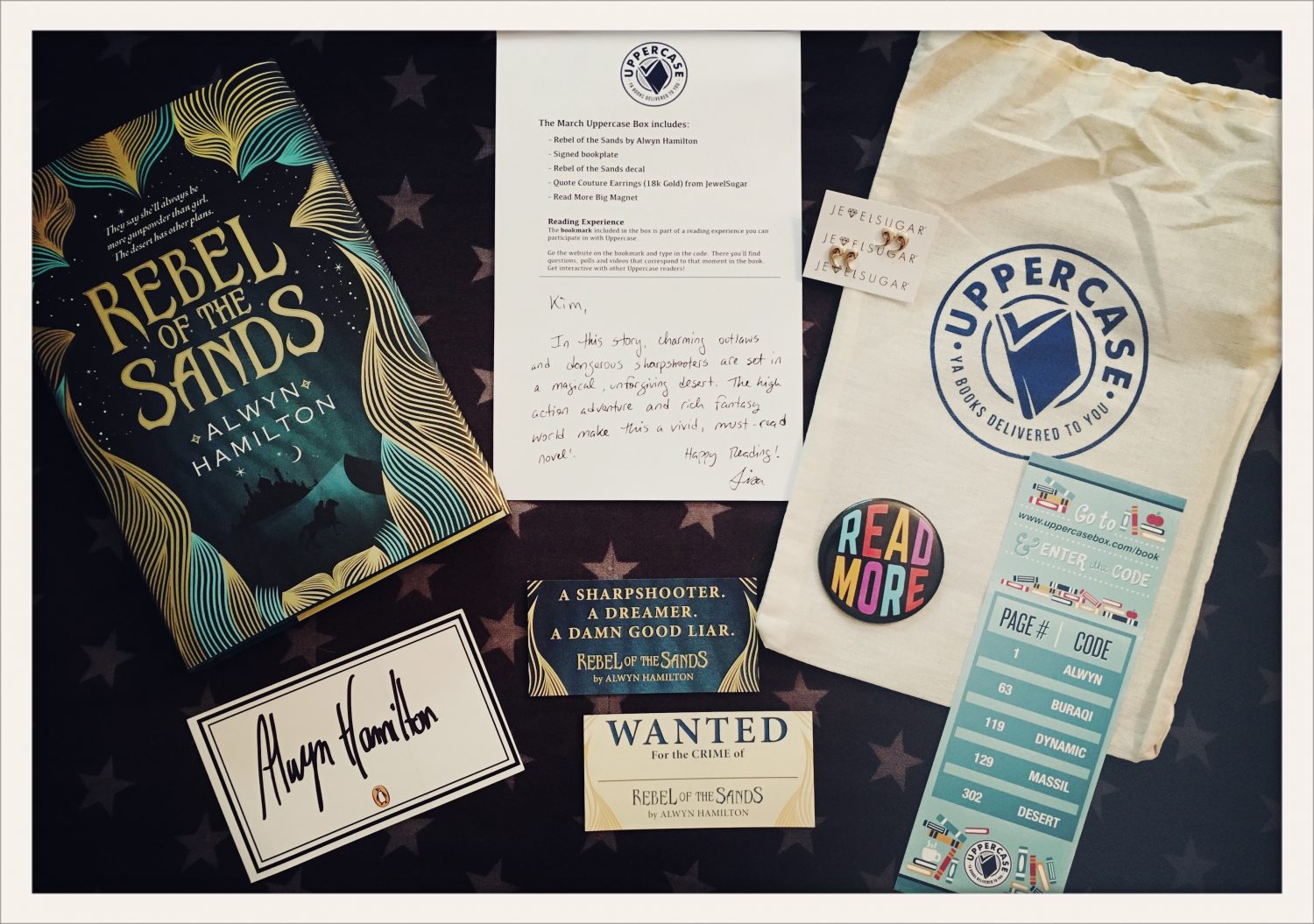 I was a little surprised when the Uppercase Box arrived and … it wasn’t in a box. Unlike the other two, it was just in a mailer. I was a little happier when I opened it and saw it was in a cute bag, but it definitely lost points for presentation. There’s just something exciting about “unboxing” your new goodies. I didn’t get that feeling here. I’m not thrilled with the book… I may or may not read it. It’s not my usual thing, even when I do read YA, but the reviews are good so I might give it a shot. I loved the magnet and the quote earrings (even though the posts were bent from mailing). The note from the author was a great touch and the bonus content is a fun addition. If I do decide to read the book, I’ll definitely be checking that out more. I love bonuses!

At just $23 a month (as of the time of this post), the Uppercase Box is the cheapest of the subscriptions I tried out. They also have an option to get the book without the goodies for just $17 a month. (I wish they had an option to get the GOODIES without the BOOK. I’d be all over that.) I appreciate that they also allow you to add extra items from PREVIOUS boxes to your upcoming box. (I’m totally sticking around at least one more month so I can get the gorgeous Anne of Green Gables scarf that was in the February box.) At $29.00 with shipping, it’s not a bad price. I don’t know if I’ll stick around past April though.

Speaking of the April Uppercase Box, supposedly it’s not to be missed if you’re a Harry Potter fan. So, do with that what you will. You can subscribe here if you want to give it a shot. 🙂

My final verdict on the bookish subscription boxes: they’re fun, even if I’m not entirely sure they’re worth the money for me personally. It may be the blogger thing, it may be that I am not as interested in YA as a lot of people. If I’m being totally honest, I liked the bookish goodies more than the books themselves. But those goodies aren’t worth the price for the full box each month. If I was going to choose to keep one of the boxes, it would be the Book(ish) Box, no question. I just might keep it a few months and see what comes of it, in fact. I think that all depends on what the goodies in the next box look like. 🙂

If, however, you’re a big YA reader who isn’t quite as picky as me, I think these boxes are a really fun way to be introduced to new authors and titles. And you already know how I feel about the goodies that ship with the book. 🙂

I was so excited about my bookish box subscriptions that I actually subscribed to Book(ish) Box TWICE. *sigh* Well, my loss is your gain because I’m giving one of the boxes away. It has been opened, but all the goodies are in there. Note: the shirt is a 2X, so depending on what size you wear, you’ll wind up with a lovely nightshirt. 🙂 I’m also giving away a hardcover copy of The Love That Split the World as, thanks to these boxes, I have an extra copy. Both of my giveaways are US only. Enter via the Rafflecopters below.

Do you subscribe to any boxes – bookish or otherwise?
If not now, have you in the past?
What are your favorites?