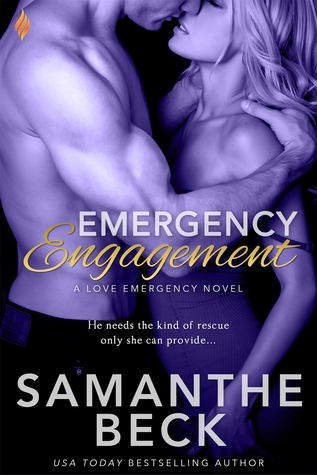 Glass artist Savannah Smith expected a marriage proposal for Thanksgiving—just not from her strong, silent, super-hot neighbor. But when misplaced mail and a wayward can of paint lands them in a compromising position right as her family arrives for dinner, they assume he’s “The One” she’s been talking about.

Then his family shows up.

Fate dealt a crippling blow to paramedic Beau Montgomery’s heart, and he isn’t about to put it at risk again. Except, with his mother crying tears of joy over his surprise engagement to the sexy little blonde next door, he can’t bring himself to ruin her “Christmas miracle.”

Somewhere between the paint can to the head and the chaotic family trip to the ER, Beau manages to talk Savannah into being his fake fiancée long enough to survive the holidays.

If, of course, they don’t fall in love first…

As a fan of Samanthe’s previous books, I was really looking forward to this new series. Who doesn’t have a “thing” for hot emergency responders? This one sounded like it would be sexy and fun and it was that and more. I even got punched in the feels a couple times.

You know how much I love my romance tropes. This one takes the fake relationship and mashes it up against friends to lovers and the result is a whole lot of awesome. Beau and Savannah are neighbors. They’ve seen each other around, but never really talked. If they had, they would’ve realized they were childhood friends. If they had, we never would’ve had the amazingly awkward scene where their parents walk into her apartment and find them in what appears to be a compromising position. That would’ve been sad because it was one of my favorite scenes in the book. There’s a whole lot of assuming and, next thing you know, their parents believe they’re engaged and the book is off and running.

I really liked both Beau and Savannah. My heart ached for the things Beau had been through in the past. I understood both why he was closed off and why his parents were concerned about him. Savannah just ended a relationship with a real slime ball. (Of course, she thought they were on their way to getting engaged, and had told her parents, hence the whole misunderstanding when they found her with Beau.) It was perfect timing for them to be reunited, even if the situation that brought them together was unconventional (and clumsy). They both benefitted from the fake engagement, but before they knew it, meddling mothers had run away with it and it became a much bigger issue than they’d intended. Of course, their feelings toward the other was starting to show and their chemistry wasn’t to be denied, so it got messy fast.

Emergency Engagement was a fantastic start to a new series I’m ridiculously excited about. It was just as hot as I expected from Samanthe, but had a pretty decent dose of swoon along with it. There were also two scenes in particular that packed an emotional wallop that I really wasn’t expecting. (Yes, there were tears.) They were pretty short lived though and, in the end, there were nothing but smiles. I can’t wait for the next book in this series. (I hope it’s about Beau’s partner, Hunter.)

“I don’t make promises I’m not one hundred percent sure I can keep. That said, I promise you this: if you take me on, I’m yours – all there is of me – for as long as you’ll have me.”

Wine lover, sleep fanatic, and USA Today Bestselling Author of sexy contemporary romance novels, Samanthe Beck lives in Malibu, California, with her long-suffering but extremely adorable husband and their turbo-son, Hud. Throw in a furry ninja named Kitty and Bebe the trash talking Chihuahua and you get the whole, chaotic picture.

When not clinging to sanity by her fingernails or dreaming up fun, fan-your-cheeks sexy ways to get her characters to happily-ever-afters, she searches for the perfect cabernet to pair with Ambien.

Have you read any of Samanthe’s books in the past? Which are your favorites?
Do you have a “thing” for emergency responders? I know I do!