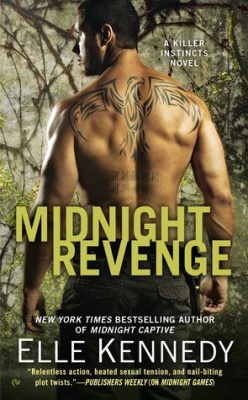 Out of all the stone-cold mercenaries in Jim Morgan's black ops organization, Derek “D” Pratt is the most intimidating. He is tight-lipped and covered in tattoos, and even the other guys on his team are afraid to ask him about his past. D’s been off the grid for years, but after his teammate Sullivan is mistakenly captured in his place, D is forced to come out of hiding and face his demons.

When D lands in Mexico, he’s ready to risk everything to save his friend. To complicate matters, Sofia Amaro, a feisty doctor whom D had a one-night stand with months ago, has tracked him down. And in an instant she’s unintentionally caught up in his life-threatening rescue mission.

Now D must extract not one but two people from the most violent world he's ever encountered. And one of them is carrying his child...

If you read my review for Midnight Captive, you know how much I was looking forward to this book. Not as much because it was Derek’s book (because he’s really never been one of my favorites) but because I HAD TO KNOW what happened to Sully. I went into this book flat-out terrified about what would wind up happening to Sully and on the edge of my seat, hoping for the best.

I’m not entirely sure what I expected of Derek’s backstory – and his present day – but it was so NOT what I got. I knew he was messed up in bad things before, but I had absolutely no idea what he’d been through in his past. My heart seriously broke for him. As tough as he was on the outside, I was surprised to get a chance to see a vulnerable side of him. I know I have Sofia to thank for that. I’m not sure anyone else would’ve brought that out of him. While I liked Sofia’s strong and sassy self from the start, it took longer for me to fully embrace Derek. By about halfway through, I was a total convert who was loudly singing his praises.

While I didn’t really go into this book for Derek’s story, but for more about Sully and his connection with Liam, I have to say this is one of my favorite books in the series so far. It was unexpected. Plus, you know, I loved the characters. It wasn’t an easy read though. Between the things Derek was offering up from his past, the danger he, Sofia and their unborn child were in and the awfulness of what happened with Sully, I had a fair few feels. This book was sexy and action-packed and I really enjoyed pretty much everything about it.

I’m just gonna say it… I need a Liam/Sully book. Like, stat. As long as this whole thing between them has been drug out, I NEED to see it all explode. I’ve shipped these two HARD. I demand a HEA for them… even if it takes some time to get there. I’d kinda hoped for a little more of them in this book, but it was definitely more about his capture and the fall out than this THING going on between them. I suspect Elle won’t let me down and hope the next book, whenever it might be released, is their story and that it’s worth all the wait.

His past choices, the mistakes he’d made… He didn’t dwell on them, because regret was a waste of time. When he made a decision, he was fully prepared for the consequences. If he took a life, he made peace with the action before he even pulled the trigger. And once the deed was done, it was fucking done. No looking back. No moaning and griping and feeling bad about it. Guilt and regrets were for weak men who couldn’t stomach the choices they’d made in their lives.

He was a cold bastard. Ruthless. Violent. He’d been that way since he was eight years old, and if he’d ever had the ability to feel compassion or tenderness, then it had been beaten out of him a long time ago.

She leaned in and brushed her lips over his, and he surprised himself by deepening the kiss before she could pull away. Greedy and demanding, shoving his tongue through her parted lips in a desperate thrust. He wanted to swallow her up, to fucking drown in her. He didn’t understand it and he hated himself for his weakness, for this unexpected need she’d unleashed inside him. Not tension, not the carnal urge to empty his seed somewhere, but real, bone-deep need. For another person. For her.

Have you read any of Elle’s books?
Are you a fan of romantic suspense?
(If so, you totally need to read this series!)