Welcome to my stop on the blog tour for Chanel Cleeton’s latest, Between Shadows! If you enjoy a good, suspenseful romance, look no further. This one is excellent! 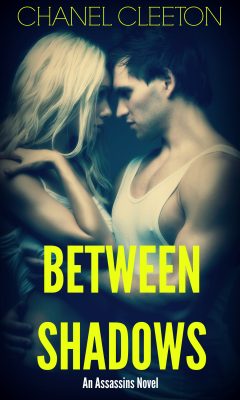 X lives by three rules: Show no weakness. Trust no one. Don’t get caught. She lives by the rules they gave her.

The Academy—set in London, shrouded in secrecy—it trains spies, computer experts, and assassins. Their mission? Dispensing justice and altering the course of world politics. Or so they think. In a world where secrets are weapons and some kills are impossible to forget, everything X thought she knew about her life is about to change.

She’ll need every skill they taught her, to stay alive.

I’ve been a fan of Chanel’s work since I first picked up I See London nearly two years ago. It and the rest of her International School series was fantastic. I was obsessed with her Capital Confessions series last year. Steamy hot romance based in DC with as much politics and scandal as you can handle? Yes, please. When I learned Chanel was writing a new series based around a group of assassins, I couldn’t wait to get my hands on the first book. And oh boy, was it good!

Between Shadows starts out with quite a bang. I was completely sucked in from the very start. The suspense had me on the edge of my seat as I kept trying to put all the pieces together to figure out what exactly was happening. The romance was great, too. I love a good second chance romance. X and Luke gave me just that. To say their history was complicated would be a HUGE understatement, but I had no doubt they belonged together. It was just a question of whether they would both make it through to the end to be together.

I loved the characters in Between Shadows. X was fascinating. Talk about a kickass woman. Yes, she could be a little cold – she was an assassin after all – but there was much more to her than met the eye. Her weak spot was her sister Grace. (And Luke.) Luke was a badass with a heart of gold. (At least when it came to X.) I absolutely LOVED the two of them together. Romance is a big part of this story and there’s some kissing (and more) but it’s not quite as steamy as most new adult books I’ve read. Surprisingly, I kinda liked that. It worked for the two of them. They had far more on their plates than sexy times. You know, like figuring out who was trying to kill them and staying alive.

Between Shadows was a great start to a unique new series. I’m not sure what’s next, but I’ll be waiting to find out and I’m sure I’ll have a total case of grabby hands for the next book.

I do the job I was born to do. But sometimes it’s not just the job, sometimes the scales call to me like a siren’s song, winding their way through my fucked up head and dark heart. Sometimes it’s not the darkness that calls to me, sometimes it’s more. It’s justice, and vengeance, and the urge to bring balance to a world that doesn’t give a shit about fair, or right and wrong.
And sometimes I’m just a girl, wanting to kick some ass.

Sometimes justice fails. I provide a different form, one that has nothing to do with courts of law.

Have you read any of Chanel’s books in the past?
Does this one sound like something you’d enjoy?

One response to “Blog Tour, Review & Teasers: Between Shadows by Chanel Cleeton”