Welcome to my stop on the blog tour for Lisa Desrochers’ latest, Outside the Lines. It’s the first book in her new On the Run series and if you’re a fan of romance with an edge of suspense, you’ll want to check this one out! 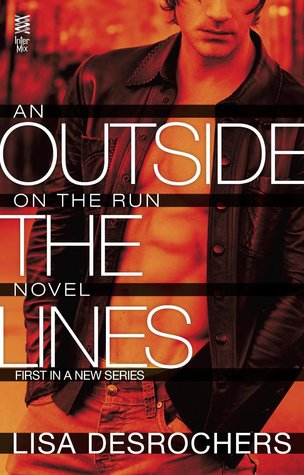 Outside the Lines by Lisa Desrochers
Series: On the Run #1
Genres: New Adult, Contemporary, Romance

As the oldest son of a Chicago crime lord, Robert Delgado always knew how dangerous life could be. With his mother dead and his father in prison, he’s taking charge of his family’s safety—putting himself and his siblings in witness protection to hide out in a backwater Florida town.

Fourth grade teacher Adri Wilson is worried about the new boy in her class. Sherm is quiet and evasive, especially when he’s around his even cagier older brother. Adri can’t help her attraction to Rob, or the urge to help them both in whatever way she can.

But the Delgados have enemies on two sides of the mob—their father’s former crew and the rival family he helped take down. It’s only a matter of time before someone finds them. And if Rob isn’t careful, Adri could end up in the crossfire...

I was a big fan of Lisa’s first new adult series – A Little Too Far – so I couldn’t wait to see what she would give us next. I was excited to learn about the On the Run series and, after reading the first book, I have to say I’m definitely looking forward to continuing on with the remaining books in the series.

If I’m honest, it did take me a bit of time to get into Outside the Lines. I think it was because there were so many characters thrown at me at once and I wasn’t really sure what was going on. But, after a couple chapters, the book hit its stride and I was in for the long haul. I didn’t love Robert right off the bat, but I respected the sacrifices he was willing to make for his family and how protecting them was at the top of his mind all the time. He was a bit brusque and closed off, but it made sense. I did warm up to him sooner or later though. Adri, however, I liked from the start. I loved how she worried for and looked after those she met. Of course, this would prove to be a problem with Rob’s little brother in her class and her wanting to find out what was going on that had him so quiet and withdrawn. The Delgado, or Davidson, family have a lot to hide and the stakes are high.

The romance was a bit of a slow burn, for obvious reasons, but there’s no denying the amount of chemistry Adri and Rob had from the very start. I wasn’t crazy about some of the things that happened as Rob was trying to fight his attraction to her, but I have high expectations of the characters in the books I read. While I was annoyed, I wasn’t ever tempted to stop reading. Despite the danger that could potentially come from their pairing, I wanted to see them together. I needed Rob to reveal his secrets and realize Adri really was worth the risk. I wasn’t disappointed.

Despite a bit of a slow start, I thought Outside the Lines was an entertaining and sexy read with an edge of suspense. There’s not a true cliffhanger, but I definitely need more of the story and can’t wait to see what happens and find out more about Lee and Oliver’s history in Over the Line. I’ll be waiting with total grabby hands for its release.

“You, Adri Wilson, are going to be my downfall. There have to be a million reasons why I can’t let that happen, but right at this instant, I can’t think of a single goddamn one of them.”

I might have been going at the speed of light, but it’s only because every time he touches me my whole body lights up. It’s like he’s electricity and I’m the bulb.

Tags: 4 Star Review, Blog Tour, In Review, Lisa Desrochers, On the Run, Outside the Lines

2 responses to “Blog Tour, Review, Teasers & Excerpt: Outside the Lines (On the Run #1) by Lisa Desrochers”