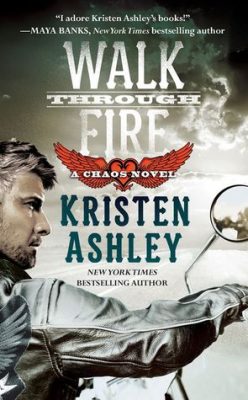 Millie Cross knows what it's like to burn for someone. She was young and wild and he was fierce and even wilder-a Chaos biker who made her heart pound. They fell in love at first sight and life was good, until she learned she couldn't be the woman he needed and made it so he had no choice but to walk away. Twenty years later, Millie's chance run-in with her old flame sparks a desire she just can't ignore. And this time, she won't let him ride off...

Bad boy Logan "High" Judd has seen his share of troubles with the law. Yet it was a beautiful woman who broke him. After ending a loveless marriage, High is shocked when his true love walks back into his life. Millie is still gorgeous, but she's just a ghost of her former self. High's intrigued at the change, but her betrayal cut him deep-and he doesn't want to get burned again. As High sinks into meting out vengeance for Millie's betrayal, he'll break all over again when he realizes just how Millie walked through fire for her man...

Kristen Ashley has done it again! (Not that I’m at ALL surprised by this. She’s a genius.) I started Walk Through Fire in the midst of a moment of panic during a HUGE book hangover and it was exactly the thing I needed to get me over it. (And, of course, leave me with a hangover for a completely different book.)

Anyone who follows my blog knows I’m a total sucker for a second chance love story. It’s one of my favorite tropes. The first part of Millie and Logan’s story ended twenty years ago – we don’t know exactly why, but we do know it wasn’t pretty. I had some rough moments with Logan during the beginning of this story, ones I was entirely sure I’d be able to move past, but I did. Oh, did I ever. It took some time, but I was singing the man’s praises for sure by the end.

I liked Millie at the beginning, though I was a little cautious because I didn’t know what exactly she’d done in the past to break Logan like she did. I didn’t want to be too far in her corner if there was a chance she’d done something unforgivable. Gods, it was just the opposite. Of course, I’m not going to spoil things for you, but damn. Her story broke my heart. It was with the revelation of the truth that Logan finally won me over entirely, too. It wasn’t all pretty, but it was real and raw and I felt every single minute of it.

Of course, moving on from issues of the past was only part of the challenge for this couple. His daughter was determined to cause problems – I don’t know when I last wanted so badly to wring the neck of a character in a book – and there’s the ongoing saga with Benito that kept me on edge several times throughout this book. Through it all, however, there was no doubt in my mind that Millie and Logan were the real deal and that they would, eventually, work past the other things and move towards something real again. They had it all – chemistry, passion, love and mutual respect. They got each other. They understood each other’s lives. They belonged together.

I loved getting lost in the world that Kristen has built here with Chaos. I love her writing, characters and stories. I feel like I’m living it, not just reading it. I had ALL THE FEELS and I loved (nearly) every second of it. And that epilogue? *contented sigh* I couldn’t have asked for anything more perfect than that was. I’m not entirely sure who gets the next book (but damn, I sure hope it’s Hound) but I do know I’ll be waiting anxiously to find out and get my hands on it.

Kristen Ashley was born in Gary, Indiana, USA and nearly killed her mother and herself making it into the world, seeing as she had the umbilical cord wrapped around her neck (already attempting to accessorise and she hadn't taken her first breath!). Her mother said they took Kristen away, put her Mom back in her room, her mother looked out the window, and Gary was on fire (Dr. King had been assassinated four days before). Kristen's Mom remembered thinking it was the end of the world. Quite the dramatic beginning.

Kristen grew up in Brownsburg, Indiana and has lived in Denver, Colorado and the West Country of England. Thus, she's blessed to have friends and family around the globe. Her family was (is) loopy (to say the least) but loopy is good when you want to write. They all lived together on a very small farm in a small farm town in the heartland. She grew up with Glenn Miller, The Everly Brothers, REO Speedwagon and Whitesnake (and the wardrobes that matched).