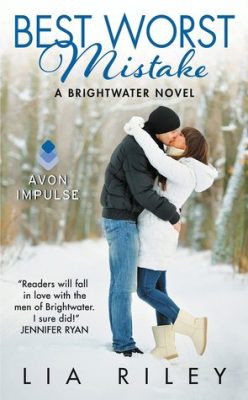 Smoke jumper Wilder Kane once reveled in the rush from putting out dangerous wildfires. But after a tragic accident, he’s cut himself off from the world, refusing to leave his isolated cabin. When a headstrong beauty bursts in, Wilder finds himself craving the fire she ignites in him, but letting anyone near his darkness would be a mistake.

After her Hollywood life went up in smoke, Quinn Higsby decided to leave Tinseltown behind and return to Brightwater to care for her ailing father. She spends her days in a small bookstore, until her peaceful existence is up-ended by a fascinating but damaged man. Quinn is determined not to be scared off by Wilder, not once she’s experienced the heat of his passions.

But when an arsonist targets the community and Wilder is accused, he must confront the ghosts of his past. Will his desire for Quinn burn him up or will he be able to tame the wildness inside and rekindle a hope for their future?

Lia Riley is one of my new favorite adult contemporary authors. If it wasn’t official after Last First Kiss and Right Wrong Guy, it definitely is after Best Worst Mistake. I loved her new adult series, but I think I might love the Brightwater series even more. (Shhhhh.) I’ve been looking for a series to fill that small town sweet romance hole left in my heart when Candis Terry’s Sweet, Texas series ended and this is definitely the one. Of course, it’s also over now (*wipes tears*) so I guess I have to go back to the drawing board again.

Best Worst Mistake was exactly the book I needed in my life when I read it. It was sweet, sexy, heartwarming and romantic. I fell head over heels for the characters and loved their story. It’s a kind of Beauty & the Beast retelling and it just totally made my heart happy. Be prepared for the big cheesy grins – and a fair few feels – when you read this one.

I’ve been waiting for Wilder Kane’s story since I first heard about him earlier on in the series. And, let me tell you, Lia wastes no time jumping into the story this time around. That first chapter? Holy cow. There wasn’t a chance in hell I could put this book down once I started. It was definitely of the “read in one sitting” variety for me. Wilder was nothing short of amazing. I do love watching a closed off man let go of the baggage of the past and realize that life can still be good – or even great – even if it’s different than he thought it would be. I just wanted to give him a big hug and tell him it would be alright… that it would be BETTER than alright.

Quinn was no slouch herself. She was intelligent, sassy and a little bit awkward. I swear, I fell for her about the first time she started babbling – something she does A LOT. I loved her quirky side and her book-themed tees. I liked how honest she was and my heart ached for the things she was dealing with when it came to her father and his health… and the possible implications on her own health. She was such a realistic character. You couldn’t help but love her.

Together Wilder and Quinn were nothing short of magical. There was heat – oh boy was there – but there was also something real and raw, right from the beginning. She helped him realize that he’s not a broken man and that he’s more than the sum of his injuries. He helped her realize that life is worth living and enjoying to the fullest, even if there might be an expiration date on the memories made. My heart was so full as I watched these two come together, let go and find something real. Add to that appearances by the earlier couples and Grandma and this book was the perfect series-ender.

I’m so sad this series has come to an end, but even more, I’m excited to see what Lia gives us next. She’s definitely on my auto-buy author list. I’ll read anything she writes and I strongly suspect I’ll continue to love each new character, book and series. I can’t recommend this one enough!

One response to “In Review: Best Worst Mistake (Brightwater #3) by Lia Riley”