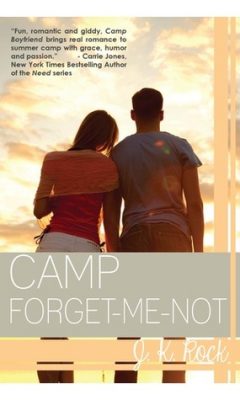 Playing it safe and fitting in may have rocketed Kayla West into the “In” crowd at Camp Juniper Point, but it’s left her lonely. The only person she’s ever been herself with was her former best friend, Nick, an outsider that pushed her to join the most popular girls cabin two years ago. Too bad being a Diva meant pressure to break up with Nick. Of course, Kayla had her reasons, but Nick can never know the real one.

She always thought she'd forget him one day and move on. Until he returns to camp a super-hot Olympian snowboarder. Now, every girl wants him and Nick seems determined to show her what a mistake she made. Or at least, she thought that's what he wanted. But when Nick starts sending her private notes--just like he used to--she wonders what kind of game he's playing. Nick's attention is making it tougher to stay in the background and play in safe, forcing Kayla to make a decision--stay on the sidelines and get overlooked? Or take a chance on trusting Nick and, maybe... herself.

I’ve found each book in J.K. Rock’s Camp Boyfriend series wonderful in their own way and Camp Forget-Me-Not was no exception. I’m really sad to see this series come to an end, but I think it went out on a high note.

Being perfectly honest, Kayla wasn’t the easiest character for me to like at first. She’s a popular girl and it’s obvious how much that popularity means to her. She’s sacrificed her relationship with a longtime friend, Nick, in favor of being with the “right crowd” and she’s regretting it now that Nick is famous and back at camp. I questioned her motivations at first. Did she only want him because he was famous or was it more than that? Did she miss the strong connection they had? What was the real story here? Because the story was told solely from Kayla’s POV, I couldn’t get a real feel on what was going on with him outside of the scenes he shared with Kayla. So I was left with a lot of questions all around.

The romance wasn’t my favorite in this book – I definitely wanted MORE. MORE of everything – communication, time together, kissing. I did find myself frustrated with Kayla and Nick at times because of the lack of communication. Then, you know, I remembered what it was like to be that age and I tried to take it a little easier on them. 😉 I did, however, LOVE reading these important scenes that shaped their friendship in the past and led them where they were today. And when they were good together, they were REALLY good together. The issues of the past had definitely left a mark on their friendship (and the possibility of something more) but I did to see them move on and realize there was something good there.

My favorite part of this book, hands down, was Kayla’s growth. We spend the entire book in her head, so we get it all. I loved reading along as she came into her own and realized who she was, outside of her friends. Friendship is so important, but so is being true to you. She was a far more likable person once she started to realize this. I loved her journey.

Despite my small issues with the romance, Camp Forget-Me-Not was a great book. It was a wonderful conclusion to the Camp Boyfriend series. I love what Joanne and Karen Rock did with this series. Each of the books made me nostalgic for the time where summer was the most important part of the year. I never did go to a camp like this one, but my days and nights were more often than not spent with neighbors and friends, making memories. You can’t read these books without being transported back there. I’ve read them all with a big, cheesy grin and, often, a tear in my eye. I am kinda sad to say goodbye to this series and these characters, but I imagine I’ll do rereads in the future.

J. K. Rock is the pseudonym for YA writing partners - and sisters-in-law - Joanne & Karen Rock. After years of comparing notes on their favorites books and films, often dreaming up new endings to suit them, they decided to write their own stories. Their first Young Adult book, CAMP BOYFRIEND, is part of a three-book series. CAMP PAYBACK will be an April 2014 release, and CAMP FORGET-ME-NOT arrives in Fall 2014. Visit the Camp Boyfriend website at http://campboyfriend.net to learn more about the free novellas they are offering readers prior to each full length book. Individually, Joanne Rock is an award winning Harlequin author published in 26 countries and translated into 20 languages. Karen Rock writes critically acclaimed stories for Harlequin Heartwarming including her latest, HIS HOMETOWN GIRL.