It’s time for another installment of Minute Reviews! This one is all about Sarah MacLean (again) but this time it’s her Rules of Scoundrels series! 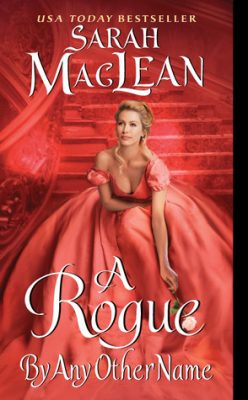 A Rogue by Any Other Name by Sarah MacLean
Series: Rules of Scoundrels #1
Genres: Historical Romance
Publication date: February 28, 2012
Publisher: Avon Books
Format: eBook, 386 pages
How I got it: I bought it!
Add it: Goodreads
Buy it: Amazon | Barnes & Noble | iTunes
My rating:

A decade ago, the Marquess of Bourne was cast from society with nothing but his title. Now a partner in London’s most exclusive gaming hell, the cold, ruthless Bourne will do whatever it takes to regain his inheritance—including marrying perfect, proper Lady Penelope Marbury.

A broken engagement and years of disappointing courtships have left Penelope with little interest in a quiet, comfortable marriage, and a longing for something more. How lucky that her new husband has access to such unexplored pleasures.

Bourne may be a prince of London’s underworld, but he vows to keep Penelope untouched by its wickedness—a challenge indeed as the lady discovers her own desires, and her willingness to wager anything for them... even her heart.

I was really excited to start this series as I loved Sarah’s Love by Numbers so much. I couldn’t wait to see what the spinoff would bring. I wasn’t at all disappointed.

I was really happy to learn that Lady Penelope would get the first book in the series. I liked her in Eleven Scandals to Start to Win a Duke’s Heart. Though I didn’t want to see her with Simon, I wanted her to find her own happily ever after. She deserved that. Bourne was an unlikely match for her in the beginning, but I loved seeing how things progressed between them. It wasn’t long before I was a total believer and couldn’t wait to see them further explore their connection, even if it all started off as something less honorable.

This was a great start to a new series. I couldn’t wait to start the next book – so I didn’t. Binge FTW! 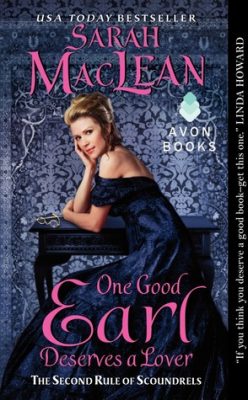 One Good Earl Deserves a Lover by Sarah MacLean
Series: Rules of Scoundrels #2
Genres: Historical Romance
Publication date: January 29, 2013
Publisher: Avon Books
Format: eBook, 373 pages
How I got it: I bought it!
Add it: Goodreads
Buy it: Amazon | Barnes & Noble | iTunes
My rating:

Lady Philippa Marbury is odd. The bespectacled, brilliant fourth daughter of the Marquess of Needham and Dolby cares more for books than balls, flora than fashion and science than the season. Nearly engaged to Lord Castleton, Pippa wants to explore the scandalous parts of London she's never seen before marriage. And she knows just who to ask: the tall, charming, quick-witted bookkeeper of The Fallen Angel, London's most notorious and coveted gaming hell, known only as Cross.

Like any good scientist, Pippa's done her research and Cross's reputation makes him perfect for her scheme. She wants science without emotion—the experience of ruination without the repercussions of ruination. And who better to provide her with the experience than this legendary man? But when this odd, unexpected female propositions Cross, it's more than tempting . . . and it will take everything he has to resist following his instincts—and giving the lady precisely what she wants.

Holy crap. This book. It was romantic, sexy and full of feels. I loved the nerdy heroine and the hero with all if his baggage. The banter was great and there was tons of both humor and heart.

Philippa is easily my favorite of Sarah’s heroines. I loved her scientific approach to life and love (and the marital bed). She was easy to connect with and like. She was nerdy and kind of strange, but I found that all extremely endearing. I loved how she pursued Cross and how direct she was with him. I love how Sarah’s female characters are a stark contrast to the ones I read in most other historical romance. They’re not afraid to pursue what they want and I appreciate that.

Cross, with his baggage and complicated past, was an unexpectedly good match for Philippa. They were more similar than they realized and I loved their banter and chemistry. The sexual tension was off the charts. Smokin’ hot. He couldn’t resist her, no matter how hard he might’ve wanted to. I love seeing a man this captivated by a woman.

I don’t really like to play favorites, but if I did… this would totally be my favorite of Sarah’s books. There was something charming and sexy and romantic about it. LOVED. 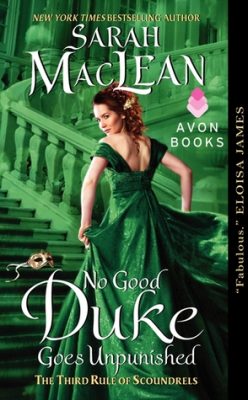 He is the Killer Duke, accused of murdering Mara Lowe on the eve of her wedding. With no memory of that fateful night, Temple has reigned over the darkest of London’s corners for twelve years, wealthy and powerful, but beyond redemption. Until one night, Mara resurfaces, offering the one thing he’s dreamed of . . . absolution.

Mara planned never to return to the world from which she’d run, but when her brother falls deep into debt at Temple’s exclusive casino, she has no choice but to offer Temple a trade that ends in her returning to society and proving to the world what only she knows . . . that he is no killer.

It’s a fine trade, until Temple realizes that the lady—and her past—are more than they seem. It will take every bit of his strength to resist the pull of this mysterious, maddening woman who seems willing to risk everything for honor . . . and to keep from putting himself on the line for love.

I LOVED Temple, Mara and their story. There’s no doubt it was complicated, what with her being thought dead and him suspected of murdering her. The web of lies and deceit went back years and I loved seeing how it all unraveled when they found themselves face to face again.

As far as heroines go, Mara was outstanding. Granted, her choices all those years ago ruined a perfectly innocent man, but you can’t really fault her for wanting to escape the situation she was in. Temple was complicated, but so freaking easy to like. For a man to have gone through the things he did, but still come out on the other side with a good heart, speaks highly of his character to begin with.

The romance in No Good Duke Goes Unpunished was great, too. I’m a big fan of second chance romances, and while theirs was tinged with years of lies and complications, I still enjoyed it. I loved their chemistry and the way it was so easy to tell how much they cared for each other.

This book was a great addition to a historical romance series I’ve fallen head over heels for. As sad as I am that there’s just one book left, I am so happy to jump into the final book and FINALLY find out Georgiana/Chase’s story. Oh it’s gonna be good! 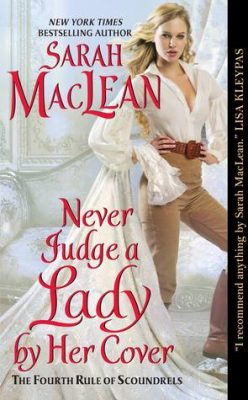 Never Judge a Lady by Her Cover by Sarah MacLean
Series: Rules of Scoundrels #4
Genres: Historical Romance
Publication date: November 25, 2014
Publisher: Avon Books
Format: eBook, 384 pages
How I got it: I bought it!
Add it: Goodreads
Buy it: Amazon | Barnes & Noble | iTunes
My rating:

She is the most powerful woman in Britain,
A queen of the London Underworld . . .
But no one can ever know.

He is the only man smart enough to uncover the truth,
Putting all she has at risk . . .
Including her heart.

The fourth book in New York Times bestselling author Sarah MacLean’s incredible Rule of Scoundrels/Fallen Angels series. These four dark heroes will steal the hearts of their heroines and the readers alike! This is the last in the Rules of Scoundrels series—Chase’s story.

By day, she is Lady Georgiana, sister to a Duke, ruined before her first season in the worst kind of scandal. But the truth is far more shocking—in London’s darkest corners, she is Chase, the mysterious, unknown founder of the city’s most legendary gaming hell. For years, her double identity has gone undiscovered . . . until now.

Brilliant, driven, handsome-as-sin Duncan West is intrigued by the beautiful, ruined woman who is somehow connected to a world of darkness and sin. He knows she is more than she seems and he vows to uncover all of Georgiana’s secrets, laying bare her past, threatening her present, and risking all she holds dear . . . including her heart.

This story was a long time in the making and I couldn’t have been more excited to begin it. Once I realized Chase’s true identity, I couldn’t wait to find out what drove Georgiana to assume this identity and become one of the most powerful “men” in London.

Duncan and Georgiana couldn’t have been more perfectly matched. The nosy scandal sheet reporter meets the woman with not one, but TWO secret identities. I just knew I was in for a great book with tons of secrets, lies and manipulations. And I was. But I also got a wonderful romance and tons of heart, too. There was a lot happening in this book and I won’t dare spoil it all for you because the way it all comes together is perfection. I couldn’t have asked for a better conclusion to this story and an answer to all my questions about Georgiana.

So, yes, I loved this book and this entire series. (And the Love by Numbers series that started it all.) The characters are complicated, but lovable in their own way. Not only are readers treated to great romance, but they can expect great character growth, too. After finishing this series, I’ve elevated Sarah to “auto-buy” status and know I can count on her to give me a great story each and every time.

Tags: 4 Star Review, 5 Star Review, A Rogue by Any Other Name, In Review, Minute Review, Never Judge a Lady by Her Cover, No Good Duke Goes Unpunished, One Good Earl Deserves a Lover, Rules of Scoundrels, Sarah MacLean