Welcome to my stop on the blog tour for Rebecca Yarros’ Beyond What is Given. I am in LOVE with Rebecca’s Flight & Glory series, so I am thrilled to be participating today. Check out my review and an excerpt below… and don’t forget to enter the giveaway! You can follow the tour by clicking on the banner above. 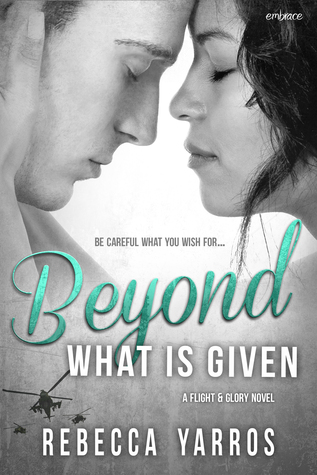 Beyond What is Given by Rebecca Yarros
Series: Flight & Glory #3
Genres: New Adult, Contemporary, Romance
Publication date: September 28, 2015
Publisher: Entangled Embrace
Format: eARC, 380 pages
How I got it: From the publisher
Add it: Goodreads
Buy it: Amazon | Barnes & Noble | iTunes
My rating:

Lt. Grayson Masters is focused on graduating the Apache helicopter course, and the last thing he needs is his gorgeous new roommate Samantha Fitzgerald distracting him. While her smart mouth and free spirit are irresistibly irritating, he can’t deny their off-the-charts chemistry, no matter how hard he tries.

Having just been expelled from college, Sam has no business digging for Grayson’s secrets while she’s hiding her own, but that doesn’t stop her from trying to tear down his walls. Each barrier she busts through drops one of her own, though, and she’s not prepared for the truth: another woman laid claim to Grayson’s heart long ago.

Falling in love is something neither Grayson nor Sam can afford, and when that line is crossed and secrets are exposed, they’ll learn that sometimes it’s the answered prayers that will put you through hell.

I always know to expect an emotional roller coaster from Rebecca’s books and Beyond What is Given was no exception. This book wrecked me and put me back together. (At least twice.) But I loved every minute.

Oooooooh boy, this book. I can’t say a whole lot without running the risk of spoiling a huge part of the plot, so I’ll tread carefully. I loved both of the characters. Grayson was amazing. He was every bit the swoony, yet complicated, man I expected to find here. He won me over early on, even with the secret he was keeping. (The secret? Broke my heart in so many ways. But I was eventually put back together.) Samantha was pretty darn great herself. She, too, had her fair share of secrets to keep but they weren’t quite of the same extent as Grayson’s. But she was fun and sassy and the pairing between her and Grayson was so perfect I was rooting for them right from the start. There’s no doubt things there were complicated as hell, but it was easy to see how perfect they were. Not only was their chemistry out of this world, but they made each other better. (And I’d be remiss if I didn’t mention the smokin’ hot sexy times because WOW. *fans self*)

I thought Beyond What is Given was a great addition to the Flight & Glory series. I loved seeing more from characters I fell in love with early in the series. I did find this book had a little more drama than the other ones, but it didn’t bother me. I was so wrapped up in the story, I’d take all of it. This book has its fair share of twists and turns and I was taken by surprise a couple times. I laughed and cried (quite a bit) but ended the book with a big smile on my face. If you like emotional and angsty (but not TOO angsty) new adult romance, this should be on your list.

I shrieked as the mixer whirred a shrill pitch and batter exploded, hitting the walls, the cabinets, my face…everything. I sputtered as some landed in my mouth, and slammed my hand against the lever to turn it off.

This was going to be a bitch to clean up.

“Are you okay?” Grayson ran in, hair damp from the shower. His eyes widened as he took in the state of his precious kitchen. “You weren’t kidding about the mess.”

“Oh this?” I smiled. “It’s a new aeration technique. I totally meant to do this.” My awesome excuse died as a glob of brownie mix fell off the tip of my nose.

“Is that so?” he asked, walking over to me slowly, consuming my vision. My breath hitched as he swiped his finger across my cheek, and then licked the brownie mix off the digit. Holy hot. “Hmm… I think there’s something to be said for this method. Maybe a little more air in the batter?”

My mouth popped open. “Are you making fun of me?”

He smirked, which must have had a direct link to my panties, because they unanimously voted to drop. Now. There was sexy, and there was Grayson’s tongue sweeping across his lower lip, which was a step beyond hedonistic. His eyes took on a mischievous glint but kept the same signature intensity that held me captive, unable to look anywhere else as he lowered his face toward mine. What…what was he doing?

Do you even care? Nope. Not one bit.

“Maybe another taste to be sure?” he asked, his voice low as his lips skimmed across my jawline. “Mmm. Definitely more.” Shivers coursed down my body. Holy shit. His mouth was actually on me, and I was awake.

He flipped the switch on the mixer and chocolate flew.

“You did not!” I let my knees buckle so I slipped to the floor, leaving Grayson to be splattered by the flying confection.

“I most certainly did!” He lifted me up like I weighed nothing, and batter smacked the back of my tank top. “Man, you’re slippery.” He mock-dropped me.

I yelped, locking my ankles around his waist and my hands around his neck. He turned off the mixer and chuckled low in his throat. “You can laugh?” I asked, yanking my head back to look at him.

“I have been known to on occasion,” he answered, that stupid, crazy-sexy smirk in play despite the chocolate on his cheeks and forehead. How the hell could someone look so hot while literally dripping brownie batter?

His smirk disappeared, and his grip tightened on my bare thighs as his gaze dropped to my lips. They parted as if he’d freaking asked them to. We weren’t just stepping out of the friend-zone here, we were on a damn missile into let- me-jump-you-ville. 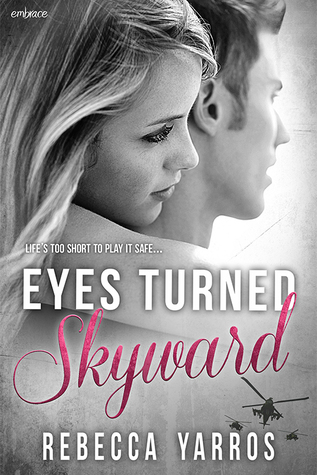 Tags: 5 Star Review, Beyond What is Given, Blog Tour, Flight & Glory, In Review, Rebecca Yarros