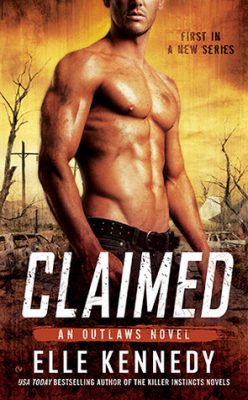 After a devastating war decimated most of the world, Hudson Lane has only known the oppressive life under her own father’s tyranny. She finally escapes, branding herself an outlaw and hunted by the Enforcers. Her best chance at survival is Connor Mackenzie, an aggressively sensual fugitive who opens her eyes to the wicked possibilities of a world without rules.

As the leader of a band of outlaw fighters, Connor can’t resist the beautiful stranger who asks for his protection. Despite his reservations, he agrees to introduce her to a whole new way of life. But when Connor discovers Hudson’s connection to the enemies of liberty, he wonders how far he can trust the woman who has abandoned all inhibitions to challenge every forbidden desire.

Guys. This book. It’s not something that’s for EVERYONE. I realize that. But I loved it. It was edgy and dirty and totally consumed me until I finished it. I had to stop and do real life things about halfway through and I wanted to throw a temper tantrum because I was so anxious to get back to it. I cannot WAIT for the next book.

I read a lot of romance and it honestly takes a lot for me to be rendered speechless. Claimed? Totally did it. I sent I don’t even know how many OMG freak out texts to my friend while I was reading it. This book is so much more than just sexy as hell romance, but I’d be lying if I didn’t admit that’s a bit part of why I loved it as much as I did. This is the first adult dystopian that I’ve read, so I wasn’t expecting for sex to play such a huge part it in because, well, it doesn’t in the YA books I’ve read. (I mean, duh.) But, in this world where sex is both a form of trade and one of the last true indulgences, it was important. Things that are considered taboo in our world definitely weren’t in the one that Elle built in this book.

I loved the characters and found myself squarely in their corners and desperately wanting to know more about them. Connor. Gah. That man, with his possessive, controlling tendencies and his dirty mouth and complicated past? Good god. I loved him. Hudson was a great female lead. I admired her strength in trying to escape her former life and the expectations that came with it. The other men in Connor’s group were fantastic, too. I can’t wait to get more of each of their stories.

This book was utterly captivating. I loved the action and the setup for the romance. I loved the dirty hot times and the way the story progressed both with regards to the romantic and non-romantic plots. If this sounds like it might be your type of book, don’t wait. Pick it up now. You won’t be sorry.

Did I mention I loved this and can’t wait to get my hot little hands on the next book? Because, yeah. Damn.

4 responses to “In Review: Claimed (Outlaws #1) by Elle Kennedy”