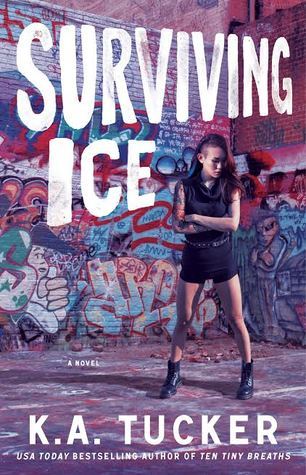 Ivy Lee, a talented tattoo artist who spent the early part of her twenties on the move, is looking for a place to call home. She thinks she might have finally found it working in her uncle’s tattoo shop in San Francisco. But all that changes when a robbery turns deadly, compelling her to pack up her things yet again.

When they need the best, they call him. That’s why Sebastian Riker is back in California, cleaning up the mess made after a tattoo shop owner with a penchant for blackmail got himself shot. But it’s impossible to get the answers he needs from a dead body, leaving him to look elsewhere. Namely, to the twenty-something-year-old niece who believes this was a random attack. Who needs to keep believing that until Sebastian finds what he’s searching for.

Ivy has one foot out of San Francisco when a chance encounter with a stranger stalls her departure. She’s always been drawn to intense men, so it’s no wonder that she now finds a reason to stay after all, quickly intoxicated by his dark smile, his intimidating strength, and his quiet control.

That is, until Ivy discovers that their encounter was no accident—and that their attraction could be her undoing.

Surviving Ice was of the “read in one sitting” variety for me. It grabbed me right from the very start and there wasn’t a chance I was stopping until I finished it. I loved Ivy and Sebastian both, so I was as gripped by their chemistry – and eventually the romance – as I was the suspense.

Ivy was a great, strong female lead and I admired the way she was handling everything surrounding the death of her uncle. A lesser woman would’ve broken, but she remained strong. She intrigued me in Chasing River, so I was thrilled to learn the final book in the series would be hers. Sebastian was a fantastic male lead. I loved that we got to spend roughly half the book inside his head. (Dual POV, when done right, are my favorite.) He was keeping plenty of secrets and could’ve been quite dangerous to Ivy, but I still liked him. And I LOVED the sexual tension between him and Ivy.

It was impossible not to find Ivy and Sebastian a perfect match. They complemented each other so well. They were both strong and independent. Their chemistry was smokin’ hot right from their very first meeting. I couldn’t wait to see how the story between them progressed as secrets were revealed. Oh, and it’s worth mentioning their chemistry at the beginning and the resulting sexual tension gave way to some SERIOUSLY HOT sexy times. I was definitely fanning myself.

Surviving Ice wasn’t an “edge of your seat” type of suspense book, but I liked that part of the storyline. I was so sad for Ivy and her loss and I was legitimately concerned about how much she knew and what danger that knowledge would land her in. I NEEDED to know how things would turn out and that’s definitely part of what kept me obsessed with finishing this book – in a matter of just a few hours. The other parts, of course, was the characters and the kissing. 🙂

Man, I hate to see this series come to an end, but I’m glad it wrapped up the way it did. I had pretty high expectations for this final book and it exceeded all of them. I thought it was a great way to finish up this series and, though I’m sad it’s over and that I have to give these characters up for now, I can’t wait to see what Kathleen gives us next.