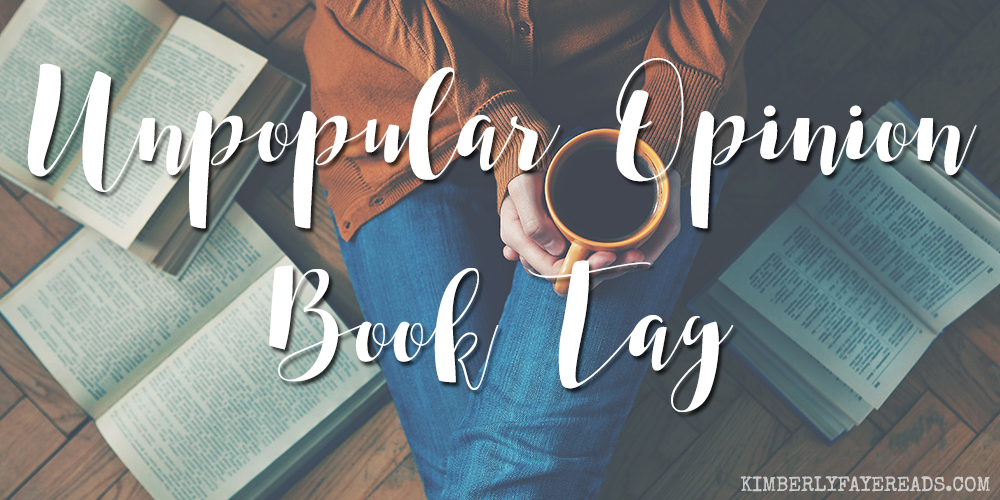 I was tagged by Stephanie from No BS Book Reviews to do the Unpopular Opinion Book Tag! It looks fun, so I said what the hell. No judgments or hard feelings if I hate on a book you love! I might be brutal. I’m in that mood. 😉

I actually hate to admit this. The author is so sweet, but I just couldn’t get into this book. I truthfully think it’s because I was listening to the audiobook and it wasn’t very good. I might do better if I read it another way, but I’ll probably not ever find out. (Sorry!)

A Book Series That Everyone Hates, But You Love

Ok, not EVERYONE hates it and I don’t LOVE it, but it’s probably one of the more polarizing series out there. What I will say is that it introduced me to a whole new genre after I’d grown bored with reading YA and “chick lit” and I loved it at the time. And I appreciate it for opening up new bookish worlds to me.

A Love Triangle Where the MC Ended Up With A Person You Didn’t Want Them To End Up With, Or An OTP You Didn’t Like

I hate doing this, because I loved this series and I adore the author, but this book pissed. me. off. (Spoiler alert: how do you introduce a love triangle in the final book?! UGH.) I hadn’t been this angry at a book since Allegiant.

A Popular Book Genre You Rarely Reach For

Young adult fantasy. I know. I’m a horrible person. It’s not so much that I don’t enjoy them. It’s more that I suck at series. I have commitment issues and I LOATHE cliffhangers and waiting for the sequels. If you can name a couple awesome STANDALONE YA fantasy, I’d probably be all over it.

The only one that comes to mind is Ginny Weasley from the Harry Potter novels. She rubbed me the wrong way and I can’t even really point to one reason why. She just did. And maybe I didn’t dislike her as much as I disliked the idea of her and Harry together. (And no, I did not ship Harry and Hermione. Ew.) She bugged me.

A Popular Author You Can’t Seem To Get Into

Full confession: I LOVE LOVE LOVED this book (and hated myself for it) when I first read it a couple years ago. It was one of the first new adult books I read and I was obsessed. Yes, Travis was a manwhore asshole disaster, but I liked his growth. I was enthralled by the story. I laughed and cried. I lost sleep. Fast forward to the following novels in the series. I found my love rapidly declining. A Beautiful Wedding nearly ruined my love for the first book. Beautiful Oblivion was when I reached the end of my rope with it though. I hated that book. Of course, this was about the time some of the “author behaving badly” stuff started, too and I cut my losses. I know people love her books. I don’t. I did – and I do try to look fondly back on the first one – but I’m also pretty sure if I were to reread it today, I wouldn’t feel the same way.

Ok, so I don’t know if it’s a trope as much as it’s something I just see far too frequently in books and it makes me want to throw things across the room. I can’t lie – I need/want/have to have romance in books. It’s often the romance that makes or breaks a book for me. I mean, yeah, the story is important too, but if I can’t behind the romance or if someone does dumb shit, I’m over it. Well, I’ve seen a run on guys especially doing dumb shit in books lately. The one that sets me on edge every time (and often makes me drop a book) is the “like her but can’t have her because reasons, so I’ll screw anything in a skirt to get over her before ultimately working out the reasons and winding up together.” It happens frequently in friends-to-lovers stories, which is one of my favorite tropes.

UGH. Am I the only one who gets so angry over this? Let’s have bookish guys stop doing douchey things and girls forgiving them immediately, k?

A Popular Series You Have No Interest In Reading

Don’t hate me, friends. It’s not so much that I don’t have any interest in reading this series, it’s that I know I don’t have the time to do it. I’m sure it’s wonderful. I’ve heard great things about the story. But, again, commitment issues. Maybe if I didn’t blog? I dunno. I own them all (thanks to that awesome Amazon sale/mistake) but I don’t see me reading them anytime soon. Or, likely ever.

The Saying Goes “THE BOOK IS ALWAYS BETTER THAN THE MOVIE,” But What Movie/Show Adaptation Do You Prefer More Than The Book

Though I gave up on this book series (and stopped watching the TV one as well), there’s no denying the latter was better. Maybe it’s because of Ian Somerhalder. Maybe not. Either way…

I’m not going to tag anyone specific, but if you see this and you’re interested I hope you’ll do it. Then come back and leave your link in the comments!