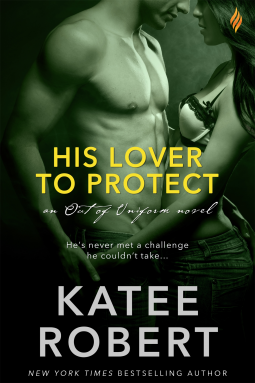 His Lover to Protect by Katee Robert
Series: Out of Uniform #3
Genres: Adult, Contemporary, Romance
Publication date: September 7, 2015
Publisher: Entangled Brazen
Format: eARC, 152 pages
How I got it: From the publisher
Add it: Goodreads
Buy it: Amazon | Barnes & Noble | iTunes
My rating:

Alexis Yeung did everything right....only to watch everything go horribly, horribly wrong. Broken and angry, Alexis high-tails it to Europe, determined to face the world on her own terms and without consequence. Which includes a mind-blowing night with a sexy, scarred stranger.

Except, embittered former pararescuer Luke Jackson isn't exactly a stranger. He's supposed to keep an eye on Alexis without her knowing. Ending up in bed together was definitely not the plan. Now he's chasing her (admittedly hot) ass across Europe, a game of cat and mouse that always ends with the two of them tangled up in the sheets.

Something in their scarred, damaged souls calls to each other. And God help them, the sex in unbelievably hot. But if Alexis discovers who Luke really is, he'll lose the one thing that makes him feel whole...

Katee Robert’s Out of Uniform series has quickly become one of my favorite from the Brazen imprint. I love that it’s both sexy as hell and has quite a bit of depth. Anytime I can get my feels and my dirty talkers in one place, I’m a happy camper. Or reader. Whatever. 🙂

Alexis definitely piqued my interest during Falling for His Best Friend. She’s dealt with a lot of things in her life – loss of her mother, cancer and her inability to have children and the fact that her sister is now pregnant. I really hoped she would get a book (and a HEA). She deserved it. Since she left home in the previous book, she’s been traveling the world trying to find herself and come to terms with some of the more painful parts of her past. Little does she know that her friend Ryan has sent Luke to follow her and make sure she’s safe. Of course, this little lack of info sharing will come to cause some drama later in the book, but it’s pretty low and relatively angst-free.

I can’t think of a more perfect match for Alexis than Luke. He was strong and sexy, protective and vulnerable. He pushed her. He was a little rough around the edges, but his heart was in the right place. He, too, was dealing with some issues from his own past and was as broken as Alexis. This is one of the reasons I think they were so well matched. It was easy to root for both of them to come to terms with their pasts and the impact it had on their futures, all while watching them try to find something real together. They shared a passion that extended outside of the bedroom and often led to some pretty fiery exchanges. It’s all part of what made them THEM.

I thoroughly enjoyed this book. It was a great addition to the Out of Uniform series and just the story I wanted for Alexis. It was hot and emotional – a combination I happen to love. I felt the feels and was completely engaged with the story. It was just wonderful. If you like your sexy books with a side of feels, you need to be reading this series.

Tags: 5 Star Review, His Lover to Protect, In Review, Katee Robert, Out of Uniform