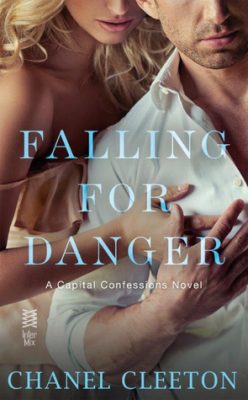 The author of Flirting with Scandal presents her third book in a sexy contemporary romance series about three sisters in a powerful political family, the scandals that threaten to destroy them, and the passion that drives them…

Kate Reynolds has just graduated from college and is determined to make it on her own. Her job as a junior political analyst at the CIA is a dream come true and the perfect opportunity to find answers about the night that’s plagued her for four years—the night she lost her fiancé, Matt, on a Special Forces mission in Afghanistan. Kate’s consumed with uncovering the truth and avenging the man she loved and lost, even if it means risking her own life to prove that his death wasn’t an accident.

When she gets too close to discovering what happened that fateful night and danger arrives on her doorstep, Kate’s stunned by the man who comes to her rescue. Together, they begin to dig for the truth, fighting to stay alive as they’re dragged down into a world of secrets and lies. But when the threat hits close to home, Kate must choose between vengeance and a future with the man who’s ignited a fire inside her that she thought died long ago.

I don’t even know what to say about this book to do it justice without ruining it and the series. So, to keep my review spoiler-free (as it should be!) this is going to be a short (and pretty vague) review.

As you know if you read my review for Playing with Trouble, there was a teaser for Falling for Danger that left me gasping for air. It was a total game changer. Until I read that teaser, I really didn’t have any idea what to expect from Kate’s story. I was floored. Jaw on the ground floored. I couldn’t wait to get my hands on this book. And believe me when I say I dumped EVERYTHING to read it the day I got access to an ARC. Falling for Danger was everything I wanted and more. There was more action in this book than in the previous ones. I was quite literally on the edge of my seat at times, hoping everything would be ok for Kate and her leading man. I hoped she would find the answers she needed and the happily ever after she deserved. She got all of that and more in this action packed and emotional conclusion to the Capital Confessions series. Believe me when I say I was feeling all the feels.

I’ve been obsessed with this series since before I even picked up the first book. Once I read it, there was no going back. It was like Chanel wrote this series specifically with me in mind. Scandal, mystery, politics, DC, SUPER sexy romance… I seriously couldn’t ask for more. Falling for Danger was the perfect end to this series. All the loose ends with cleared up and I achieved the answers and closure I needed to say goodbye to these characters. (As sad as that makes me.) What I loved most, however, is that Chanel didn’t try to give it a picture perfect ending. It was somewhat bittersweet – and not just because I’m saying goodbye to characters I love. But, I truly believe anything else would’ve felt untrue. I loved it just how it is. Now, that’s not to say I wouldn’t love a follow-up novella at some point… but I’m a greedy reader who hates saying goodbye to characters that have touched me in some way.