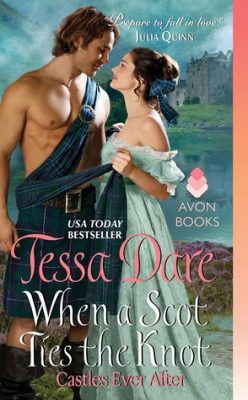 When a Scot Ties the Knot by Tessa Dare
Series: Castles Ever After #3
Genres: Historical Romance
Publication date: August 25, 2015
Publisher: Avon Books
Format: eARC, 384 pages
How I got it: Edelweiss
Add it: Goodreads
Buy it: Amazon | Barnes & Noble | iTunes
My rating:

On the cusp of her first London season, Miss Madeline Gracechurch was shyly pretty and talented with a drawing pencil, but hopelessly awkward with gentlemen. She was certain to be a dismal failure on the London marriage mart. So Maddie did what generations of shy, awkward young ladies have done: she invented a sweetheart.

A Scottish sweetheart. One who was handsome and honorable and devoted to her, but conveniently never around. Maddie poured her heart into writing the imaginary Captain MacKenzie letter after letter … and by pretending to be devastated when he was (not really) killed in battle, she managed to avoid the pressures of London society entirely.

Until years later, when this kilted Highland lover of her imaginings shows up in the flesh. The real Captain Logan MacKenzie arrives on her doorstep—handsome as anything, but not entirely honorable. He’s wounded, jaded, in possession of her letters… and ready to make good on every promise Maddie never expected to keep.

Tessa Dare gave me my first taste of the awesomeness that is historical romance, so she and her books will always hold a special place in my heart. I absolutely adored the first two books in the Castles Ever After series – Romancing the Duke and Say Yes to the Marquess. It was actually because of THIS BOOK that I decided to give historical romance a try at all, though. (Thank you Edelweiss and Avon Books.) I was intrigued by the blurb (and the cover) and didn’t want to read the series out of order, so I snagged the first two books from Amazon. I’m so glad I did, too. Tessa’s books are lighthearted, romantic, sexy as can be and funny. They’re such a joy to read.

When a Scot Ties the Knot drew me in from the very first page with the letters to the (then) fictional Captain MacKenzie. I loved Maddie’s voice and her humor. The letters were the perfect way to set the stage for a wonderful story. When the real Captain Logan MacKenzie arrives, I knew Maggie had met her match. I loved their banter and their more serious moments. The sexy times were hot and swoony. Maggie and Logan were golden together. I enjoyed reading as they got to know each other, faced down issues from their own pasts and forged ahead, together.

I read When a Scot Ties the Knot in one sitting and quickly added to to my list of books to reread sometime soon. Since it’s available in audio, I think I’ll do it that way. It could be a fun audiobook. No matter how I decide to go about it, I’m sure this will be a book I read over and over again going forward. It was just that much fun to read the first time.

Tessa Dare is the New York Times and USA Today bestselling author of twelve historical romance novels and four novellas. Her books have won numerous accolades, including Romance Writers of America’s prestigious RITA® award and multiple RT Book Reviews Reviewer’s Choice Awards. Booklist magazine named her one of the “new stars of historical romance," and her books have been contracted for translation in a dozen languages.

A librarian by training and a booklover at heart, Tessa makes her home in Southern California, where she lives with her husband, their two children, and a pair of cosmic kitties.

Tags: 5 Star Review, Castles Ever After, In Review, Tessa Dare, When a Scot Ties the Knot

3 responses to “In Review: When a Scot Ties the Knot (Castles Ever After #3) by Tessa Dare”