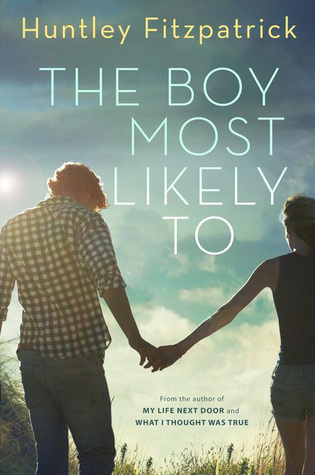 The Boy Most Likely To by Huntley Fitzpatrick
Genres: Young Adult, Contemporary
Publication date: August 18, 2015
Publisher: Dial Books
Format: eARC, 432 pages
How I got it: From the publisher
Add it: Goodreads
Buy it: Amazon | Barnes & Noble | iTunes
My rating:

Tim Mason was The Boy Most Likely To find the liquor cabinet blindfolded, need a liver transplant, and drive his car into a house.

Alice Garrett was The Girl Most Likely To . . . well, not date her little brother’s baggage-burdened best friend, for starters.

For Tim, it wouldn’t be smart to fall for Alice. For Alice, nothing could be scarier than falling for Tim. But Tim has never been known for making the smart choice, and Alice is starting to wonder if the “smart” choice is always the right one. When these two crash into each other, they crash hard.

Then the unexpected consequences of Tim’s wild days come back to shock him. He finds himself in a situation that isn’t all it appears to be, that he never could have predicted . . . but maybe should have.

And Alice is caught in the middle.

I… am really not even sure what to say about this book. I had high expectations for it because of how much I LOVED My Life Next Door. Tim was a complicated guy in that book, but I ultimately liked him. I wanted to see him get a chance to pull his shit together. I got that chance with this book, but it wasn’t at all what I thought it would be. It was angsty and emotional and, honestly, not all that happy most of the time. Both Alice and Tim were dealing with a bunch of messy things. I loved watching things develop between them, though. I just wish there had maybe been a little more romance? I don’t know. I’m conflicted. I had feels but they weren’t the ones I thought I would have.

If I’m honest, I found The Boy Most Likely To overwhelming. I knew Tim had a lot of growing up to do, but after awhile I was ready to yell “Oh come on. Another thing?” as more and more got piled on top of him. The book starts with an ultimatum from his father and then he’s tested in nearly every way possible until the end. It’s not all bad though, even though while I was in it, I felt like it was. Tim comes into his own in this book. So very much so. He’ll never be perfect, but I was moved by how much he’d grown up. He also comes out of it with something very real and unlike anything he’s ever had before, with Alice. So, maybe it wasn’t happy but it was hopeful?

Alice was a tough cookie in My Life Next Door, so I wasn’t really sure how I’d feel about her while reading this book. I quickly grew to have a whole new appreciation for all the things she was doing for herself and her family. She really was the rock, the second mother, to her clan. And all that while trying to better herself and follow her own dreams. Her past wasn’t quite as colorful as Tim’s, but she definitely never had luck in love. Until now, perhaps?

One thing that can’t be denied is just how much I flipping love the Garretts. They are, without a doubt, one of my favorite families in books. They each have such strong personalities and I was grateful for them providing much needed comic relief (and straight up heartwarming) moments during this book. I love Patsy. She’s about the cutest little thing ever, Hon. (Squees.) Their family might be large and complicated, at times, but they’ve got each other and that’s pretty damn perfect. I loved how they welcomed Tim into the fold, too. With them in his corner, he was bound to come out on top.

It wasn’t that I didn’t like the book. It’s just that it wasn’t what I thought it would be. It was still beautifully-written and did have some great sweet, funny and emotional moments amongst the more serious ones. There was tons of character growth for both Tim and Alice. The romance that was there was sweet and real. I’m rounding this up to 4 stars from the 3.5 I want to give it because I think it’s better than a 3 star read, even if it isn’t the book I thought I’d be reading.

Huntley Fitzpatrick grew up dreamy and distracted in coastal Connecticut. She flourished in a family of bookworms where everyone always had their nose in a book. She kept an exhaustively thorough journal which frightened her boyfriends but has proved very useful in her career as a writer. Her debut contemporary Romance, MY LIFE NEXT DOOR, was published in June of 2012 by Penguin-Dial for Young Readers. Now she laughs with and eavesdrops on her six children who provide her with perspective and material. She is represented by the amazing Christina Hogrebe of the Jane Rotrosen Agency.

Tags: 4 Star Review, Huntley Fitzpatrick, In Review, The Boy Most Likely To