Welcome to my stop on the blog tour for Lia Riley’s Right Wrong Guy! If you’re a fan of adult contemporary romance, look no further. This’ll be your next favorite read. 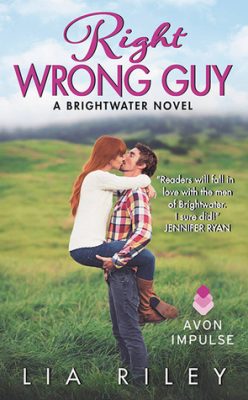 Bad boy wrangler, Archer Kane, lives fast and loose. Words like responsibility and commitment send him running in the opposite direction. Until a wild Vegas weekend puts him on a collision course with Eden Bankcroft-Kew, a New York heiress running away from her blackmailing fiancé…the morning of her wedding.

Eden has never understood the big attraction to cowboys. Give her a guy in a tailored suit any day of the week. But now all she can think about is Mr. Rugged Handsome, six-feet of sinfully sexy country charm with a pair of green eyes that keeps her tossing and turning all night long.

Archer might be the wrong guy for a woman like her, but she's not right in thinking he'll walk away without fighting for her heart. And maybe, just maybe, two wrongs can make a right.

I more or less fell in love with the fictional setting of Brightwater – and its residents – after reading about one chapter of Last First Kiss. I love a good small town romance and Lia gives us that and more with this series.

So, if you’ve read any of my reviews, you know (especially lately) I have a love/hate relationship with manwhores of any status. I mean, as long as they’re not sleeping around while they’re *WITH* someone, I can usually handle it. But, sometimes I get inside my head too much and have a tough time if they’ve done something off-putting. I was a little nervous about Archer’s book because of his well-deserved reputation. They say a leopard doesn’t change its spots, but can Archer change for a good woman? (Spoiler alert: YES. And it’s wonderful.) Before I’d even reached the end of the book, I was singing his Archer’s praises and putting him on my swooniest of the book boys list.

So, while it took a little while for Archer to prove himself and grow on me, I pretty much adored Edie from the very start. Or, I guess I should say she first got my sympathy and I couldn’t wait to see her come into her own. And boy, does she ever. I loved how much this lady grew throughout the course of the book. She started off a little too doormat-esque and lacked self-confidence. Not long after she got to Brightwater, however, she started to become more assertive and more comfortable in her own skin. I loved watching her transformation.

Right Wrong Guy was a great addition to the Brightwater series. I enjoyed getting more from Annie and Sawyer – and crazy Grandma, of course. Can’t forget about her! The romance was sweet, sexy and swoony and I really did come to love the characters. Now I’m anxious for Wilder’s story in Best Worst Mistake!

Whatever. Archer had it good, made great tips as a wrangler at a dude ranch. His middle brother took life seriously enough and he hadn’t seen his oldest one in years. Wilder worked as a smoke jumper in Montana. Sometimes Archer wondered what would happen if he cruised to Big Sky Country and paid him a surprise visit—maybe he had multiple sister wives or was a secret war lord.

Growing up after their parents died in a freak house fire, they all slipped into roles. Wilder withdrew, brooding and angry, Sawyer became Mr. Nice Guy, always the teacher’s pet or offering to do chores. Archer rounded things out by going for laughs and practical jokes and causing trouble because someone had to remind everyone else not to take life so seriously. None of them were getting out alive.

He kept marching down the flights of stairs, tucking in his shirt. Grandma’s words played on a loop in his mind. “Using women like disposable silverware.”

Lord knew—those women used him right back. It was fun, didn’t mean anything.

He ground his jaw so tight his teeth hurt. Casual sex on pool tables, washing machines, countertops, and lawn chairs filled his physical needs, but these random hookups were starting to make him feel more and more alone.

On the ground floor, he slammed open the stairwell door. There were two corridors ahead. He turned left for no reason other than that’s the hand he favored. Seemed like he chose wisely because a side entrance gave him a quick exit. He walked out, wincing at the morning sun even as he gulped fresh air, fresh for the Vegas Strip, but a far cry from the Eastern Sierras’s clean mountain breeze. His heart stirred. He’d have some breakfast and hit the road. As much as he liked leaving Brightwater, he always missed home.

Archer reached to adjust his hat and grabbed a handful of wet hair instead. Twelve stories above, a stripping magician had found herself a mighty fine Stetson.

He stepped onto the street, jumping back on the curb when a city bus turned, the side plastered with a shoe ad sporting the slogan, “Can You Run Forever?”

Hell, he’d been running from accountability, stability, and boring routines his whole life.

Another thought crept in and sank its roots deep. Was he really running from those things, or was he letting his fears of commitment and responsibility run him instead?