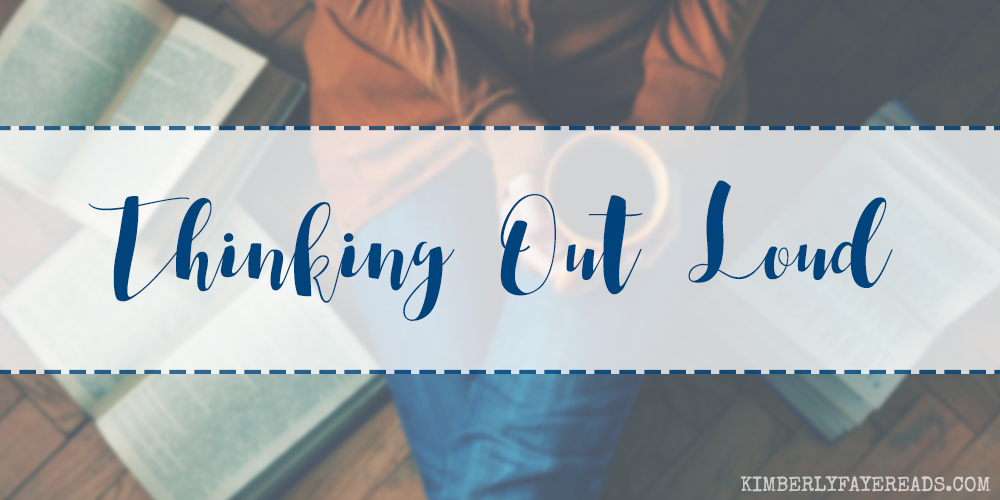 Thinking Out Loud is my version of a discussion post and/or a place to just get things out of my head and off my chest. I have no plans for it to be a weekly feature, but more of a space that’s here when I have something to say.

I think organization is one of the biggest struggles I’ve had since starting my blog. And I’m a total type-A, planner-brain person by nature. It just gets overwhelming. I know I’m not alone here. It’s a topic I see brought up over and over and over again. Everyone has their own system. (Or, um, if they’re like me, they have three…) I’ve read roughly 1,000 posts about blog organization and tried several ways before ultimately abandoning them because they didn’t work for me. But, I think I’ve finally come up with the perfect (three-pronged) system (for me) and I thought I’d share that today.

Shortly after I first started blogging, I decided to utilize the Google calendar connected to my blog email account. At one point I had a separate calendar for release dates for ARCs, but I quickly got tired of updating that. It just wasn’t doing it for me. I still use my Google calendar (obsessively) but the way I use it is a little different than when I first started. 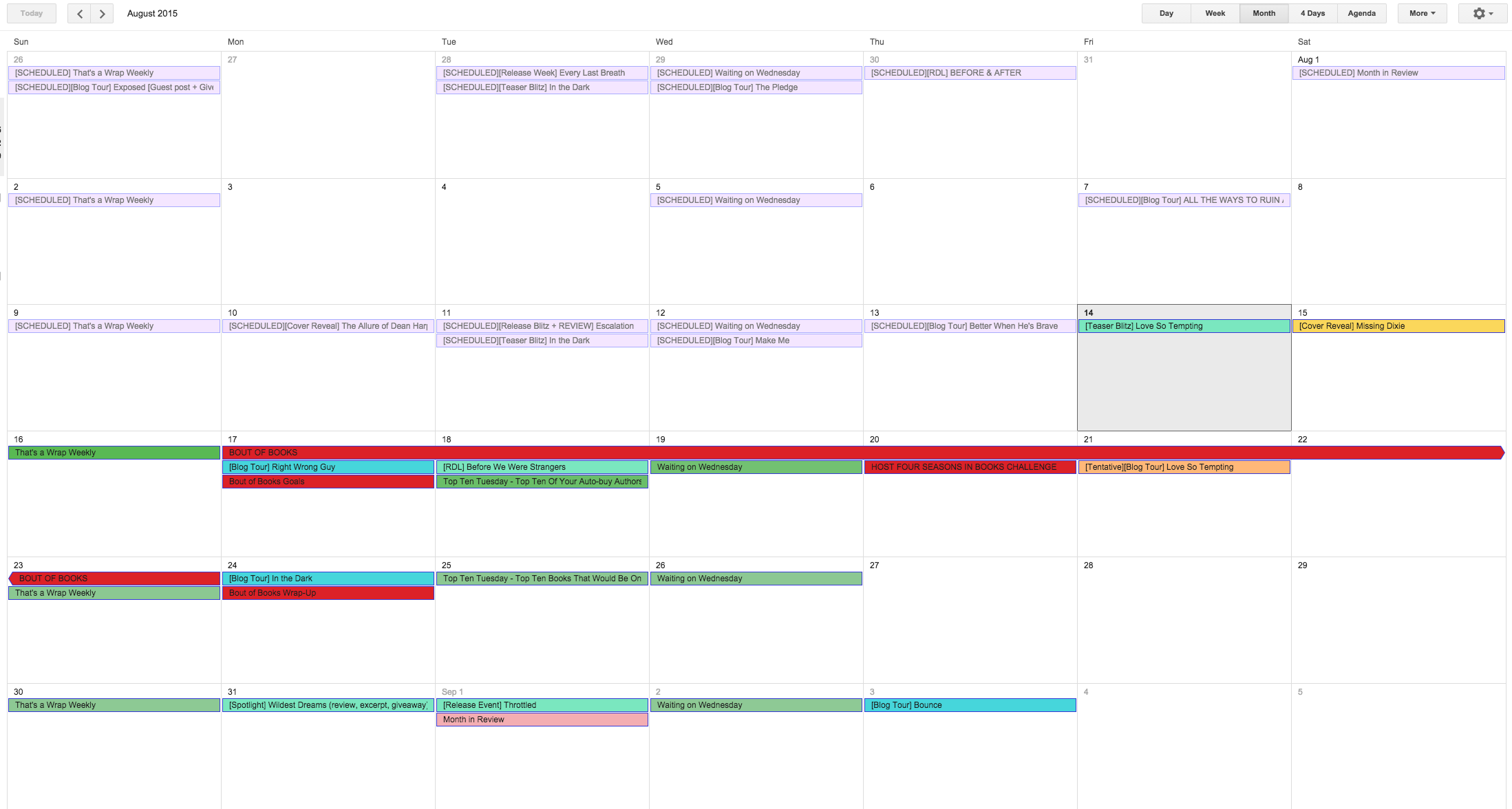 Now I use my calendar solely to keep track of when I have posts to … post. It’s color-coded and once I’ve scheduled a post, I add [SCHEDULED] to the beginning of it and change the color. (You can also see I’m pretty terrible at blogging ahead. I’m trying to work on that.) If there are read-a-thons or real life events going on, I add those to my calendar because they become something that can potentially get in the way of blogging and I want to be aware before I commit to posting. I also put the two weekly memes I do on here. I do NOT put non-tour, non-deadline specific reviews on the calendar though. It was too overwhelming to try to schedule in advance when I would post all my reviews. So, I leave those off the calendar and just try to have one review posted each day. (Side note: I typically spend part of my weekend writing and scheduling reviews for the upcoming week. I suck at writing reviews during the work week.)

The second part of my approach at organization is a new one for me, but one I’ve seen around in SO MANY different formats since I started really paying attention to the different ways people organize their blogging life. I played around with a couple different versions – including the publisher and imprint, for example – but ultimately decided this is what works best for me. It gives me all the info I need to see the books I need to read and review.

I decided to do this in Google docs so that I can access it from anywhere AND so I can share it if anyone is interested. (You can grab a fresh copy here. Use it. Share it. Love it.) Nothing is locked so you can make any changes you’d like. But, it’s a good starting point if nothing else. There are dropdown boxes for several of the columns (which you can edit by highlighting the whole column and right-clicking data validation) and it’s sortable, searchable and includes the conditional formatting you see in the screenshot below. Which means the Read and Reviewed columns will turn green when you type YES (or select it from the dropdown menu) and red if you type or select NO. I also added some conditional formatting to the Rating column so if you mark a book DNF, the cell will turn red. But “what are the gold cells?” you might ask. Those are books released before the current date. You’ll see many of them are marked as read and reviewed on my sheet, so they’re not necessarily overdue, but they have already been released. (All of this conditional formatting is easy to change by highlighting the column in question and right-clicking conditional formatting.) This is just what worked for me.

In theory, I’ll use this spreadsheet to determine whether or not I have the capacity to accept (or request) another book for review… But I also know I have a tendency to overbook myself, sooooo… More than anything, this spreadsheet is just to keep track of the ARCs I have. (Goodreads just wasn’t cutting it.)

Through this whole process, I realized that sometimes I put far too much pressure on myself. As much as I’d love to be that person who is always able to read each book weeks or months before it’s released and have their review posted well in advance of release, I’m not going to be that person. I’ve accepted that. But, I also know I can do better without turning blogging into something that’s more of a chore than a joy and taking the fun out of reading. That’s all I’m trying to do here. 🙂

The third prong of my organization approach is my most visual, in my face one. It’s also probably the geekiest one. I adapted it from the project management theory my department uses at work. You can read more about the true Kanban theory here, if you’re interested. I won’t bore you though. 😉 Overly simplified, it’s a visual, transparent way to organize your projects. It’s supposed to ensure you are never overloaded with projects in any one stage of development because you only start a new phase when you have capacity to do so. I’ve found that it worked so well at the office that I would tweak it a little (and take off some of the restrictions and limitations a true Kanban board would have) and use it for my books. 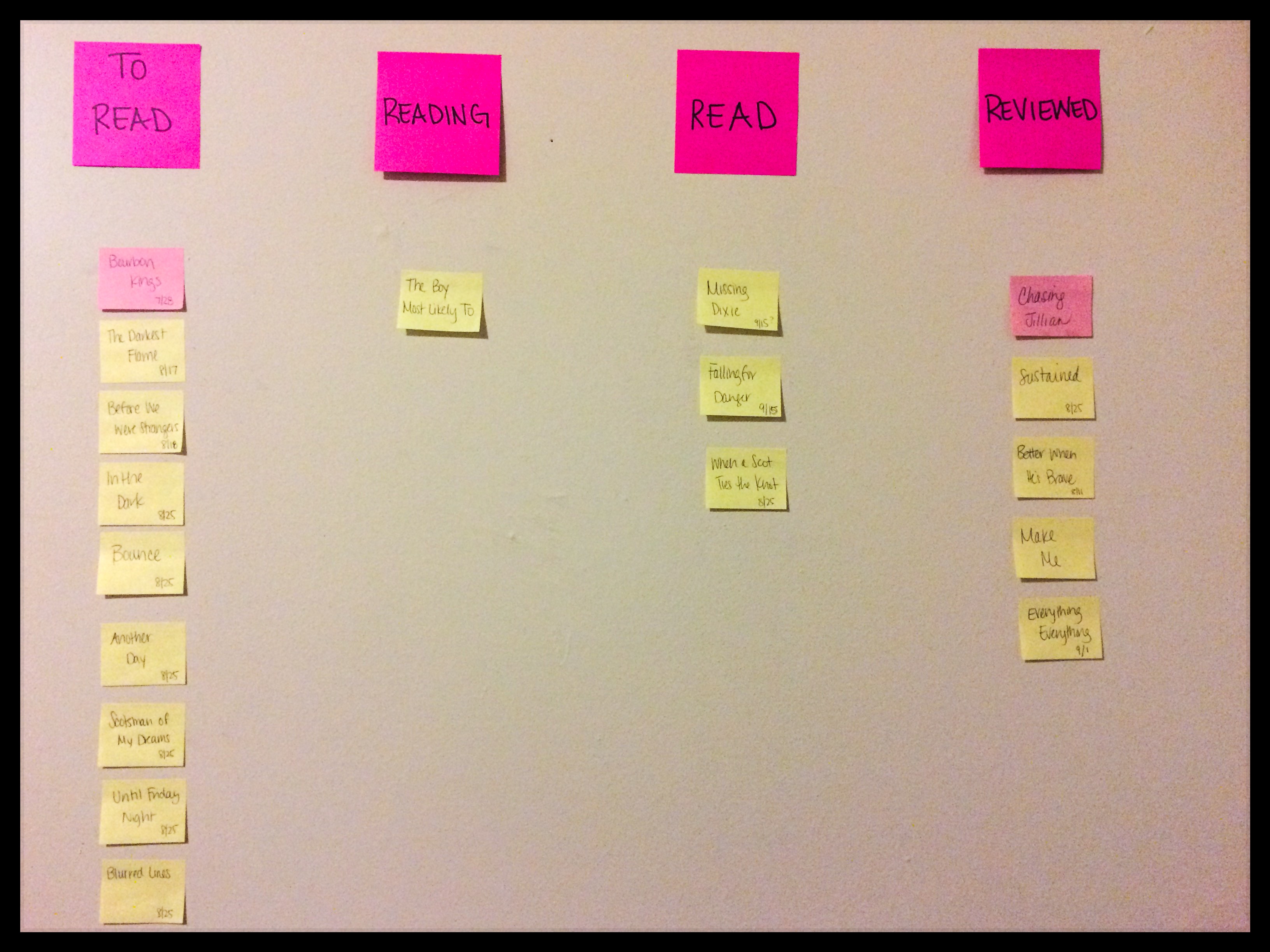 So, yeah… this is on the wall in my dining room/office. (Perks of living alone! Huzzah!) It’s around the cover so it’s not on a hugely prominent wall, but it’s as close to being “in my face” as I’ll get. It’s not pretty. It’s basic. But damn do I love moving post it notes from column to column. You’ll note not EVERYTHING from the ARC spreadsheet has made it onto the wall. That wouldn’t be helpful. What it would do is cause me to sit in the corner in the fetal position and rock back and forth from being overwhelmed. The books on this wall are the ones I hope/plan/intend to read soon. (Oh, and the light pink Post Its are for the already released titles.) 😉

The main thing this “Kanbanish” wall does is (help) keep me from reading tons and tons and tons of books and not writing reviews. Even looking at it in this photo I’m like “must … write … reviews …” even though the books are mostly ones that aren’t coming out for several weeks. So maybe I’ll get on that next.

Thanks for listening to my ramble about organization. I told you I was totally type A. In Myers Briggs I’m an ESTJ. Trust me when I say I’ve earned that J. But maybe we’ll do more about that later.

How do you stay organized? Have you found one single method that works for you? Do you love my spreadsheet and intend to start keeping one for yourself? Tell me. Show me. I’m all ears. 🙂 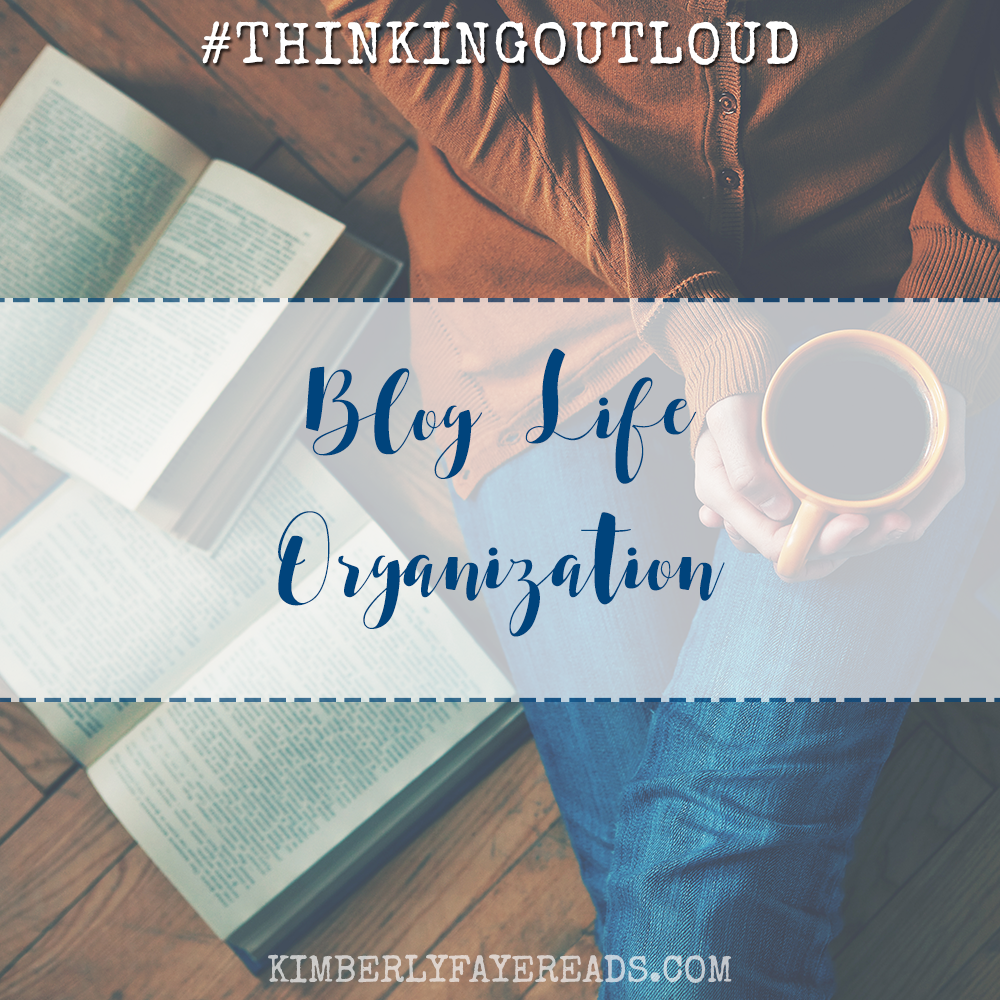