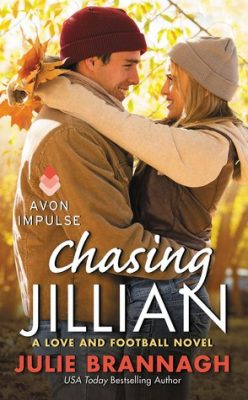 Jillian Miller likes her job working in the front office for the Seattle Sharks, but lately being surrounded by a constant parade of perfection only seems to make her own imperfections all the more obvious. She needs a change, which takes her into foreign territory: the Sharks' workout facility after hours. The last thing she expects is a hot, grumbly god among men to be there as witness.

Star linebacker Seth Taylor has had a bad day—well, a series of them recently. When he hits the Sharks' gym to work out his frustration, he's startled to find someone there—and even more surprised that it's Jillian, the team owner's administrative assistant. When he learns of her mission to revamp her lifestyle, he finds himself volunteering to help. Something about Jillian's beautiful smile and quick wit makes him want to stick around. She may not be like the swimsuit models he usually has on his arm, but the more time Seth spends with her, the harder he falls.

And as Jillian discovers that the new her is about so much more than she sees in the mirror, can she discover that happiness and love are oh-so-much better than perfect?

I love romance and I’m a football fanatic, so it’s no wonder I enjoy Julie Brannagh’s Love and Football series as much as I do. It’s been awhile since I picked up one of these books and I have to kick myself for that. (I also need to catch up on the two books I’ve inexplicably skipped.)

Jillian was a great character. It was easy for me to relate to her and her insecurities and issues with her body. But she was so much more than just her body type. She was smart, compassionate and driven. I loved that she used a painful part of her own past as a motivator for volunteering to help kids who were like her. She was a good person. She was a little shy and awkward socially, but she was trying to improve herself. I know part of this book was about her transformation – physically and mentally, but I thought at times there was a little too much focus put on the physical. (One of those moments being when a HUGE deal was made about her walking a 5K after losing quite a bit of weight. It made her sound as though she was previously morbidly obese and housebound, instead of an otherwise healthy woman who just carried some extra weight.) But, the rest of the book was so good that I’m willing to overlook the moments that were, honestly, off-putting.

I pretty much loved Seth right from the very start. Where can I find a football player just like him? He was a sweet guy. He didn’t fall to the stereotypes you frequently find for athletes in books. He was just a regular guy… who happened to be a star football player. He was close with his family. He wanted a successful career. And, he wanted Jillian.

I loved the scene in the gym where they first officially met. It really set the stage for their friendship and what developed from that. I appreciated that he wasn’t trying to “fix” her, but instead really get her involved in things he thought she would enjoy doing. He never told her she needed to lose weight or set conditions for any future relationship between them based on her doing that. It was just that he enjoyed watching her come out of her cocoon as much as I did and he wanted to be part of it. Of course, things are kinda messy because they’re not supposed to be dating – team rules and all – but there’s no denying how things are unfolding between them.

Chasing Jillian was just a good, fun read. It wasn’t overly angsty or too dramatic. I’m a sucker for friends first stories and I was drawn into this one immediately. I liked how the “team wives” invited Jillian in and the friendships they formed. (And of course, I enjoyed seeing what my favorite couples from earlier in the series are up to.) I really liked both the characters and thoroughly enjoyed reading along as they figured each other out – and learned a little bit about themselves along the way.

Julie Brannagh has been writing since she could hold a pencil. She lives in a small town near Seattle, where she once served as a city council member and owned a yarn shop. She shares her home with a wonderful husband, two uncivilized Maine Coons and a rambunctious chocolate Lab.

When she's not writing, she's reading--or armchair-quarterbacking her favorite NFL team from the comfort of the family room couch. Julie is a Golden Heart finalist and the author of contemporary sports romances.