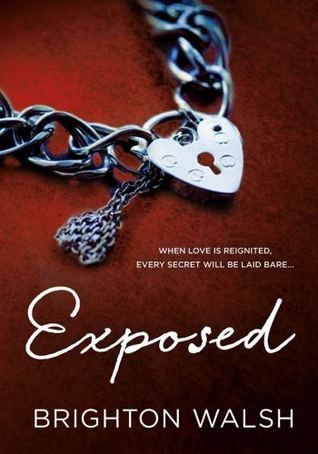 In this sexy, suspenseful New Adult novel, a young woman hiding from her criminal past is taken captive by her ex-boyfriend, the ultimate bad boy.

Evie is about to embark on the perfect life. Beautiful, poised, and engaged to a rising business star, she fits the part of trophy wife perfectly, except for one thing: her entire identity is a lie.

Five years ago she created a new identity for herself, but it all crashes back when something she witnessed years ago comes back to haunt her. Now she's in danger of losing more than her social status.

Determined to protect the careful life she's built for herself, Evie doesn't want anything to do with Riley, the criminal for hire who broke her heart years ago. But Riley has other ideas. He's never forgotten Evie, and to protect her, he steals her away. Hidden from the world, sparks begin to fly as old memories resurface and their passion reignites.

After reading and falling in love with Brighton Walsh’s Captive a couple months ago, I couldn’t help but want Riley’s story. He caught my interest. I was thrilled to get my hands on Exposed early. I really enjoyed this one.

Exposed doesn’t waste any time in getting started. Right off the bat, Riley learns that his former girlfriend is not, in fact, dead and is in serious danger. He rushes in to save her and the story hits the ground running. I found this book a bit darker than Captive, but I was ok with that, even if some things made me uncomfortable.

I’m always a sucker for a second chance love story, and this one was no different. Granted, the situation here was a little more complicated than usual since Riley was convinced Evie was dead and, you know, she’s engaged to another man. She’s changed a lot from the girl who used to run jobs with him. One thing hasn’t changed though and that’s the chemistry they have. The feelings are definitely still there.

I really liked these two together. They just fit. Now, for those worried about her having a fiancé and fear this will turn into a love triangle, I can tell you that’s not an issue. I won’t say more because I don’t want to spoil the story, but don’t fret. It’s not the big deal you might think it would be. The air around these two pretty much crackled with energy when they were together. The sex scenes were HOT. Riley’s a dirty talker and you know how much I love that. Evie holds her own and that makes it even better.

The action and suspense part of the story was as good as the romance. It kept me guessing and there were a couple scenes that absolutely kept me on the edge of my seat, waiting to see what would happen next. There were definitely some twists and turns along the way that took me by surprise. I really got sucked into this story and was anxious to see how it would all be resolved. I don’t read a lot of romantic suspense, but I really enjoy this series. I don’t know if there are plans to continue to a third book, but I’ll totally read another book if there is one.