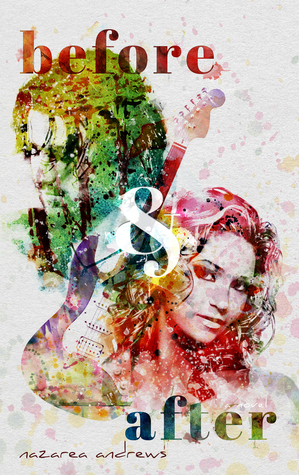 Before & After by Nazarea Andrews
Genres: New Adult, Contemporary, Romance
Publication date: July 27, 2015
Publisher: Self-Published
Format: eARC, 207 pages
How I got it: From the author
Add it: Goodreads
Buy it: Amazon | Barnes & Noble
My rating:

Rike and Peyton fell in love in college.

A boy from the wrong side of the tracks, covered in ink and crooning in a bar is the last person a straight laced girl with a art major should fall for, but his rough edges made her jagged, alive, shaving away the coddled southern princess and revealing a soul wild and brilliant.

They fell in love, despite her family and his past and all the reasons why it wouldn't work--and with their best friends, they made a life. Everyone was supposed to live happily ever after.
They, more than anyone, knows that life doesn't go according to plan.

Rike and Peyton fell in love in college. A boy with a guitar, and a poet's heart, and a girl with freckles dusted over her nose, a perfect fucking fairy tale.

But what happens when the fairy tale doesn't fall apart--but is forgotten?

I’ve always enjoyed Nazarea’s contemporary novels, so I wasn’t at all surprised to find myself completely hooked on the characters and the story from the first few pages. I tend to avoid books where the main character is struggling with any type of memory loss. I just find it so horribly sad. The way this one was told, however, in the alternating Before and After, softened the blow. It was still emotional, but not overwhelmingly so.

I really liked both Rike and Peyton. Though, if I’m being honest, I liked Peyton more in the Before and Rike more in the After. However, I always liked them together, whether in Before or After. I enjoyed watching them get to know each other in the Before and Peyton try to get to know herself in the After. I don’t want to say much for fear of ruining this story, but I thoroughly enjoyed them together. The secondary characters were pretty incredible, too. Now, I never got as much of a feel for Lindsay as I did Scott, but somehow this foursome was just perfect. Scott I loved. He was a little bit of a jerk sometimes, but there was no doubt how much he cared about those closest to him.

Before & After was a relatively quick read. Once I got wrapped up in Rike, Peyton and the struggle they were facing, I couldn’t stop reading. It ended too soon for my liking (but only because I’m a greedy reader) but with a final sentence that packed an emotional punch. (I love perfect last lines in books.) This book was gritty and it wasn’t without some seriously emotional moments. The love scenes – which they were plenty of in the second half of the story – were sexy to the point of being downright dirty. (And you know I love a good dirty talker.) I loved how Nazarea worked in poems and songs to the story. They were beautiful touches to an already fantastic story.

There were only a couple things I struggled with in this book and, while one might be a little spoilery, I have to mention it because it’s something I feel strongly about. In the Before, there’s a moment where reformed manwhore Rike gets annoyed with Peyton and decides he needs to sleep with someone else. WHY WHY WHY?! Why do we do this? I seriously considered putting the book down at that point, regardless of how much I was enjoying it up until then because that is right at the top of my literary no fly zone. There are few things that will turn me off to a book more than the guy (or girl) screwing someone else because they can’t have/are mad at/other reasons the person they’re interested in. UGH. It seriously makes me both ragey and twitchy and that’s a bad combination. But, I am glad I soldiered through. This was the first time I saw what an amazing friend Scott was and how he really wasn’t quite as selfish as I thought from previous scenes. Rike did have to work to get me back on his side though.

The other thing I struggled with is something I’m not even sure I should mention, but I will anyhow. I started off reading this book in eARC format, but there were a large number of grammatical and spelling errors. (I know, I know, we don’t judge books by their unedited ARC and I would never base my rating on that.) I can usually force myself to look past them, but I was struggling with that here. Before I reviewed the book, I wanted to make sure they had been fixed in the final version – plus I was looking for an easier reading experience – so I bought it off Amazon and read the second half in final format. It was a smart move on my part. SO much more enjoyable and I found it even easier to get lost in the story that way.

So, despite the one moment where I wanted to throw my iPad across the room, I thoroughly enjoyed this book. It was easy to fall for the characters and cheer them on through the ups and downs. Plus, I’m a sucker for a good second chance story and I loved how the second chance was intertwined with the initial falling in love. I flew through this book. There might’ve even been tears. I do hope Nazarea writes more about Scott and Lindsay. I could use a good follow-up novella, at bare minimum, to see what happens with them.

Nazarea Andrews is an avid reader and tends to write the stories she wants to read. She loves chocolate and coffee almost as much as she loves books, but not quite as much as she loves her kids. She lives in south Georgia with her husband, daughters, and overgrown dog.

Tags: 4 Star Review, Before & After, In Review, Nazarea Andrews

One response to “In Review: Before & After by Nazarea Andrews”