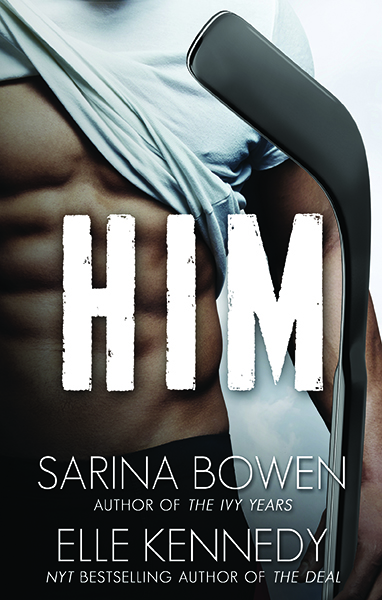 Him by Sarina Bowen, Elle Kennedy
Genres: New Adult, Contemporary, Romance, LGBTQ
Publication date: July 21, 2015
Publisher: Self-Published
Format: eARC, How I got it: From the author
Add it: Goodreads
Buy it: Amazon | Barnes & Noble
My rating:

Jamie Canning has never been able to figure out how he lost his closest friend. Four years ago, his tattooed, wise-cracking, rule-breaking roommate cut him off without an explanation. So what if things got a little weird on the last night of hockey camp the summer they were eighteen? It was just a little drunken foolishness. Nobody died.

Ryan Wesley’s biggest regret is coaxing his very straight friend into a bet that pushed the boundaries of their relationship. Now, with their college teams set to face off at the national championship, he’ll finally get a chance to apologize. But all it takes is one look at his longtime crush, and the ache is stronger than ever.

Jamie has waited a long time for answers, but walks away with only more questions—can one night of sex ruin a friendship? If not, how about six more weeks of it? When Wesley turns up to coach alongside Jamie for one more hot summer at camp, Jamie has a few things to discover about his old friend...and a big one to learn about himself.

Warning: contains sexual situations, skinnydipping, shenanigans in an SUV and proof that coming out to your family on social media is a dicey proposition.

I’m not even sure where to start when talking about this book, but OH MY HELL, I loved it. It’s near the top of my favorites of 2015 so far and if you made me choose, it would probably be my all time favorite M/M book. Yeah, it’s that good. Expect non-spoilery flailing ahead.

I can’t even tell you how quickly and fully I found myself sucked into this book. There’s something about a friends first romance that gets me every single time. After two chapters of Wesley and Jamie’s story, I couldn’t even think of putting the book down even for a minute. I loved how we were teased with their backstory while watching them come face-to-face again after several years. I loved their chemistry and just knew things were bound to be hot and full of feels down the road as they –and especially Jamie – struggled with their attraction and what it ultimately meant. These characters were both so real and it was easy to get wrapped up in their lives.

I loved both Wes and Jamie so freaking hard. Wes might’ve been out of the closet, but there was one thing he wasn’t dealing with – his feelings for his (former) best friend Jamie. Wes didn’t do relationships because he wasn’t ready to give a part of himself to anyone else. Hookups are fine for him. It’s not as though his heart didn’t already belong to another. Jamie, on the other hand, was straight. He’d only had one gay experience and that was with Wes when they were younger. He had no real reason to believe he was anything but straight until he and Wes were face-to-face again. I loved watching his character growth as he came to understand himself a little better. Wes, too, had his fair share of character growth throughout this story. Reading along as they experienced all of this together was magical. It was real and raw – and not always pretty, but never overly angsty.

While the main characters were phenomenal, the secondary ones were pretty remarkable in their own ways. One of the biggest highlights of this story, for me, was Jamie’s family. I loved them so hard. They were so supportive of Jamie in all ways and their reaction to his coming out warmed my heart in ways I can’t even begin to explain. Not everyone has a family like this. I don’t want to spoil anything for you, but just know to expect a couple totally heartwarming scenes with this group. Also of note is Holly. I wasn’t so sure about her at the beginning but I definitely grew to like her so very much by the end of the book.

While I never read a book solely because it’s hot and dirty, it’s often a bonus I thoroughly enjoy. Let me tell you – Him is freaking hot. The times Wes and Jamie are together are more than just sexy, they’re emotionally charged. That’s what I loved about it so much. The devil is in the details and Sarina and Elle did a *fantastic* job of writing the detail. And I’m not talking about the description of events as much as the reactions and emotions the guys are going through. Gods, it’s just so good. There’s no denying the sexy times got my heart racing, but they also melted it a few times. It was obvious with every word just how much these guys felt for each other.

I had incredibly high expectations for Him because I know how incredible Sarina and Elle are on their own. Every expectation was exceeded. Him was everything. This was pure brilliance and all I could ever want in a book. I laughed and cried. I loved the journey. And the sexy scenes? I legitimately thought my iPad would catch on fire. Smokin’ hot. I hope these ladies pair up soon for another book because WOW. I highlighted roughly half of this book because it was so freaking perfect. I could keep talking about this book forever. But really, you just need to take the time and experience it for yourself. Whether you’re a fan of M/M or new to the genre, I think you’ll find something here to love.

4 responses to “In Review: Him by Sarina Bowen & Elle Kennedy”