I seem to be doing a *fantastic* job of putting off these BEA updates as long as possible. Now that we’re rapidly approaching two months out from the show, I guess I should finally talk about all the awesome that was Thursday and Friday of BEA week. Plus, I’m sharing the wealth with an ARC giveaway!

So… picking back up with Thursday. It was a whirlwind of a day. The roomies and I got to the Javits pretty early and staked out a spot in line. Stephanie, Kelly and I met up with some friends at the Harlequin Teen Author Breakfast, which was SO MUCH FUN. They kicked things off with a panel of authors – Eleanor Herman, Adi Alsaid, Katie McGarry and Jen Armentrout – and after that, they and the publicists did a “speed dating” type thing where they each spent five minutes at each table talking about books and such. We had to duck out a bit early to get back to the exhibit hall before it opened, but I was excited to get to chat with Adi, Katie and Jen before we left.

My only real “must haves” for Thursday were Truly, Madly, Famously and a signed copy of City Love. Anything else was a bonus. I got some great bonuses. 🙂

I’m all about having fun with books and bookish folks at the Javits, but the real fun began much later that night during what I’ve dubbed “BEA After Dark.” Roommate Stephanie and I left the Javits kinda early and headed for food at The Houndstooth Pub. Happy met up with us and we had a late lunch and drinks and chatted, then headed back to the hotel. After hanging out and relaxing with roommate Happy for the biggest part of the evening while Stephanie and Kelly were at a pub party, we ended up having an impromptu get together for late night pizza and Cards Against Humanity with Hannah (of Irish Banana fame) and Jen Armentrout. It was worth every bit of lost sleep, too. Such a blast. With a parting shot from Jen, wishing us luck getting up super early to get tickets for Scorched, and letting us know she’d be sleeping in while we were in line, the night ended. 🙂

We rolled up to the Javits suuuuuuuuuuper early on Friday to snag tickets for Jen’s Scorched signing. Thankfully we each managed to get a ticket because that was at the top of my “oh my god I have to have it” list for the day. Also on that list were Until Friday Night and Another Day. (I only got the latter thanks to Happy, who was so awesome that she went through line TWICE to get me one.)

We lounged around on the floor, literally, for an hour or so Friday afternoon, just killing time until Atria’s Meet & Greet. This is where I became the biggest fangirl EVER but tried desperately to hold my shit together. I think I was mostly successful. But, I MET COLLEEN HOOVER. Kelly and I were both like “Oh holy shit this is HAPPENING!” and then one of the Atria publicists came over and took a photo of us with Colleen and Abbi Glines and tweeted it out. So yeah. IT was AWESOME. 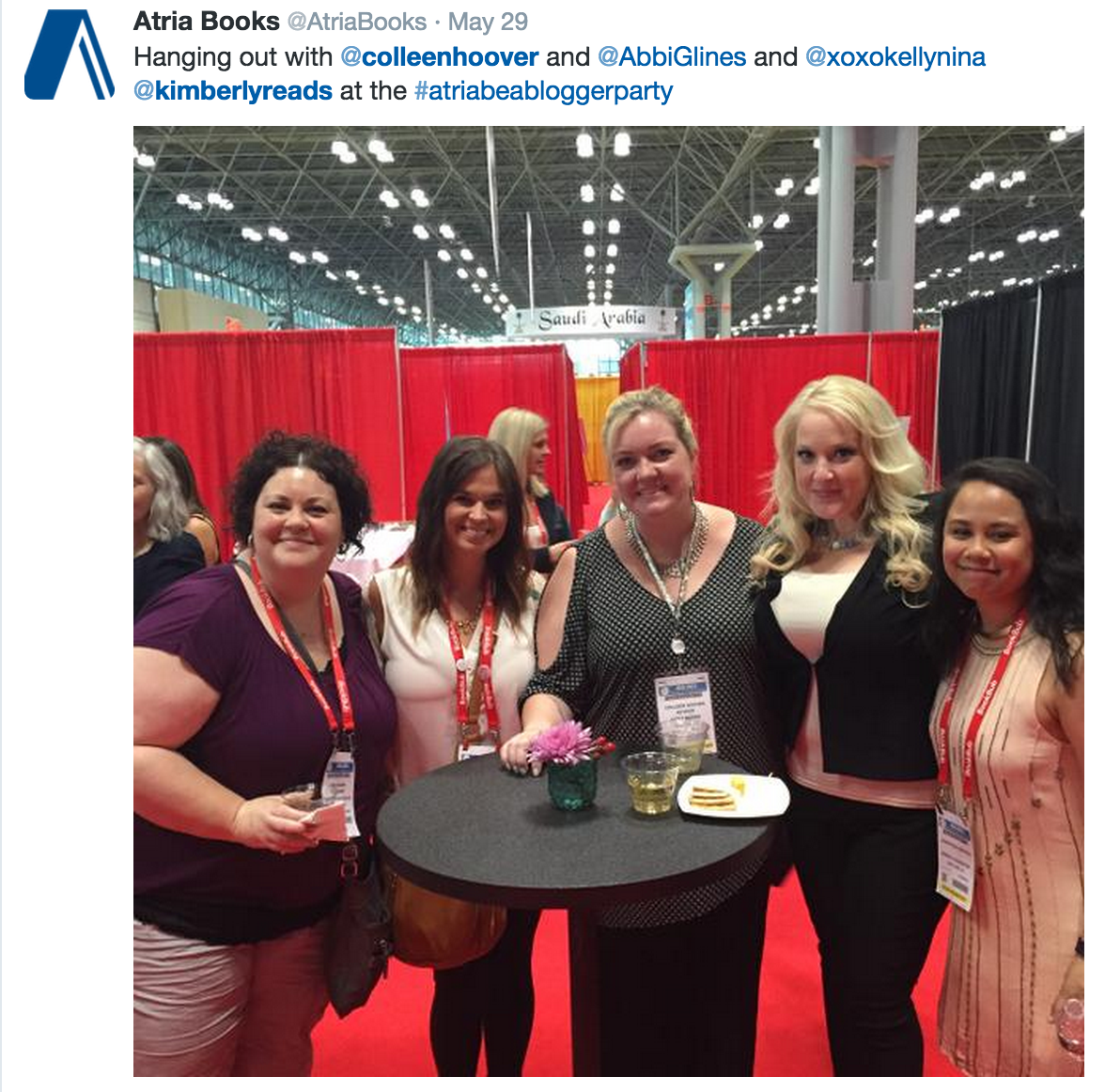 I look fairly calm on the outside but I was flailing hard inside.

Colleen and Abbi were both so kind, funny and gracious. We had a fantastic time talking books and things with them. Someone pinch me, seriously.

We left the Javits after that because, truly, there’s no way to make the day any better at that point right? Wrong.

Next up was dinner with Jen Armentrout, Laura Kaye and K.A. Tucker. We found a little hole in the wall pub and had (a fairly unremarkable) dinner, drinks and lots of fun conversation. After that we packed it up and headed back to the hotel for Cards Against Humanity night number two. It was epic. That’s all I can say.

What a perfect end to BEA.

Oh, and here are all the books I brought home that afternoon.

And some of my favorite totes and other things collected during my time at BEA.

So that wraps up my unbelievably amazing time at BEA. I have thousands of memories I won’t be forgetting any time soon. I met so many incredible folks and had a great time with old friends, too. I’ll definitely be sad to NOT be going next year in Chicago, but as of now I have no plans to. NYC is an easy trip. Chicago, sadly, is not. But, we’ll see… I might wind up caving.

Friday marked the end of my time at BEA, but not in NYC. As I made the decision after last year to NOT go to BookCon because so many reasons, I opted to stick around Saturday and go to a smaller romance author signing in Times Square. I spent the day assisting one of my favorite authors – Tina Torrest – and we had some great chats over wine in the hotel lobby bar. I got to see favorites Tessa Bailey, Kristen Proby, Laura Kaye and Emma Chase again and finally got to meet Monica Murphy and Jennifer Probst. It was too much fun for words. After the post-signing party, I headed back to my hotel, where I saw a man pissing in the street (that was a first) and decided that pretty much meant it was time to go home.

I switched things up and moved into a new room on Saturday night and had the pleasure of rooming with Krista (of Krista’s Dust Jacket) and Valerie (of Stuck in Books). It was so nice to chat with these awesome ladies and get to know them better. We also had our very own surprise guest that night when we had a sleepover with Jen Armentrout. Of course, KP Simmon made a short appearance too. We had a great time talking about books and models and life. And we might’ve even got some inside info about some of Jen’s upcoming books. (No, I DO NOT know what decision Layla makes in Every Last Breath. My gods I wish I did though.)

I drove home Sunday, but that’s not all that exciting. I was just glad I took Monday off because I needed to recover from all the awesome. (High five to past Kim who decided this was the best idea ever.)

This trip, seriously. You guys, I can’t even. Best. Bookish Time. Ever. It was worth every penny and vacation day.

And, now to share the wealth… one lucky reader will win this stack of ARCs! Good luck. 🙂 This is a US only giveaway. 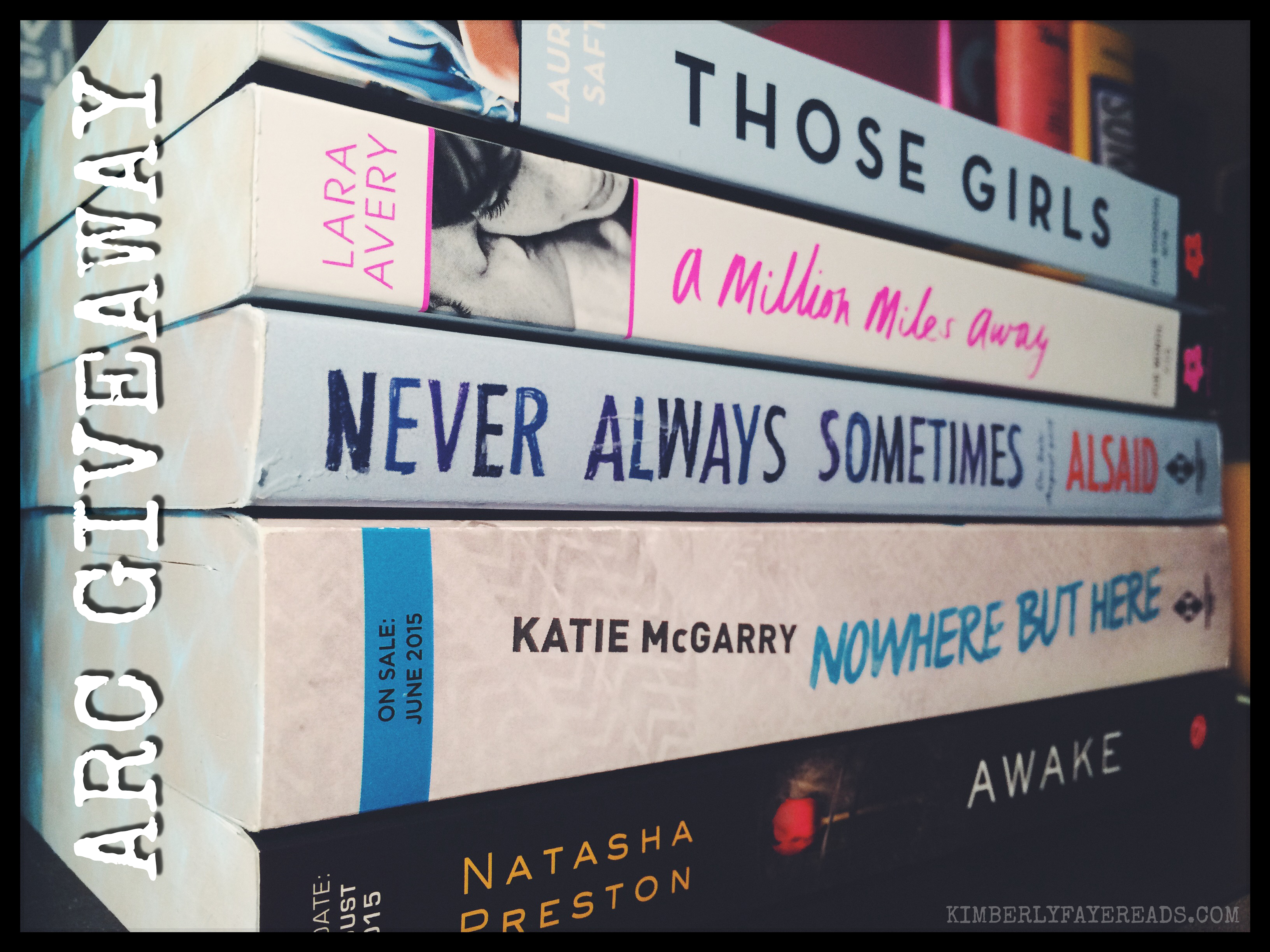